Varese: The Sacro Monte of the Rosary

A spiritual site made of 14 different chapels, deep in the nature

The Sacri Monti – or sacred mountains – are found in the Piedmont and Lombardy regions of Italy. They are a group of nine religious retreats that were created for pilgrims during the 16th and 17th centuries.  Seven of the retreats are in the Piedmont region, and only two are in Lombardy – the Sacro Monte of the Rosary in Varese and the Sacro Monte of the Blessed Virgin of Succor in Ossuccio.

Being in Lombardy, I was committed to visiting the Sacri Monti there. I succeeded in seeing one of the two – the Sacro Monte di Varese. Each Sacro Monte is composed of chapels and statuary dedicated to important aspects of Christian mythology. They each house an impressive artistic complex in the form of chapels along a landscaped path up the slope of the mountainside. The chapels are decorated with frescoes, wall murals, statues, and creative compositions using those media. All are reflective of the lives of important Christian figures such as Jesus, Mary, and the important Catholic saints. Since 2003 they have been listed as a World Heritage Site. View from the Sacro Monte

The Sacro Monte di Ossuccio is dedicated to the Beata Vergine Maria del Soccorso – or, the cult of the Blessed Virgin Mary of Succor. Please be sure to use the benign understanding of the term cult. This devotional group was begun in 1306 in Palermo and was motivated by an apparition of Mary seen by the Augustian priest Father Nicola La Bruna. The priest was dying. The legend claims that the virgin answered his appeal for help and charged him with spreading the word of the miracle in her name – the Mother of Succor.

The Sacro Monte di Varese is dedicated to the rosary. The rosary is the common meditative tool of Catholics everywhere. Rosaries are a popular souvenir of Italy and are available for sale in all the large city churches. They are – of course – unblessed. Blessing by a priest is required to make them sacred. The rose is symbolic of the fertility of spring when the earth rises from the death of winter, and the fleeting quality of life as the flower buds, blooms, and dies. The rose is associated with Eve and Mary – both sacred mothers worshipped for their fertility. These Catholic prayer beads are composed of five sets of ten beads preceded by an intervening bead – there are 4 total, and ending with a medal followed by three more beads that are preceded and followed by a large bead. The rosary ends with  a crucifix (distinguished from a cross in that the crucifix has a sculptural body of Jesus on it). One prays the rosary saying Hail Mary’s on the fifty-three small beads, and Our Father’s on the six large beads. The Mysteries of the Rosary were established in the 16th century by Pope Pius V – famous for his excommunication of Elizabeth I of England for schism, the establishment of the Holy League – a powerful alliance of Catholic nations, and his work on the Council of Trent, which – among many other important acts – defined the heresies allegedly committed by Protestantism. The Sacro Monte di Varese was a project initiated by a Capuchin monk from Monza, Gian Battista Aguggiari, and was constructed over two decades. The building began in 1604 ending 19 years later in 1623. The pilgrimage is located in the Parco del Campo dei Fiori – that is “the park of the field of flowers” – and is about 4 miles outside Varese proper – a very cosmopolitan city with wonderful wide sidewalks, a fabulous central duomo, and an enormous park. 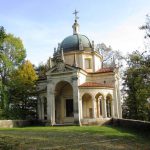 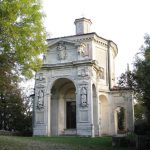 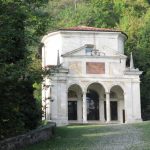 The Sacro Monte di Varese is composed of 14 small chapels situated along a wide, cobblestone path with beautiful flora and fauna, and a wonderful view of the surrounding countryside from the mountain. The path of the chapels is about 1.5 miles long and crests the mountaintop at 2660 feet – truncating at a grand old church in the small town of Sacro Monte (which actually produces their own liquor: Amaro del Sacro Monte). The church is dedicated to the Christian myth of the Annunciation – the announcement made to Mary by an angel who told her that she was pregnant – and is cared for by Romite Ambrosiane sisters. These nuns who live in silence by vow have been on the mountain since their monastery was built in 1474. They are dedicated to the 4th century saint Aurelio Ambrose – a bishop of Milan who is the patron saint of my family church in Regoledo. 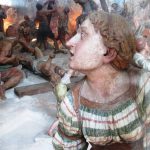 Statues inside the chapels 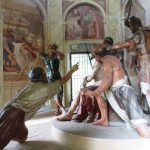 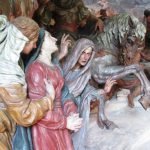