Lucio Dalla’s voice rang out across the Adriatic Sea as we sped in Franco’s luxury dinghy towards the underwater grottos of Gargano.

Franco popped some prosecco and offered us a round of freshly made focaccia. “We have our defects, sure. But as Italians, we are romantic, and in this world, that’s no small feat,” he says and goes back to the “Caruso” chorus.

Here we were, travelling along the coastline of the Gargano National Park. Depths of crystal blue water edged the white limestone cliffs that surrounded us. From the shores of Baia dei Faraglioni, we passed the beautiful bays of Pugnochiuso and Porto Greco. “We call this cave la grotta dei pomodori because of all the anemones,“ Franco said. This literally translates as ‘the cave of the tomatoes’ because of the red marine polyps that line the grotto’s walls.

Franco slowed the boat down as we passed i faraglioni di Puglia, giant towers that popped out of the sea like crumbing kings.  We paused to behold their beauty and then took off again, feasting our eyes on the shingled shore and jagged coast-line of Mattinata.

Monte Saraceno and an ancient necropolis

Much trekking can happen in these parts, including the trek of Monte Sacro which takes you through a prehistoric abbey and monastery in shady undergrowth. However, I think the best way to see Gargano is to climb Monte Saraceno. The mountain overlooks a valley of perfectly pruned olive groves and on the summit lies an ancient necropolis: la Necropoli Dauna di Monte Saraceno.  It used to be an entire civilisation of the Mattina people and where the origin of ‘Mattinata’ comes from.  Looking out you can see the town of Mattinata rising from the foothills with dazzlingly white painted houses to ward off the suns strong rays. 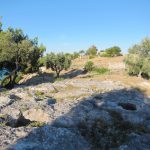 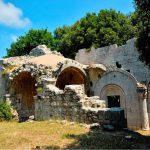 Ruins of an abbey in Monte Sacro 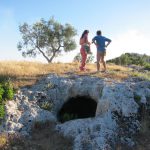 “You have to get the image of a modern civilisation out of your head to understand what this place was like,” said our tour guide and bearded archaeologist Giampietro. I closed my eyes and tried to envisage a whole village on this rugged mountaintop. There are big cavities in the rocky landscape like giant fox holes which were used as the tombs of the necropolis. Unusually, they are in the shape of a uterus as the Mattina and Dauni people had a strong attachment with the earth.  People were buried in the foetus positions because they believed dying was a way of being reborn back into the earth. It was bewildering that this thousand-year-old history was right beneath our feet. We literally stumbled upon it a there were no yellow boundaries or areas cornered off; it was just a wild and free part of the trail. I highly recommend wearing proper hiking shoes for this part by the way unless you have the steady feet of a mountain goat. The base of one of the faraglioni along the Mattinata coast

As dusk began we fall, we drove towards Manfredonia to see the illuminated metal church, Basilica Santa Maria di Siponto. It is more of an art installation than a church, made by the young artist, Edoardo Tresoldi using 4,500 square metres of wire mesh that weigh 7,000 tons, and is a reconstruction of how the Paleochristian basilica would have looked like before it came to ruin in the 13th century.

It looks like a giant 3D puzzle, with detail in every angle, and stands out magnificently against the silvery moonlight from its Roman ruins beneath. We soaked in the beauty of the moment, beholding the starry ghost church as the cicadas chirruped in the summers evening. Cena al riva di mare [Dinner by the sea]. After our busy excursions, it was time for cena which we enjoyed by the seashore, at Lido San Antonio. The waiters brought out millions of antipasti and we dined upon refreshing panzanella, zesty octopus cutlets, slices of local cheese and meat and mussels with orecchiette.  All the ingredients were fresh and we washed everything down with terra minuta wine.

In the town of Monte Sant’Angelo we visited the Sanctuary of Saint Michael the Archangel which is a church, sculpted out of a cave. It was cool and the ceilings were like pumice stone. According to legend, the archangel made several apparitions here in 490, 492 and 1656, hence why the church has been dedicated to him. It is a popular place to visit for catholics. A flight of stone steps led down to the grotto, where we saw the remains of medieval frescoes on the walls. At the entrance to the grotto, there were hand impressions on the stone columns from centuries of pilgrims visiting the church.

I walked in with denim shorts and was swiftly given a piece of material by the priest to cover my exposed limbs, so ladies, I recommend long dresses or trousers. Also there are no pictures allowed. 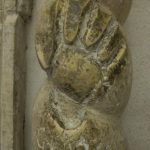 Centuries of pilgrims’ hands have worn away the stone in Saint Michael’s Sanctuary, Monte Sant’angelo 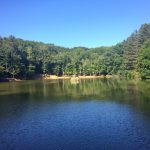 Laghetto Umbra in the Umbra Forest 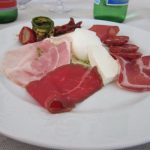 The sanctuary was immense. There was also a section dedicated to the ‘longobardi’ writings which have credited the area with UNESCO World Heritage Site status. The longobardi or Lombards, a German population, dominated the area in the 7th century and the writings found are showcased downstairs in a museum.

The beauty of Gargano is found in the rare combination of sun, sea and shade. You can escape the dazzling heat by winding up the mountain to foresta Umbra and dine in the peaceful setting of its trattoria. You can also retreat from the heat by heading to the shore and diving into the cobalt waters which are cool and refreshing. Best ‘bagno’ of my life

Gargano is bursing with history and beauty. Its bedazzling sea, Saracen necropolis and panzanella make it a part of the world I would definitely recommend exploring.