Castel del Monte is a unique place, UNESCO World Heritage Site. Cars must be left at the bottom of the hill, while people can reach the top on foot or by bus. The view of the Castle, with its strange structure, is really moving. Ahead the big plain called Tavoliere of Puglia, in the background the area of Gargano: really breath-taking (or stinking-breath, if you ate the typical pasta mixed with garlic sauce, as we did!).

Once again you will be impressed by the colour: limestone, white marble and coral breccia. 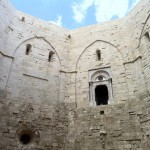 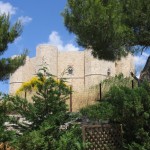 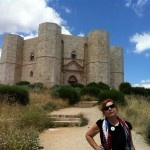 Both the map of the walls and the map of the courtyard are octagonal and the octagon is the most recurrent shape. At every corner there is an octagonal turret and every capitello is decorated with eight acanthus leaves. The door was positioned according the sunrise, so that on the 8th of April and on the 8th of October the sun lights up a particular low relief in the courtyard. Once in the last room the tour can’t be finished and people must go back, just like the motion of the sun at the solstice!

What purpose was this fortress used for? The castle is full of symbols: why is the spiral staircase to the second floor 44 steps long? Why is the main column exactly 22 centimetres of diameter?

Nice to meet you, Federico II

Federico II used to travel a lot, maybe too much. He had been king of different kingdoms, from Germany to Italy (Apulia and Sicily), even the Holy Land. He lost his parents at the age of four, but everyone wanted to adopt him because he was Federico Barbarossa’s nephew. So Federico spent his childhood and his entire life with a lot of different people, from a Pope to an Imam.

He lived a life full of contradictions: first he had the protection of the Church, then he was excommunicated and accused of heresy and Epicureanism, untill he was defined as the Antichrist.

Actually, Federico was a curious eclectic, he used to believe much more in the reason, rather than in the religion. During a Crusade in the Holy Land in 1227, Federico made friends with the Sultan Al Malik and with the king of Egypt, instead of fighting them. Pope Gregorio XI excommunicated him, guilty to have won without bloodshed!

Travelling through all his kingdoms, Federico learnt a lot of languages: he mixed the Sicilian and the Provencal dialects, he had many Arabic texts and he introduced in Italy the German Gothic with Oriental architectural influences. As he was a naturalist, he wrote an essay about Falconry and he invented the zoo. He invented also the sonnet, and last but not least he founded the University of Naples and the Salerno Medical School. He was a close friend of the philosopher Scoto, the mathematician Fibonacci, the astrologist Bonatti, of Teodoro the arab and of the Jew encyclopaedic Cohen.

In other words, he knew a little bit of everything, mixed with his polyglot multicultural inclinations. Inevitably the Popes hated him!

Listen to the old walls

Castel del Monte puts together all those cultural aspects: the palace and its architecture are very communicative. What do they talk about? The general structure reminds of a crown, as a symbol of power: the castle could be indeed the crown on the head of Italy. 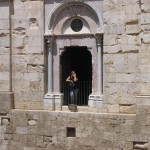 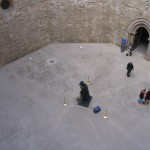 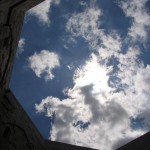 During the different months of the year, the shadow of the castle creates a sort of astral clock, while the central courtyard is pit-shaped, as a symbol of knowledge. The five water tanks, that perfectly correspond to five chimneys, remind of the union of water and fire. The walk along the rooms reminds symbolically the knowledge process. The octagon is between the square (the earth) and the circle (the sky).

For all these reasons, this castle is neither a palace to live in, nor a fortress: Castel del Monte is a Temple of Knowledge, thought by a curious and fascinating traveller.

The relationship between Federico-Emperor and Federico-tourist had a significant role. Unfortunately, Federico II ended his days because of a mortal attack of typical tourist’s diarrhoea. He died in 1250 at the age of 56 because of dysentery at Castel Fiorentino. An astrologist predicted him: “Morirai sub flore”, that is “you are going to die in a place called flower”. Federico had never been in Florence (old Florentia), but he crashed into a little village he almost ignored the name of…