Rocchetta Mattei: visit the castle and meet its Earl

A fairy-tale castle on the outskirts of Bologna

If you follow the Porrettana street number 64, on the Apennine Tosco Emiliano, and you get to Grizzana Morandi you will see something amazing. It is like a cross between the Disney castle and the wizard of Oz castle. What is this magic place full of knife-edged spires, big towers whit antennas and oriental-looking bell towers? It is Rocchetta Mattei. It is famous for its owner and manufacturer who was a wizard and a sorcerer, the Earl Cesare Mattei. He was an eclectic and extravagant person. Princes and royals visited him, he invented the helectromeopathic medicine and became a guru for the Indians from India.

I remember very well how I felt when my parents took me to see the Rocchetta Mattei. It was like the fairy-tale castle: tumbledown, forsaken, isolated and unlikely. Rather than a fantastic realm, it reminded me the Sleeping Beauty palace after the girl pricked her hand and was motionless in her bed waiting for the prince to wake her up after years and years of sleeping. Rocchetta Mattei was awakened too, not by a prince but by a bank: the foundation of Saving and Loans of Bologna, because it took the money of a prince to bring it back to its greatness! The white knight, in this case, was the Chancellor of the University of Bologna, Roversi Monaco. Craftsmen and restorers, such as Marietta Parlatore who is the restorer of angels’ lab, worked on it and now Rocchetta Mattei is a place where lots of projects and events take place. 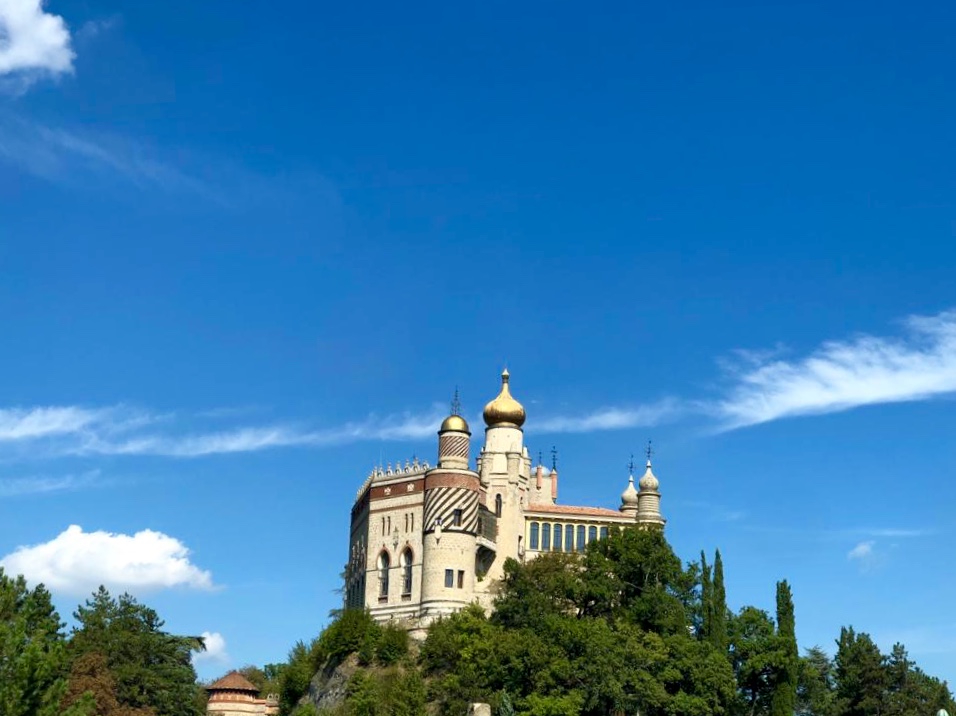 So I saw it tumbledown, crumbling, covered with dust, with the charm of decadence and forsaken that let you imagine what it may have been and that make you feel the past trying to imagine pomp that are not there anymore. Now I came back to visit it and I was invited by Marco Melluso and Diego Schiavo. These two are directors and authors of a docu-commedy that describe the history of Earl Mattei: The Magic Earl.

The Earl Mattei, the magic earl

The Earl Mattei built the Rocchetta in about ten years and he move there in 1859. He died there when he was 86 years old. It was the 1896 and he was buried in a sarcophagus designed by himself where he got engrave a special phrase, still cryptic but full of meaning. A phrase that explain the dimension of the universe, and for once, with no mention of his name: “The stars are so far that just one ray come to us even though the light moves 299.792km per second. The annual orbit of earth around the sun is 216million kilometers. The earth seen from those stars would be a little point and humans would be atoms of this point in the universe. We brag ourselves.”

It is said that at his funeral took part 4000 persons, some for gratitude towards him others because at that time it was used to give an offering to the participants. It is worth to tell who he was and how he was considered. First of all how did a man of a rich family from the south of the Po valley, to be specific Budrio, got there? 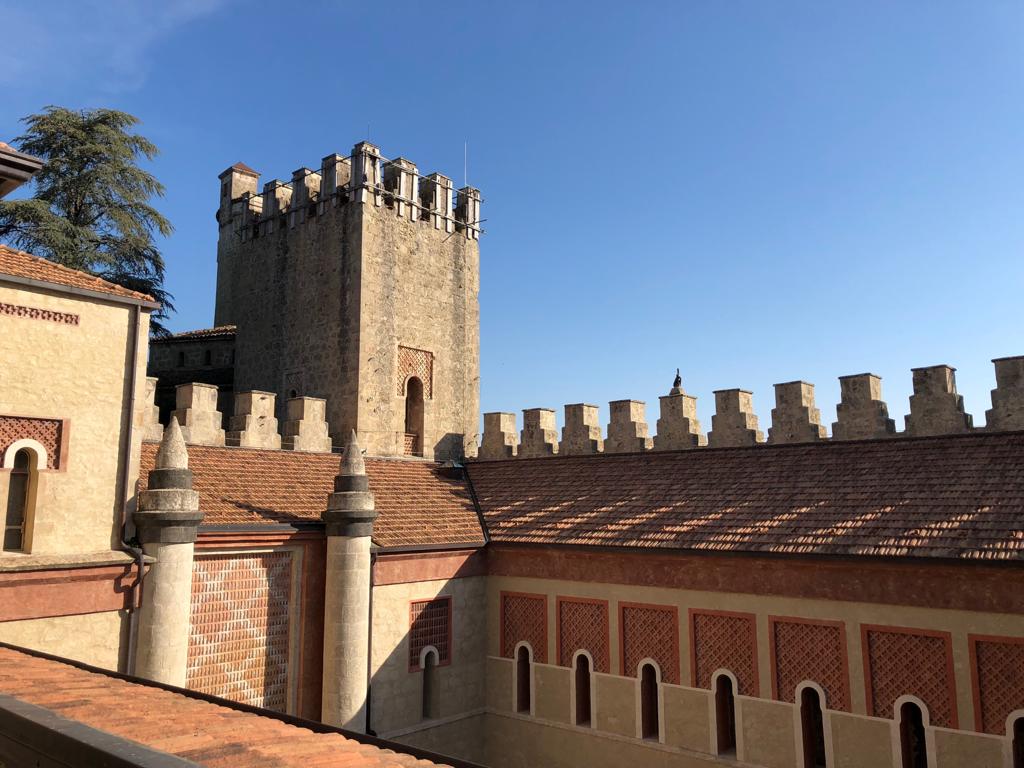 His sister-in-law owned property in that area, he came to visit her and heard that there was a lot of magnetism there. He felt something magic about that. Maybe that area is actually characteristic: this is a strategic place. Here you can find the Blue Mountains, so called by the Etruscan because they appear blue because of a characteristic light show. Here stands the Ovolo Mountain, at is top there is an ancient sanctuary connected to the primordial goddess Pale. It was famous at the time of the crusades because the Crusaders and the Templars used to cross this street to get to the Holyland. Moreover, there is Rocca di Vigo, with a little church nestled in the rock, and Vigese Mountain in a pyramidal pattern, one of the symbol of mystery. In the place where today is Rocchetta there was a matildic castle. The Grand Duchess used to pass through this way to get to Rome in her many visits to the Pope that was her friend. In the Castel of Costonzo, during the Middle Age, there were alchemists. The Castel is a FAI Heritage, you can visit it and, unlike the Rocchetta, it is perfectly preserved in his ancient aspect from 1300. There were made the first medicines and remedies… our earl continued that work.

The Earl Mattei, however, was not exactly an earl. He became an earl because his family gave to Pope Pio IX a property in Ferrara. He was neither a doctor but a self-thought person: he dedicated his life to medicine because of his mother. She was affected by a bad disease and was not cured by the allopathic doctors of the time. He got into the alternative medicine, that today is called homeopathy, but not only: he added an ingredient that he kept secret. Something that had to deal with the energy and that he called helectromeopathy.

The earl who invented the helectromeopathy had the desire to invite people from all over the world to the Rocchetta, he wanted to do this because of the particular energy that he felt in the rocks where the Rocchetta was placed on. Preparations were all in the Rocchetta full of antennae, in the tower of the visions. Certainly the electricity came from there. I agree with this idea: that must be a particular place connected to the ground magnetic, there are some meridians of the earth, such as in our body, where the energy comes out and maybe this place is one of those. The Rocchetta, the only one that the earl Mattei had build, was connected to other little luxury villas around the country. It was like a sort of “luxury hospital”! It became very famous and here came lots of very important persons: the Russian tsar, the princess Sissi, Italian royals, Dostoevskij, but even normal people, even poor people to which the earl gave remedies. The waiting to see the earl was long, maybe because the benefits were in the same nature of the place from where the famous energy came out, the earl visited them and gave them fluids and granules. The earl combined a secret to this, maybe the particular energy emanating from the mountain? We don’t know, his secret has disappeared with him, he didn’t even tell it to Mauro Venturoli who saved him from a financial loss. Neither to Mary, his daughter who was born when he was 80 years old. Her mother was Agrippina, the earl’s trusty and faithful caretaker. The earl liked having parties and lunches, he had a music room, friends like Rossini and a court jester. He got rich with his remedies and he had deposit all over the world. In India he is still considered a guru and his remedy is still distributed with his photo on the bottle. When his adepts visit the Rocchetta is like a pilgrimage, for them to get inside the Rocchetta is like entering in a temple and it is not hard to believe to because of the Indian architecture. 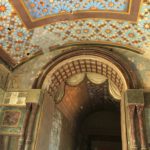 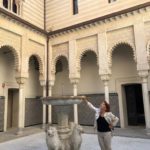 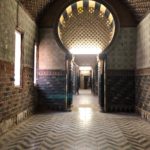 The Rocchetta is a huge scenery! It is easy to say where the painting represented scenes from theatre, especially after the restoration done using poor materials. The chapel where is located the sarcophagus of the earl is the reproduction of the Meschita of Cordoba. It is important because from here you can see that the Rocchetta is made by humble materials: plywood, drywall, papiermache, the mosaics are painting that simulate mosaic, the capitals simulate the marble, the ceilings are painted canvas and so on and so forth. The yard at the entrance was the same of the yard of Alhambra in Granada just smaller. It had a fountain at the center and Arabian writing on the architraves. In this case the tiles came from Seville, the other decorations were made in a local furnace made it open by the earl on purpose. The furniture disappeared during the years of abandonment but the most important thing that the earl owned was his library with lots of books.. important books because the earl was self-taught and we would like to know what he used to read. 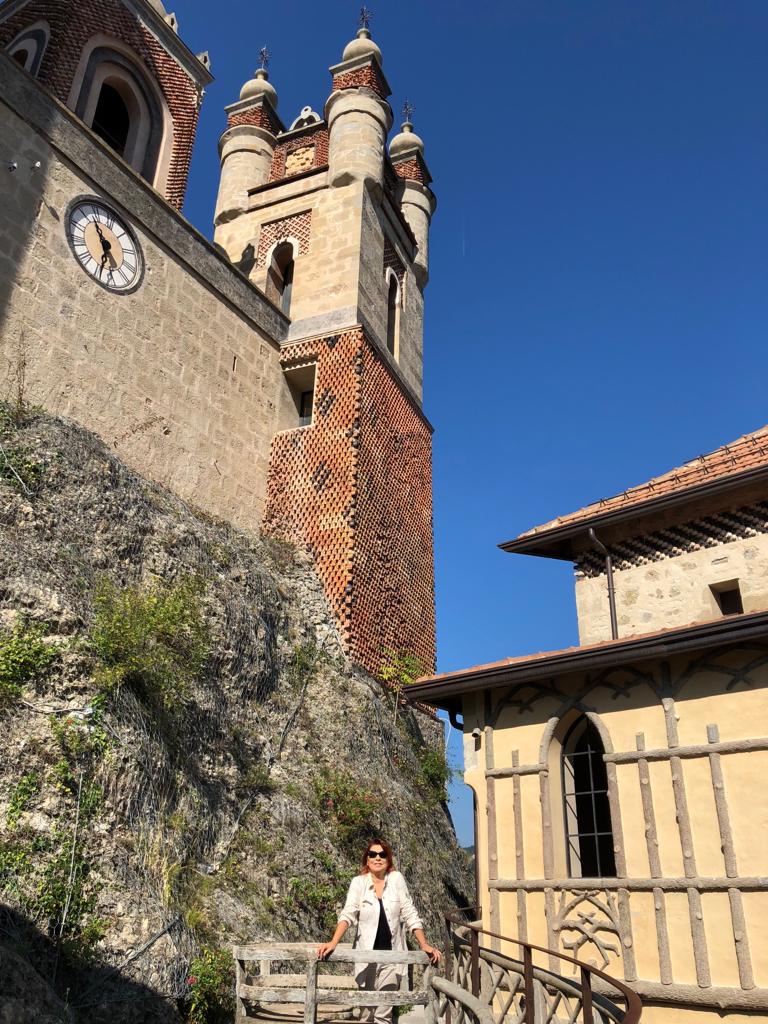