Some places where you can eat local street food

We are in Bologna, determined to find out why the city gained the epithet the Fat. In other words, we want to try some local products on site… Our tour starts from the beautiful Piazza della Mercanzia, one of the favourite meeting places of the locals. The magnificent Palazzo della Mercanzia is the seat of the Chamber of Commerce, Industry, Agriculture and Crafts. A small balcony, made of marble and located over the two Gothic arches, was once the place where the judges of the merchants’ court read their sentence.

From here we access the area of the city known as Quadrilatero for its shape enclosed by the main squares of the city. It is the old city market, where the most traditional commercial activities take place. We cannot help but spend some time wandering through the many food stalls and shops. Here you can find fresh and homemade local products, from the tortellini to the mortadella (known abroad simply as Bologna), and do not forget to try other kinds of filled pasta, such as ravioli and cappelletti, as well as other types of salami. In this spectacular market there is nothing you cannot find: all kinds of meat, fish from the Adriatic Sea, cheese, pastry, wine, bread, fruits and vegetables. All these colourful small shops in these narrow streets are such a sight for sore eyes that they are photographed as authentic living museums of local culture. 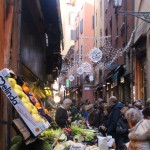 Market at via Pescherie Vecchie 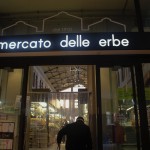 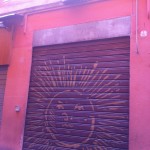 From via Clavature it is worth visiting the two floors of the Mercato di Mezzo (Middle Market). Recently restored, it is one of the most representative historical places of Bolognese food culture. So come in and eat some delicious local products on site! If you liked it then you should also see the Mercato delle Erbe, accessible from via Ugo Bassi.

Another place that the locals really adore is located in vicolo Ranocchi (between via Pescheria Vecchie and via degli Orefici). In this narrow street you should look for a little sign that says vino above a little door and you will find the oldest tavern of Bologna: the famous Osteria del Sole. Since 1465 it provides the bolognesi with all kinds of local beers and wines. One little advice: buy some bread, cheese or salami at the shops on the streets and bring them in the osteria, it is perfectly allowed and even suggested because they do not sell anything else but drinks. And enjoy the company of the locals in a tavern that plays an important role in the history of Bologna itself! (Osteria del Sole is closed on Sundays).

In the evening the streets of the Quadrilatero become the ideal place to have an aperitif before dinner. The shops make way for bars and taverns and the bolognesi gather to drink a glass of good wine accompanied with some tastes of local food.

As for the wine, noteworthy are names such as the Albana, the Trebbiano, the Barbera and the Sangiovese. The Pignoletto instead matches perfectly with a dish of tortellini in broth.

Finally you should know that Bologna is famous for two major events that take place in Piazza Maggiore every autumn and gather lots of visitors. So if you are coming in October or November make sure you do not miss the MortadellaBò and the Cioccoshow.