Top-rated places to visit in your next sighseeing tour

Bologna is definitely the city of porticoes: 38 km just in the historical centre inside the walls around the city. Not bad! Don’t panic if you feel a bit lost because, you know, they look the same almost everywhere at a first sight. You know, Bologna has got the oldest University in the world: in the Middle Age people needed to create some space for all the students incoming and they decided to wide the upper stage of the building towards the street. That means: porticoes. A lot. Porticoes are a way of life: meeting point between the open public space and the inside, perfect for rainy days. At a second glance, they are not the same at all: my favourite is the one in Strada Maggiore, from the two towers to the avenues, especially around the Church of St Maria dei Servi, where takes place a famous Xmas Market in december. 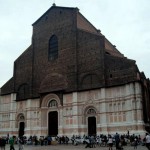 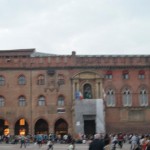 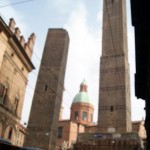 First the main square: Piazza Maggiore, with the famous Church of St Petronio and the stoned platform ahead known as crescentone (i.e. flat bread). Do not cross it if you are waiting for graduation and you are superstitious! The Church is great, but as you can see the façade is not finished: Bologna used to belong to Papacy in 300 A.D. and the Pope didn’t want this building to become bigger than St Peter in Rome, so he stopped the works.

On this square Palazzo D’Accursio (the building of local municipality) with Morandi Museum inside at the first floor. Just next, the building Salaborsa, public library and covered square where you can step literally on some Etruscan ruins walking on a glass floor. In front of it, the building of Podestà, closed to the public except during the events taking place inside, hopefully you can attend one of them, the frescoed main hall is amazing. The fountain of Neptune by Giambologna is known as “the giant”.  The tourist office Bologna Welcome is on the main square too, don’t miss a visit to collect some tips and flyers about the event calendar. A little jewel not far from the main square is the sanctuary of Santa Maria della Vita (i.e. St Mary of life), housing a masterpiece of Italian art: the sculptural group of “Sorrow over Dead Christ” by Niccolò dell’Arca. Then you can climb the Asinelli Tower (the straight one, the leaning one is called Garisenda). The climb is quite hard, the stair get more and more narrow, but on the top the view is worthy: you can spot a lot of hidden gardens inside the buildings, green spots in the red of roofs.

Piazza Santo Stefano is the best place in town: a unique round square with a complex made of 7 different churches, built one inside the other. Every second Saturday of the month here is a antiques market. 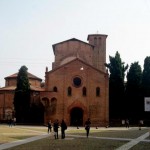 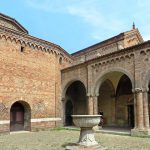 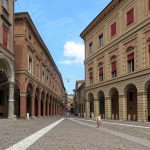 The University area is mostly around Via Zamboni, where you should visit Palazzo Poggi: inside, the classroom where the Italian poet Giosuè Carducci used to teach and an interesting museum of old maps and anatomical waxes. Not far, in via Belle Arti, the National Pinacotheque with many painting by the Carracci brothers and Guido Reni. A couple of museums you should visit if you have time: the Museum of Modern Art (MamBO, via Don Minzoni) and the recent Bologna’s history Museum to discover and revise the changing of the city during the years. You know, the cathedral is not St Petronio on the main square, but St Peter on via Indipendenza. Pay a visit also to the Church of St Domenico with its wood choir, the St Francis Church with the monumental tombs of Accursio family and the lovely church of St Giovanni in Monte.

If you are looking for a great view, you can also walk up on the hills all around Bologna, the most famous hill is the so called Colle della Guardia (i.e. Guard Hill), where is the Sanctuary of the Madonna di San Luca. Are you well trained? Then you can go on foot until the Sanctuary, from Meloncello Arch it takes 4 km and 666 arches of porticoes. Whatever, you can also catch the nice red&blue train San Luca Express! Book your tour on the City Red Bus with #italiaslowtour special deal!