A rural side of region Apulia you’d never know

The candor of cathedrals pretending to stuck directly on the Adriatic Sea, blue at last… The Tavoliere land waving of wheat ears… The Trulli buildings, unique in the world… The Gargano with its terraces: amazing natural viewpoints on the sea and on the never-ending plains… And then, going down, the baroque Salento area between two clear seas. Not bad for one just Italian region, but Apulia is even more, you know!

Let me introduce you a secret Apulia, the one of the Mounts Dauni area, next to Campania and Molise regions. Here you find peaks above 100 mt and up to 1.500 mt high, with dense woods suddenly opening into wide valleys. You may feel hypnotized, unable to catch it all in a glance… That happens when the horizon looks far and the scenario is changeling, full of colors and shapes.

The villages are perched on the Mounts Dauni here and there, higher than usually here in Apulia, considered almost flat.  Here you can breathe fresh mountain air! I told you, that is the other Apulia, little-known but worthy to be discovered by many curious and sensitive tourists. Among all the villages, Bovino stands out, probably the most beautiful one. But instead of making rankings, I suggest you to visit the most of them! 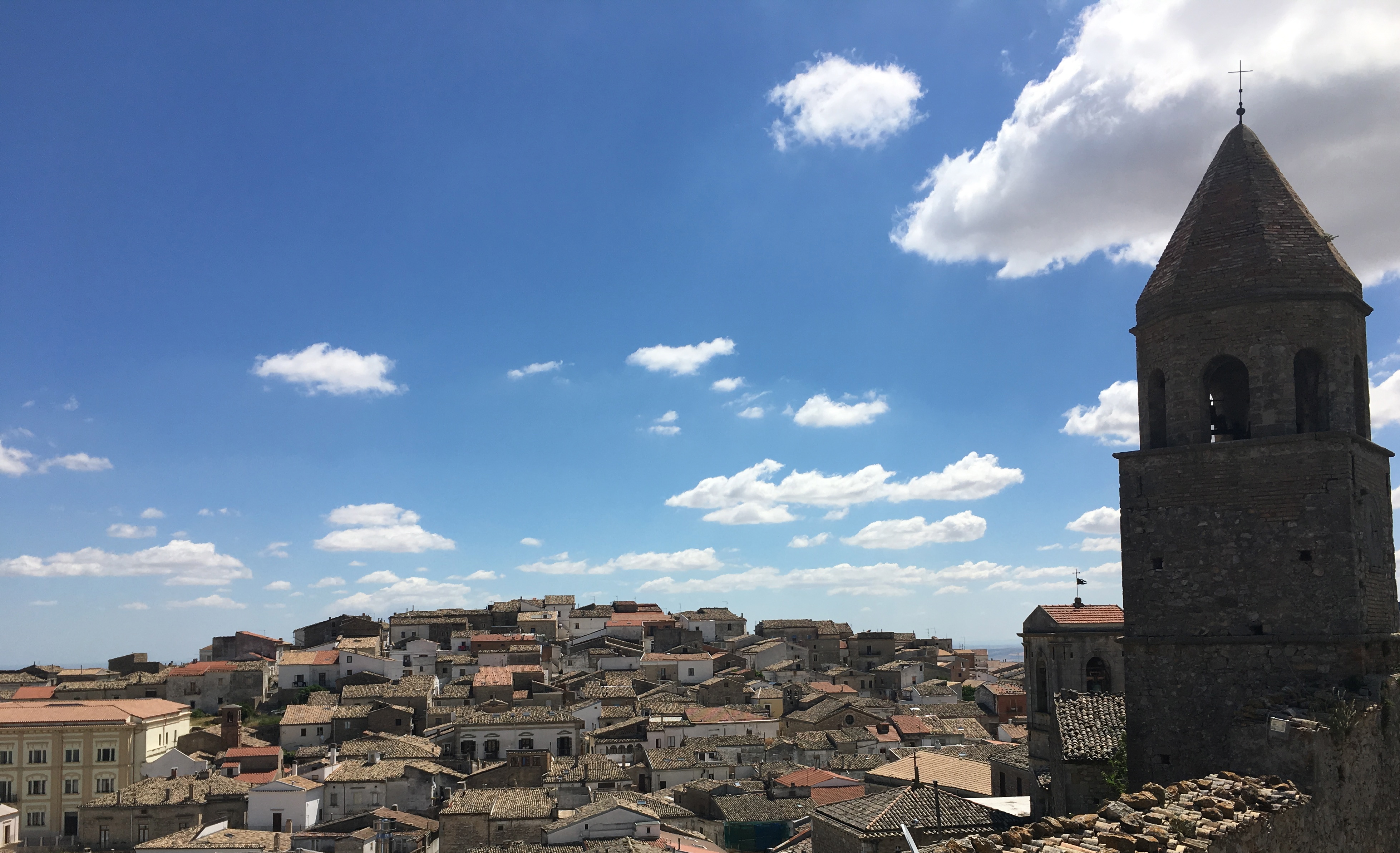 Bovino sounds like the Italian word for Cattle, but it is not what it means. The name came from Vinibum, an ancient roman centre mentioned by Plinio, founded in the 3rd century B.C. by the Dauni people, where Annibale camped out in 217 B.C., before the famous battle of Cannae. You can still spot some Roman traces inside the “Cennato cellars”, some ancient cellars dig in the sandstone, once connected to the Roman aqueduct.

The Carlo Gaetano Nicastro Civic Museum – inside Pisani Palace – stores more ancient traces and interesting artifacts, like a couple of great gravestones. More than a man and a woman, they represent the idea of male and female, getting deep emotions to whom looks at the ancient in the right way. The two stele remind to Mother Goddess, but since ancestral has not time, also to Modigliani and the Art Brut: the art made by those who didn’t learn the art, but found it deep inside his own grief, segregation and mourning. The female stele is a slab with no limbs and head, it looks just apparently flat and the relief is due to its strong symbolism: a bust with no limbs and head where you spot a necklace, a big x sign dividing the breast, the bellybutton and the pubic triangle. The male stale is very intense as well, defined by a bloodied knife. 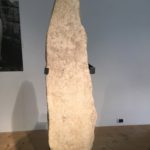 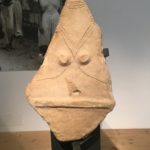 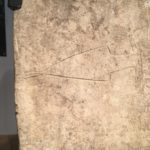 History and the Castle

If Bovino is Today one the most beautiful villages in Italy, it owes it to its Medieval, Renaissance and Baroque history. Here, the Langobards, Byzantines, Normans, Svevi and Spanish people passed by. All of them left their traces: most interesting ones, the amazing portals of some buildings, with bas-reliefs and coats of arm. Surprisingly well conserved and high quality. A real walk into the past, not for saying! 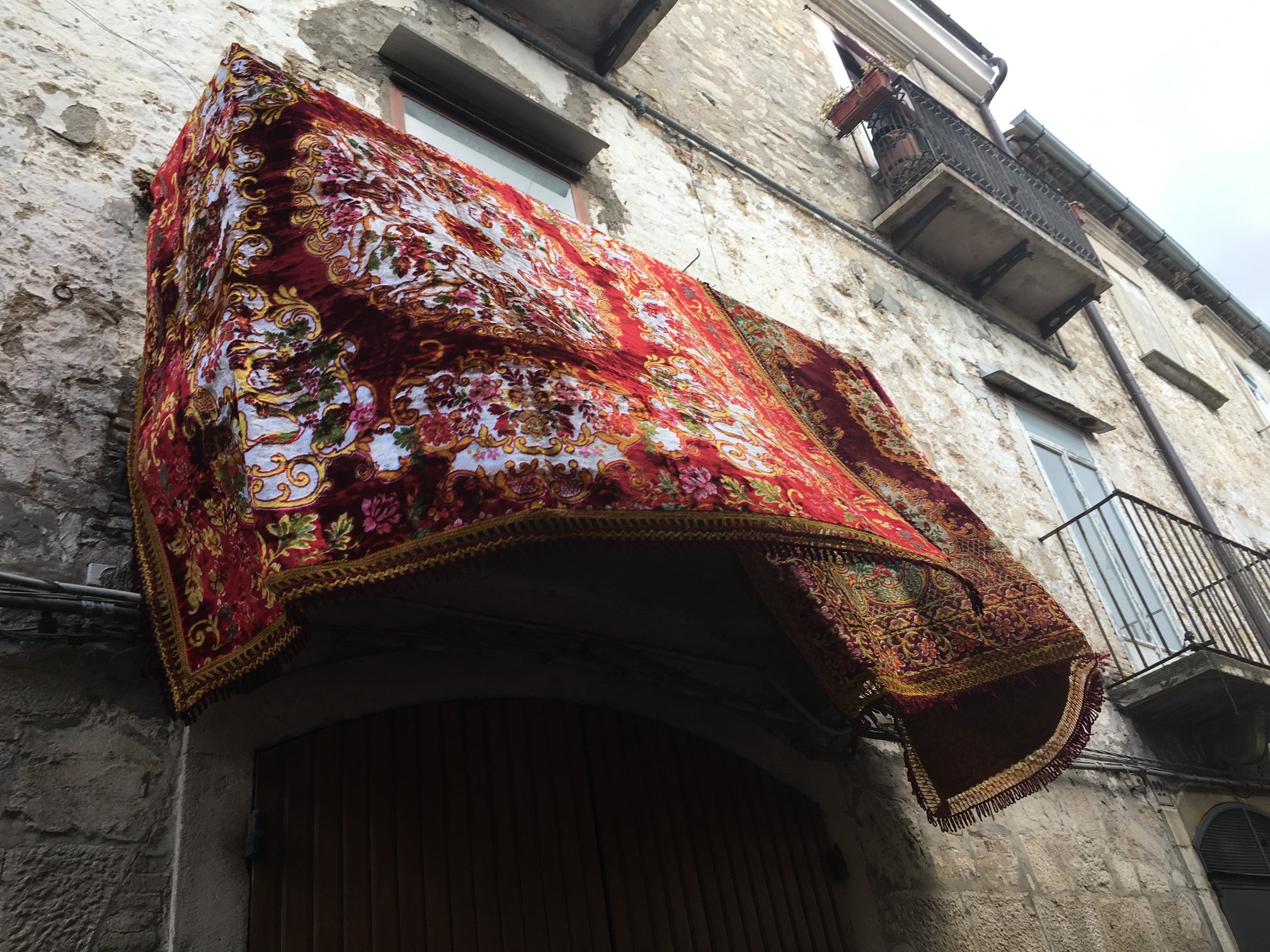 The Ducal Castle is impressive, dominating whole “Bovino Valley”. Today it is a great scenario to admire, but once it used to be a scary place because of the bandits assaults against the convoys, obliged to cross this unique route connecting Campania region to the Adriatic Sea. The ancient Roman Fortress was occupied both by the Longobards and the Byzantines, but by the end of XI century it was destroyed by the Normans, building in there the castle, on the ruins. Placed in a strategic position, the Castle was used by the Normans and the Angevin till it became the house of the Family De Guevara, high rank Spanish nobles, who used to host here some famous people like Bernardo and his son Torquato, Giovan Battista Marino, Benedetto XII and Maria Teresa from Austria. 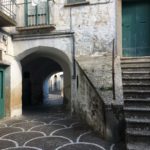 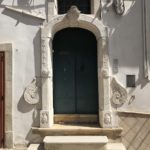 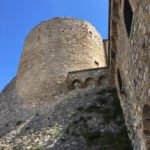 Since 2008, the Castle is now on rent by the local diocese. Thanks to some European Funds, year after year the Società Cooperativa Sipario (a cooperative association) works on the restoration of the whole building, where you can find many ancient paintings of Caravaggio’s School, sacral items, 16th century statues and silverware from 1000 to 1900.

The beautiful St Mark Cathedral is an interesting Romanic monument and a living meeting point for the small Community of Bovino. I recommend you to repeat the experience that accidentally happened to me (I had to thank the God of tourists, I guess): as my hotel was in a pedestrian area, I decide to call a cab directly to the Cathedral square. It was a Sunday morning dawn and I sat there waiting, in advance as I always am when travelling. I decided to sit on the steps of the church, to enjoy the silence and that perfect scenario made of low houses full of flowers on their balconies, looking to be bent in adoration of the impressive holy church. That is how a people-friendly place has to be, I thought: the greatness of the church, the modesty of the square…

Then a bell rang loudly and broke the silence: suddenly a crowd of faithful filled the square, everyone standing and head bowing, looking so peaceful while getting closer to the holy place. Is that all?! – you may say. Definitely! I had the privilege to see a whole community waking up, as it could happened two, three or ten centuries ago! Such a magic time travel, I cannot be more grateful. 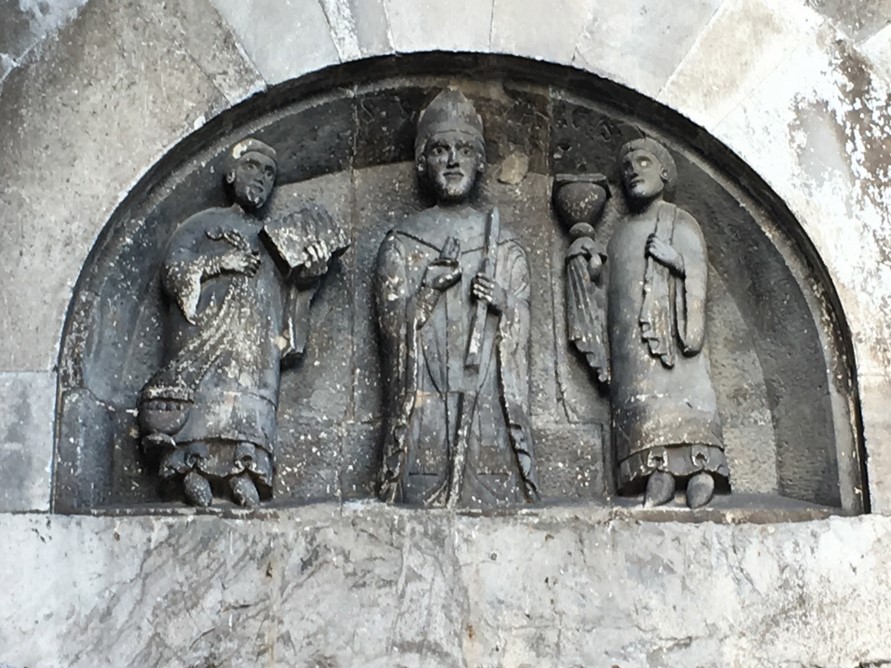 The local institutions are working hard to get this borgo known: it doesn’t offer much to persuade young people to stay and it is doomed to be abandoned, this way – as many other ones in Southern Italy. Speaking clear, this kind of precious tiny places can be saved only by tourism, that is worthy here by the way! But tourists have to be aware it exists, informed and invited.

I saved my matter for last: let’s talk about local cuisine and products, finally! We feast at the end, a feast full those particular sensations that only the ancient and simple cooking can give. The cuisine is made of the simplest of the dishes, made with the highest quality ingredients: fresh pasta made with the finest wheat flour – see the Senatore Cappelli wheat variety -, extra virgin olive oil from Mounts Dauni, the delicious cold cuts from local black pigs (an ancient pig breed from Mounts Dauni, saved from the extinction, now semi-free raised, with biological methods). 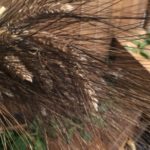 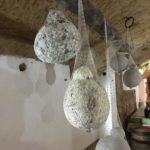 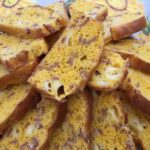 Special mention for the wild herbs: wild rocket,wild thistles, marasciuoli, wild mustard, dandelion, chicory, turnip greens, cress, Swiss chard, wild fennel, wild asparagus, borage and nettles… Some kind of pillar of home cooking, that some clever cook proposes also in his restaurant. Essential in the making of traditional old recipes, as the panciotto, as a sauce for pasta, on the bruschette, sauteed or just boiled with lemon and oil. Delicious!

Speaking of wines, here you can choose between three: the famous Nero di Troia, the Tuccanese (an interesting red wine, coming from a rare local vine) and last but not least the Cacc’e Mmitte, a red wine produced nearby – in Lucera – certified as an excellent product by EU. 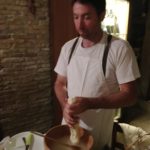 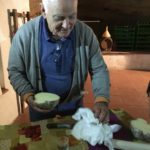 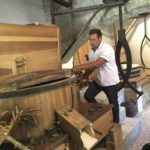 My restaurant advices: you can trust Nicola Consiglio, a good Chef taking care of traditions. He cooks good stuff, down to Earth… You won’t find at his restaurant any attractive food with no taste. I recommend his La Cantina restaurant or the “agriturismo” Piana delle Mandrie.

Another worthy experience is a tasting time at the Gola d’Ercole Cellar, where Carlo di Giovanni will guide you in a 10 meters depth dungeon… Here takes place the tasting of wine, pecorino cheese and caciocavallo podolico cheese of many varieties. Don’t miss a visit at the Lo Moleno, an ancient water windmill built in 1810 on the Cervaro creek. Managed (and renovated) by Grasso Family who restored it to its primary function. Here you can see the productive process explained live by the miller and, at the end, get a taste of the flours produced with some fine Senatore Cappelli and Bianchetta variety… in the shape of bread-balls, pizza with zucchini or potatoes topping, herbs omelettes, quiche stuffed with cheese and cold cuts, bruschette with bittersweet home cooked zucchini. 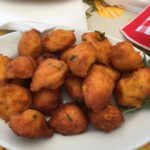 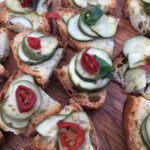 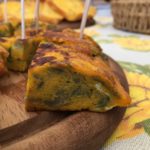 The whole borgo is a sort of scattered hotel, so that you can stay in some B&B here and there. Ask the Pro Loco for some advice, I was addressed to Palazzo San Procopio B&B and I was lucky as I could enjoy the amazing Le Pietre del Borgo SPA, included. Some wellness time never hurts! 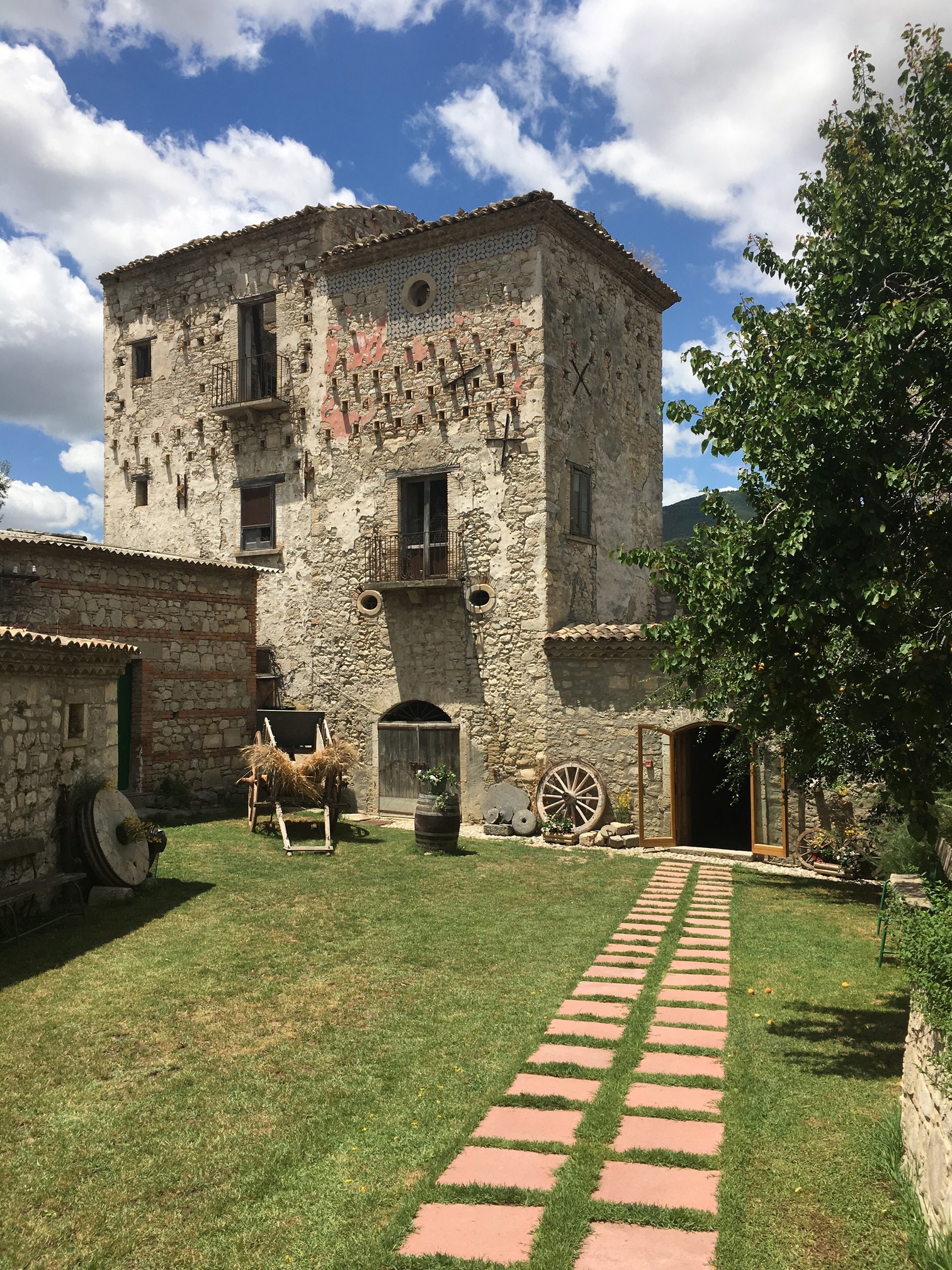