A welcoming place on the Dauni Mountains, Puglia, Southern Italy

We were in Biccari to attend the annual National Celebration of Authentic hamlets. Biccari is one of Italy’s “Borghi Autentici“ (i.e. authentic hamlets or historical villages); there are hundreds in Italy that are organising themselves to offer hospitality to tourists and travellers.

Biccari is in the South, in the region Apulia. The surrounding mountains are known as the Dauni mountains, in memory of the early populations, that probably came from the sea to inhabit these lands before the Romans.

Visit the “borgo”, its huge cathedral devoted to St Mary of Constantinople and the Monastery nearby with the Lake Pescara. Go wandering in the narrow streets and taste some local specialities like the excellent white pizza made in the open oven, don’t miss the chance to dance some exciting Pizzica… 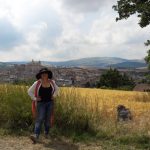 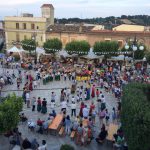 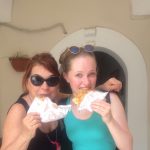 We’re off to Biccari.
The hamlet that hosts the National Celebration of Authentic Hamlets.
A significant operation that we’re going to tell you about.

Biccari is one of Italy’s authentic hamlets.
There are hundreds in Italy that are organising themselves to offer hospitality to tourists and travellers.
To all those wishing to experience what it means to live in a small, hospitable village.
Welcome to Biccari, on the Dauni mountains!
We are kindly greeted by the Mayor.
So where are we staying?
In an apartment managed by the “community cooperative”
that’s made up of young people who went away to study and then decided to return to Biccari to invest in the area.
Mr Mayor, tell us how you do it.
We’ve endeavoured to promote the dormant resources to extend our village’s accommodation.
Ours is a hamlet-hotel, open to all those visiting the Dauni mountains.
I like it already.
We’re here and it’s wonderful and cool.
The entire mountain area around us is there for us to visit. We have Lake Pescara,
then there’s Apulia’s highest peak, at 1152 metres, and there’s also an adventure park.
Because it is a small village of people who have emigrated, there are many uninhabited dwellings.
Above all in the historic centre.
Se we had the idea of using some of the area as a multi-building hotel.
You can’t get a more hospitable community than this!
As we enjoy the pleasing prospect of our accommodation, Signora Lucia arrives too.
She’s a lady who lives nearby who has come to see what’s going on.
The house was renovated and it has changed a lot from how she once knew it.
What was once the bedroom is now the kitchen.
But it seems she’s quite happy with the outcome.
“It’s all so different!”
“Let me see how I’ve turned out. I’m 91, I was born in 1926”.
Young and old, united in the battle to keep the hamlet alive.
Beginning with the very young who are celebrating to music and dancing in the square.
All of this is also done for children.
It’s the best way of persuading them to stay in their home village.
Yes, they’ll study and travel the world, but they can also come back to Biccari to stay.
The village in actual fact has an archaic history.
The surrounding mountains are known as the Dauni mountains,
in memory of the early populations, that probably came from the sea to inhabit these lands.
That was before the Romans, who conquered and wiped out all trace of them.
Wiping away the memory of the vanquished is a story that has been repeated for thousands of years.
Anna is passionate about the identity of the city and pride of the south.
We’re in Largo dei Mille (Square of the Thousand – i.e. Garibaldi’s), that continues to retain its name.
Even if the Thousand really aren’t much appreciated.
After 150 years we have come to understand that these Thousand men didn’t really do much to help the south.
Perhaps it should be called Largo dei Dauni, and so turning to ancient history.
Restoring our roots, but the best of them.
Further on we find a ghost building, with its half-open windows.
The door still bears the scars of the violent pickaxe blows administered by the brigands in revolt.
This is the main door with the portal and the coat of arms of the Menichella family,
the nobles of the time. It dates from the 19th century.
And these are the marks left by the brigands who attacked the master’s building.
The brigands would hide in the woods and would endeavour to mount resistance against the noblemen.
But now, however, it is let out. It is rented.
Biccari was a very important diocese.
Evidence of this is to be found in the enormous cathedral dedicated to St Mary of Constantinople
that can be admired even more from afar.
In the streets of Biccari I also come across Elizabeth, Slow Tour’s English blogger.
She’s visiting Apulia and she’ll tell us about in an article or two.
“Here is where you can feel the soul of south!”
Let’s go and see how they bake the bread and make orecchiette pasta.
Good day. What can you show us today?
How to make a pizza in an open oven.
Once upon a time bread was made at home, but there was no thermostat for measuring the temperature.
So they used to bake a piece of plain white dough to get an idea of when the oven was ready
When it turned a golden colour the oven was ready for baking the bread.
The passage of time brought with it the idea of enriching this piece of plain white dough
with oil, oregano, garlic, salt and chilli pepper.
So could it be said that this is where the pizza originated from?
It’s important! Being able to say that the pizza originated from here makes it internationally important.
So let’s say it then! The pizza originated from here.

And here we are, at the convent, immediately overlooking the beautiful view of Biccari
The convent has a history that has become linked to Biccari’s youth.
The young people’s cooperative has taken part of the convent and converted it into a B&B.
Inside the convent of St. Anthony of Padua we meet Fr. Nicola.
Given its capacity, the convent has always been used as a house for novitiates.
It’s been set up to welcome parish or family groups.
From pilgrims to tourists, all are welcome!
When the doors are open and there is a willingness to welcome, people will come.
Biccari, one of Italy’s authentic hamlets.
Being an authentic hamlet means rediscovering that authenticity
that by now is one of the rarest commodities around.
A welcome of the hamlets that is typical of hamlets, where life is lived slowly, mindful of others, differently.
This is the real tourist attraction, and that’s why Italia Slow Tour is here, with the authentic hamlets.
Let’s stay in Biccari a little while longer, for an evening of pizzica music,
in a crowded square where everybody is having a good time tasting the specialities from the food stands provided by Italy’s other authentic Italian hamlets.
They’re all here, Calabria, Umbria, Abruzzo…
Music!