Salento, the heel of Italy!

The sun, the sea and the wind, they say

Apulia (or Puglia in Italian), is an awesome region to visit. Besides being a wonderful and popular maritime destination, thanks to its clear light blue waters and sunny weather, it also offers a variety of cities and landscapes to explore.

I set off to discover one specific part of this amazing region, the socalled Salento, the actual heel of Italy’s boot! My journey revolved around the southern area of Salento, the one included in the province of Lecce. Here you can really find something to please you, no matter if you are a beach lover seeking for relax or a city explorer looking for historical monuments and local food, or even a nature enthusiast who want to enjoy a beautiful landscape.

I swear, here you will find your perfect place!

My journey starts in Marina di Marittima, a very nice little town, a typical seaside resort of Southern Italy. The town centre is quite small but lovely: there’s just one supermarket, one little bakery, a couple of cafés, one butcher…and everyone seems to know each other. But the real gem of this place is the Insenatura Acquaviva, which is a cove with fresh spring waters. Locals said that during the high season in Summer this cove is packed with people, but in June, early July and September it is usually very liveable. Nearby Marina there’s the city of Castro Marina, which is called “the pearl of Salento”. Castro Marina is a much livelier and touristic town, here the nightlife is active and the seaside offers some amazing views. Worth a visit is the Grotta Zinzulusa, a very suggestive cave characterised by a variety of stalactites, stalagmites and animal fossils remains. Several local companies at the harbour  are available to rent boats, pedal boats, canoes, and to organise boat trips to the caves and other seaside resorts.

From Marina di Marittima where my accommodation for the whole journey is, I drove down to the southernmost place of Puglia: Santa Maria di Leuca, the very tip of the heel! Here you will find many sandy beaches, as Leuca is mainly a seaside resort. Some of the most popular are Felloniche, Posto Vecchio and Pescoluse. From Leuca and its surrounding depart many touristic boats that allow you to see caves and the coastline from another perspective. Not far from Leuca, there’s a place called Ciolo, especially popular for its bridge. Under this bridge, which is about 30 meters tall, there is a cove where people can swim and relax. Well, every now and then some brave (and a little crazy) people decide that is a good idea to plunge from the bridge, which, I say it again, is 30 meters high, into the water. When I was on the bridge and I looked down, I really wondered how those people manage to do it. Then a local told me that sometimes someone gets really hurt by doing it. So I do not really recommend doing it (for sure I won’t do it myself). Anyway, the view, both from the bridge and under it, is breathtaking, and the place itself is very quiet, so it really is worth a visit! Under the ponte Ciolo by Maurizio Zucchelli

Gallipoli is on the West coast of Puglia, by the Ionian sea. The town of Gallipoli is virtually divided into two: the modern part, with all the newest buildings, and the old one, which is located on a limestone island linked to the mainland by a bridge built in the 17th century. The old town is, of course, the most picturesque one, consisting of an intricate labyrinth of winding streets, beautiful churches and historic buildings.

King Ferdinand I of the Two Sicilies begun the construction of Gallipoli’s port which in the 18th century became the most successful oil production platform in the Mediterranean sea. The most fruitful trades, and those on which the whole economy of Gallipoli was based on back in time, were those of lamp oil and wine, which were exported in all Europe. Even though the oil production represents a huge part of Gallipoli’s history, not many visitors and tourists know about it. Scattered around the old town there were about 35 subterranean oil mills, which where often located under aristocratic palaces.

The lamp oil was produced using olives coming from the surrounding countryside, which were first fermented and then pressed. This process required a long time and was carried out underground because the environment ensured better conservation of the precious liquid. During the whole period the labourers virtually had to live, sleep and eat in the underground mill where they worked, which was an unhealthy, dark and smelly place. The place was so insalubrious that very often the workers fell ill and fainted. But the activity was so profitable that the influx of workers was always huge. A guide in one of this olive mills said that in some cases with the work of one month one could support a whole family for many years! When the olive mills where dismissed, they were literally buried with dirt and forgotten for a long time. Their existence was discovered a few years ago, almost by chance. Since then just 5 mills have been found, renovated and a couple of them are now open to the public. In Gallipoli you can visit the “frantoio oleario” located under the Palazzo Granafei, hidden among the narrow streets of the old town.

A narrow alley in Gallipoli by Flickr user Donato Margapoti 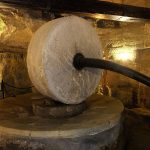 Detail of a Olive mill in Gallipoli by wikipedia user Nikater 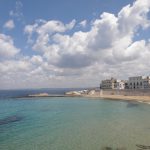 Besides that, Gallipoli’s coastline offers many beaches, such as Baia Verde, just to mention one, which are a favourite destination for tourists from all over the world, attracted by the white sand, the crystal clear water and the various events and concerts organised throughout the summer.

I’m in Otranto, once again back on the east coast, by the Adriatic sea. In Otranto you will find the easternmost place in Italy: it is Capo d’Otranto, where the lighthouse of Punta Palascìa is. According to nautical conventions from Punta Palascìa you can see the the junction point between the Adriatic sea and the Ionian sea. In 2010 the old town of Otranto has been nominated as a UNESCO Cultural Heritage Site.

I’m heading to the Ex-Cava di Bauxite, but on my way I stop for a little bit to take a look at the Aragonese Castle, the castle which named the first ever gothic novel, the Castle of Otranto by Horace Walpole! The Castle was commissioned by Alfonso of Aragon and built between 1485 and 1498; it is directly connected to the city Walls forming a whole defensive complex. 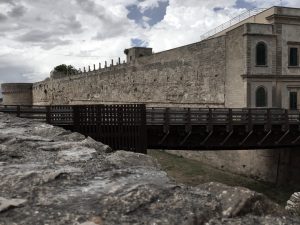 The Castle of Otranto by Maurizio Zucchelli 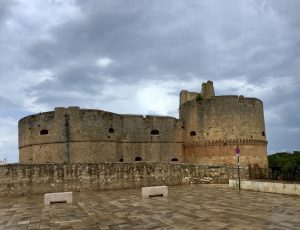 Castle of Otranto by Maurizio Zucchelli

Now, back on my way to our main destination: Otranto’s bauxite quarry! In just a few words, bauxite is the mineral from which aluminum is extracted. This quarry were discovered and put into use in the 1940s, only to be abandoned in 1976 due to the excessive cost of the extraction process. Anyway, it was an important source of livelihood for all those who have extracted the material in the years when the site remained in activity. During the excavation process a water table was found, and this resulted in the formation of a small pond, which today constitute a great part of this fascinating place.

The intense emerald green of the pond, given by residues of bauxite, beautifully contrast with the bright red of the quarry itself, creating a breathtaking view. You can walk  all around the site, and in the highest points you can also glimpse the sea in the distance, as the quarry is located near the Bay of Orte. The lunar landscape this abandoned quarry offers, with the strong colours and the surrounding desolation, is beyond imagination. You won’t really expect to find something like this in Southern Italy! When talking about Italy, one cannot really skip the food topic, right? Among other things, Salento is particularly famous for Taralli which are baked products which takes on many variations depending by the production area. Basically taralli are small ring of unleavened dough (made with flour, water or wine, oil, salt) baked in the oven. They can have many flavours, besides the classic one, such as fennel, pizza, chili pepper, red wine, veggies… and sweet versions, covered in a sugar glaze, are also available. I bought a lot of Taralli to bring back home, they taste so good, and you can find them literally everywhere in Puglia!

Another typical food is the Puccia, which is essentially a type of bread filled with… whatever you like. So simple but delicious, and you can find this everywhere in Salento too! Actually there are places called Puccerie that are specialised in this kind of dish. For a sweet breakfast or afternoon break you can have the Pasticciotto, a shortcrust pastry filled with custard, which gives its best when eaten warm freshly out of the oven. The Pasticciotto is typical of the area of Lecce, but you will find it anywhere in Salento! 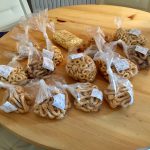 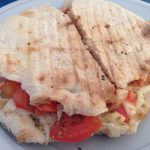 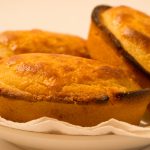