Slow itinerary by urban train, looking for some hidden places in town

My arrival in Milan was a bit late, at 9 p.m. and to tell the truth little I knew about the Milan I was to discover. I had been to Milano several times before, but whether for a concert or to visit my friend Ezgi and hang out at the Navigli and participating at her house parties for Fashion Week. Sure I had seen the Dome, the La Scala Theatre and the shopping streets downtown. I had no idea what Milano had to offer besides all that.

I arrived at Milano Garibaldi Station and I was to reach the Hotel Cervo in Piazzale Principessa Clotilde near Porta Nuova. I had never been in that area before and it was pretty dark already, but as soon as I walked out of the train station, I came across this illuminated futuristic square with a changing color fountain at the centre, surrounded by “green” skyscrapers and very modern buildings. I found out right after that it is called Piazza Gae Aulenti. The square was very lively and I met some nice people that confirmed the direction of the VisitMilano app I was still a little skeptical of, leading towards the Hotel. I took a stroll along this new age part of the city and walked across a bridge where the plan of the project was exposed: Progetto Porta Nuova, a project of urban requalification of the area of the city expanding from the Garibaldi station to Piazza Repubblica, and from Porta Nuova to Palazzo Lombardia. Due to the bg surface of the project, it took about 10 years to be built. It took me only 10 minutes on foot to reach my destination. I arrived at Porta Nuova and there I met Virginia, the video maker that was to join me during this journey. We went to get a bite nearby since there were many nice restaurants and cozy cafès to explore, and started to know each other better. I found out to my surprise that she came from Sicily, so we had a cheerful chat about her land and the beauty of her home town Catania. We didn’t stay up too late because Saturday was to be an intense day. We were to visit The Church of Certosa di Garegnano, The Collezione Branca Museum and The Sanctuary of Santa Maria alla Fontana. We had our city maps, our bike sharing passes, our two day pass for the Suburban Railways and we also downloaded the VisitMilano free app for the public transport means, the purchase of tickets and the list of attractions. So we were more than ready for the days to come! Early call: 7.30 am. Me and Virginia had a big breakfast during which we talked about that day’s itinerary. It was raining so Plan A of using the bike sharing service was off. Plan B was to get to the nearest “Passante Ferroviario” (suburban railways station) and go for it. So that’s what we did. In 5 minutes walk we got to the Garibaldi metro and passante ferroviario station and we checked which of the 13 lines got us to the Certosa di Garegnano Church, located in the North-West outskirts of Milano. We had to options: the S5 or S6 line. We used our 2 day pass, that cost only 8 euros 25 and that we could use for all the means of tranport from tram to bus, train and suburban railway. In less than 10 minutes time we got to the Certosa stop. Pretty quick that was! 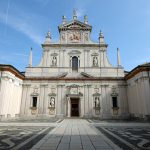 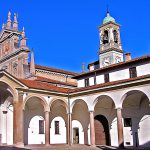 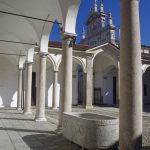 Then using the amazing VisitMilano app we got on foot to the Certosa Church in front of which we met Roberto Gariboldi, the archivist of Certosa and one of the founders of the “Amici della Certosa” volunteer association, who together with other volunteers organizes guided tours, events, art exhibitions, concerts and looks for sponsors in order to preserve the Church as it is and to make it known to both Milanese people and turists. I knew nothing about the church, except for what I had peeked online. What caught my attention was the fact that it is called “The Sistine Chapel of Milan” due to the breathtaking affrescos. So I couldn’t wait to see that. Mr Roberto was very kind to guide us throughout the entire place, made of several chapels (since the certosini friars loved to meditate in solitude), different internal passages, amazing oil paintings and affrescos. I found out that the church had been erected in 1349 by Giovanni Visconti, an important figure for Garegnano and for Milan, because the archibishop and Lord of Milan. It was build 4 km outside the city walls to allow the monks complete isolation and meditation space. It is said that few years after its foundation, it hosted the one and only Petrarca, attracted by sense of peace and serenity the church offered. Many paintors participated at the decoration of the church, the most important being: Bernardo Zenale, Daniele Crespi and Simone Peterzano, maestro of the famous Caravaggio between 1500 and 1600, the main years of prosperity of the church.

Once you enter the church you become somehow hypnotized by the peaceful atmosphere and by the beauty of the paintings. I could then understand the comparison with the Sistine Chapel in Rome. The ceilings were all decorated with vivid colors portraying different episodes from Christianity and the various saints. The altar was beautifully disposed still with the decorations from the Via Crucis, exposing the various silver statues of the saints to the visitors. The external part of the church when still occupied by the monks was way bigger, including 4 cloisters and yards, each of them having a different role. Now the big cloister doesn’t exist anymore, but Mr Roberto took us through the different “secret” passages in order to show us the remaining cloisters and yards. The certosini monks lived in isolation and medidated most of the day, while the “working” monks were busy with the different jobs meant to provide for the whole place and the people living in it. I learnt that they had access to separate passages due to the internal hierarchy of the church. For one instant while walking through all those secret doors and paths I felt like I had gone back in time and a sense of mystery and solemnity pervaded my spirit. I felt priviledged to have had access to that secret internal and external labyrinth, and I couldn’t thank Mr. Roberto enough for his hospitality, his availability, his story telling and most of all for his passion and devotion to this beautiful place that started 40 years ago and still continues today. Grazie mille!

Next stop: Collezione Branca Museum (to be continued…)