The grand 14th century Certosa is the ancient and current religious complex of the secluded and silent Carthusian monks. The astonishing monastery and church are located between Milan and Pavia in a small town – only about 5,000 inhabitants – in the midst of the lush rice paddies that produce the famed and exclusively Italian Arborio rice. A visit to the most beautiful Certosa must be on your northern Italy agenda! 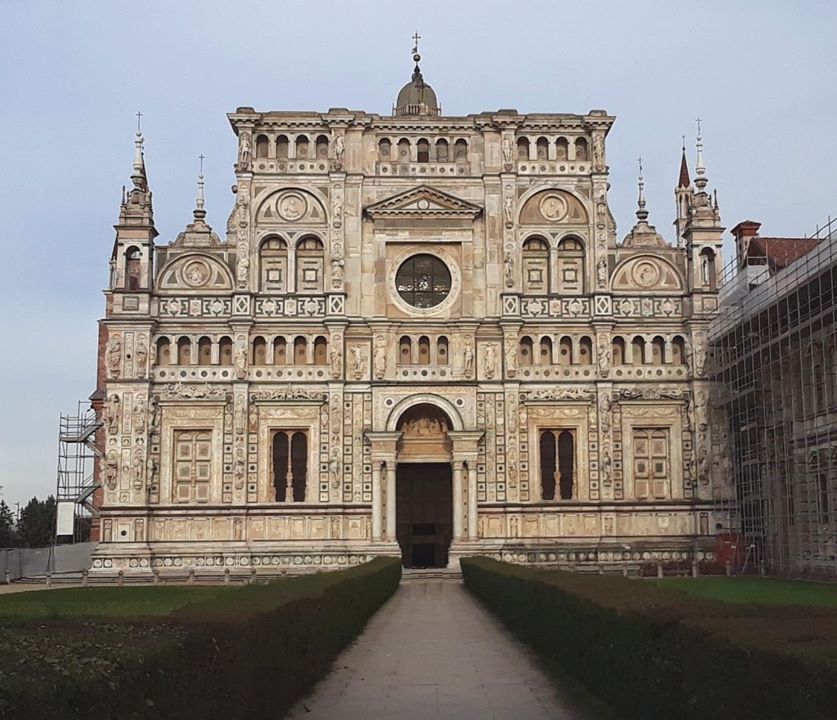 The beauty of the Certosa di Pavia lies, too, in the lush fields surrounding and enclosed by the walls of the cloister, and the tranquility of the confines of the monastery, and not just in the splendor of the buildings and the artwork. If the frescoed Renaissance gate that impedes access yet invites one in whispers the language of wealth, the carved and statued marble façade of the Basilica Santa Maria delle Grazie shouts it. Surely the benefactor lord of Milan – Gian Galeazzo Visconti – sought to purchase the good wishes of his deity by funding the church and complex, and surely he made a very grand effort. 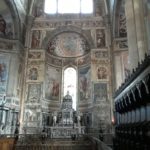 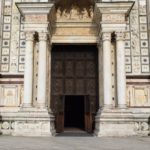 Certosa di Pavia, Detail of the façade of the entry door

If the long walk around the walls one must make to reach the church from the small train station does not steal your breath a first view of the church through the iron gates will. This is a side trip I recommend for all the pleasures possible – that begin when of the urban landscape fades to south Milan’s agricultural area – and erupt in the first sight of the brilliant face of the Chiesa. My visit was on a sunny day in the grey landscape of winter. But I minded the lack of spring colors less than the crowds a true spring or summer day would bring. I liked the solitude of being one of only a few. I really enjoyed the spaciousness and the silence. The day was unrushed and calming. 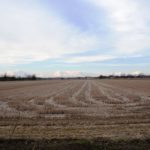 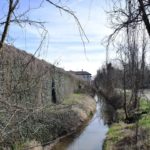 Naviglio Pavese, The canal that begins in Milan and flows all the way to Pavia. 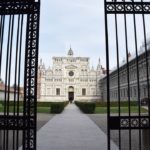 First view from the entry gates

It is easy to get here from Milan without a car. One takes Urban Train Line S13 out of any of three Metro Stations – Garibaldi (M2/M5), Reppublica (M3), or Porta Venezia (M1). The Urban Line ticket is about 6 Euro and trains run all day. The small town of Certosa di Pavia is eight stops away from the Garibaldi station, seven stops from the Reppublica Station and six stops from the Porta Venezia station. Be sure to sit in the middle of the train and be vigilant about being near a door. The train platform is short and the stop is brief so you need to be sure to be able to exit quickly. On leaving the Certosa di Pavia train station one can see the church – it is quite close and the walk is well marked. There is no possibility of getting lost since all one does is walk around the wall that surrounds the monastery. 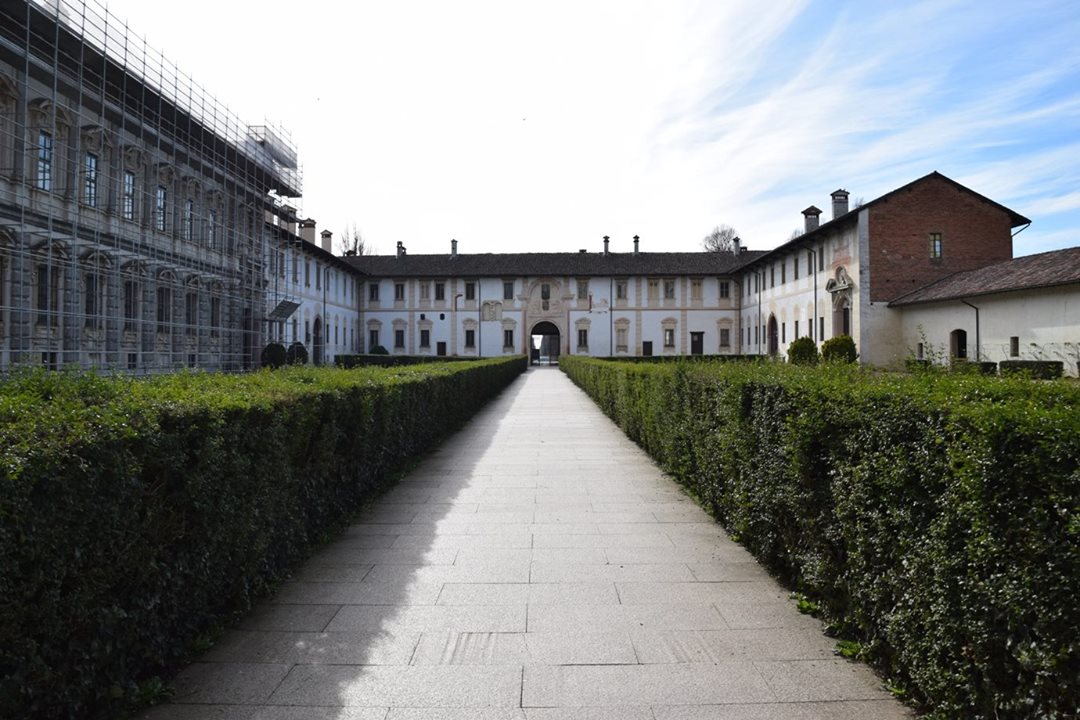 Certosa di Pavia, View of the courtyard and entrance from the steps of the church

The entrance to the church and large cloister is free as is the guided tour given by a monk. One must pay an entrance fee for the museum. There are free public bathrooms in the courtyard, clean and new. There is a gift shop with many things to buy: liquors, local honey, fruit jams, religious artifacts, and herbal teas. If buying the locally crafted herbal tea take care to translate the ‘tea-intent’. I bought a tea with anise – which I like for its licorice flavor – but I got a remedy for constipation! The museum – housed in the ducal palace – is worth a visit. Plan well though because the monastery and museum are only open five hours a day – 9:00-11:30 and then 2:30-5:00 (closed on Monday). There is little else in the town save a small bar and restaurant, and the Galbani plant. This is not a heritage site where one can linger. 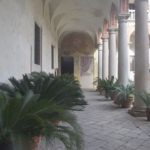 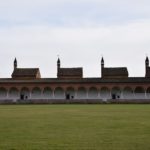 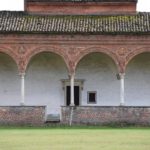 Certosa di Pavia, the Clasura – Cloister – detail – the door to one of the houses for the monks

The architecture of the church is grand and the twelve small, interior chapels are rich with frescoes. But the church is cold and dark, the chapels are fenced, and the interior artwork cannot be well appreciated without light or access. No photos are allowed – something that almost kept me from coming. I was unable to take pictures of the beautiful Madonna’s – the frescoes – the ornate ceilings. I stole a few shots with my phone – terrible – and when the watchers were busy closing the church I took a few more with my camera in the back of the church where my shutter was less likely to be heard. But even though I mourn the loss of personal photos of the Incoronazione della Vergine by Ambrogio da Fassano – the Bergonone – that covered the interior of the cupola of the right side transept I still am glad I came here. It was a different kind of day for me because I could not take photos of the artwork. I did steal one photo of the Madonna di Garofano by Bernardo Luini. The quality is poor but I own it so I am happy. 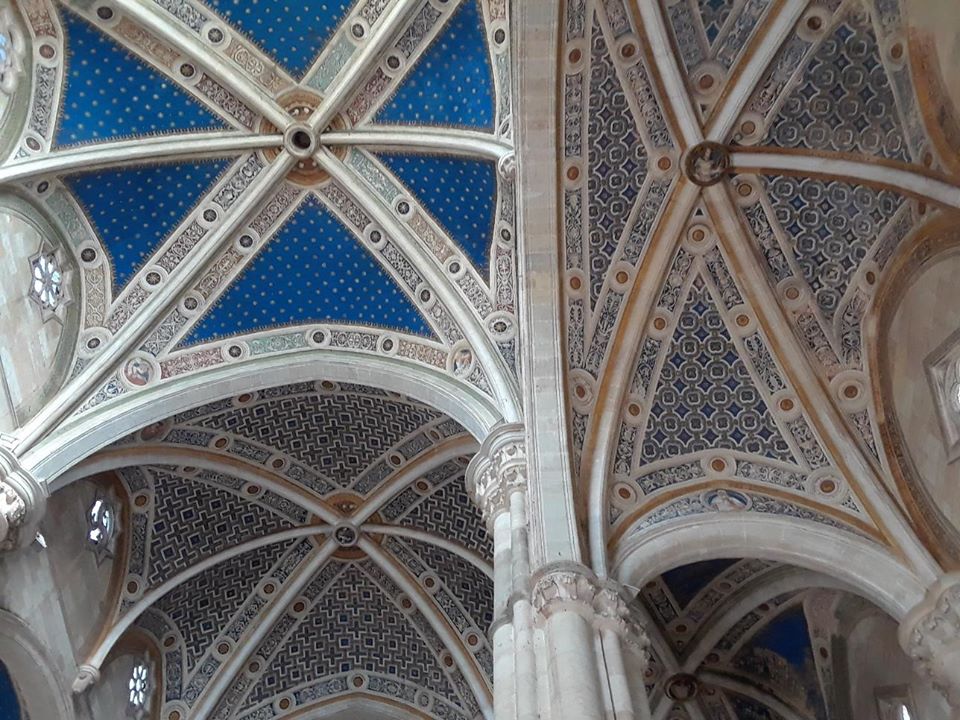 And I managed a much better photo of the curious 1490 wall painting by Jacopino De Mottis in the back of the church called “Converso Certosino Affacciato” – Carthusian Lay Brother Overlooking. This monk in a window looked real to me for a scant second when I caught a glimpse of him looking down from what looked to be an actual shuttered window in the upper wall of the church. The painting is perhaps whimsical – if one considers the lack of religious purpose of such an image in an otherwise intentional sacred landscape – or foreboding – if the unrelenting watchfulness of the lay brothers in whose care rested the well-being of the cloistered  silent hermit monks and the entire religious complex is imagined. 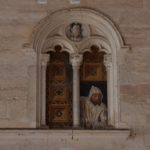 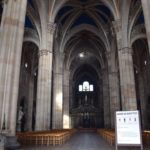 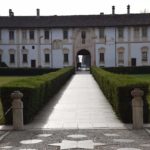 Built in the late 1300’s by the duke of Milan – Gian Galeazzo Visconti – the Certosa took fifty years to complete. By then the great lord was dead and buried in an elaborate marble tomb in the transept with the Bergognone Madonna. The new patrons who completed the work, are close by in the left side transept bodies peaceful and prone on the cenotaph carved with their sleeping marble likenesses – the bones of Ludovico Maria Sforza in France where he died and his much younger wife – Beatrice d’Este – in Milan. I leave you with a few more photos of the interior of the church taken surreptitiously with my phone when no one was looking and a few more photos of the complex. I hope you are inspired to visit the most beautiful monastery that I have ever seen. I urge you to take the tour available and visit the museum and herb and souvenir shop. You are sure to be astonished! 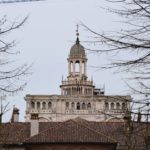 A favorite view from beyond the entrance 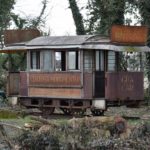 An old railway car – just outside the Certosa 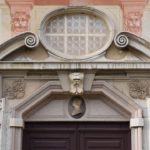 Pretty door in the courtyard. This goes into the Ducal palace