A crossroads between urban and rural Milan

From Porta Genova we took the suburban railway (Passante Ferroviario) towards Rogoredo stop and in less than 10 minutes we got there. We had few options to get to our destination, Nocetum: by subway (the yellow one) one stop towards Comasina, at Porto di Mare stop, or walk few minutes. Maria Vittoria Gatti came to pick us up and gave us a warm welcome. I had read a bit about the centre and since I am a teacher, I was positively surprised by the fact that they organize didactic activities for schools, where children can explore nature and get in contact with the rural lifestyle. We finally got there and what stroke me was that we seemed to have reached the end of the urban side of Milan (south-est) and we could see how from that spot the rural area dominated the landscape: a true crossroads between urban and rural Milan, with on the left tall apartment blocks and urban centres, and on the right a long bike trail sided by green fields. 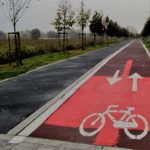 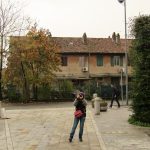 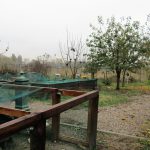 This idea of crossroad was reflected also at the entrance at the Nocetum centre by a modern art piece that symbolizes the “gates” to the centre and that from the outside look like green plants, but on the inside are supported by a metallic construction. This piece wants to represent the fusion between urban and rural life, in a quite poetic way I’d say. In front of the centre we were welcomed by other 2 people: Gilberto Sbaraini (president of the association La Strada) and Umberto Zandrini (president of Consorzio Sir), who took us across the street from the Nocetum centre to visit a new centre which was still work in progress, where many different associations are co-working in order to revive the place and use the structure for social purposes of integration and interaction. The place looked still a bit abandoned and we discovered that it had till not long before been in the hands of some trafficants, and only recently had they started to clean it up. There was already a bike lab all set up and ready to be used by whoever needed it. A lot of work still has to be done, but all the devotion and passion that they seemed to be giving to requalify that area of Milan, left me no doubt on the success it will have in the near future. The idea was that of replicated the success and role of Nocetum Centre, which is a good reason to be proud. 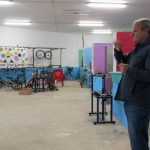 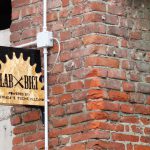 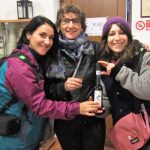 After having said goodbye to Gilberto and Umberto, we met Marianna Faraci, who guided us through the Nocetum Centre, a jewel for the city and that area of Milan, that shines thanks to many working hands and passionate hearts and helps a lot of people in need: single mothers with children, immigrants, socially marginalized people and schools. Its name apparentely comes from the existence of an ancient woods made of walnut trees, and in its garden we can still admire a big bold one that seems to be situated in the middle of the centre. 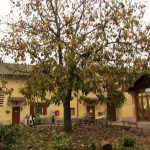 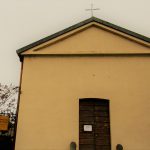 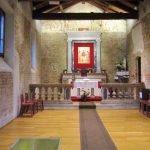 Right near the entrance of the Centre, to our right, there was a tiny tiny church, and we were soon welcomed inside. It was different from any of the ther church we had visited, because smaller, cozier and warmer. I knew it had some sort of historical importance as soon as I noticed the affrescos on the chapel wall facing us, which seemed pretty ancient. And I was right. Marianna told us how it all started from that tiny little church, that thanks to Suor Ancilla was revived and reused as a chapel open to all religions and believers. What is amazing is that thanks to archelogical excavations, in 2013, it was found out that the Chrch is a lot older than predicted. Ancient tombs were discovered underneath the pavement, that date back to the first Medieval times. Thanks to the discovery, they were able to have also antropological analysis and to find more about the community that lived there, and the role of the church. And the findings don’t stop here: coins dating back to the 350 A.C revealed even more ancient contact and presence in the same place.So, initially a religious place, due to the presence of the Saint Giacomo and Filippo a Nosedo Church, in years Nocetum has become a reference point for different social and humanitarian purposes for many people and communities and has expanded in the area near the church, hosting several building that serve different purposes: a garden with km zero vegetables and fruit, a bee hive, and domestic animals, a shop where one can buy honey, walnut liquor, and all sorts of products made there, the main house, the house meant for hosting mothers with chidren in need, and a kitchen and restaurant. 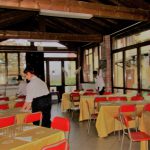 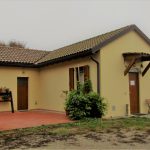 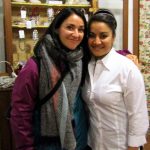 I got the chance to meet a young woman who had been living there for some time and thanks to the help she got, she is now able to raise her child and make a living. She works both in the kitchen and at the catering service, and manages the km zero shop. She became very emotional when remembering about the time she first came at the centre and told us how grateful she was. She looked now like a happy and serene woman, self confident and determined. What impressed me is how people belonging to different nationalities and religion live happily together and work side by side and how they transform that into a value despite the initial differences. I was truly impressed by the efforts and kindness of all the people I met there and I felt inspired and pushed to try to do something similar in my own existence. It is results like these that make us look up to these kind of initiatives and cherish them dearly.

We said goodbye to Marianna and Maria Vittoria took us to the Chiaravalle Abbey because we were running late and it was getting dark. The place is easily reachable by the 77 bus in few minutes or by the yellow subway line. The Abbey is one of the first examples of gothic architecture in Europe, and it dates back to the 1134. Its origin is connected to the arrival of a group of French monks from the Citeaux Abbey. Surrounded by green spaces, when built it soon became the heart of the town, both social and cultural wise. Its elegant style is linked to the Cistercian Monks presence, who still today live and dedicate their lives to preserving the place.

The inside is beautifully decorated with amazing paintings and affrescos, dating back to the 1500’s and 1600’s. What striked me the most was this stairway on the right side of the church, at the end of which there was a big affresco: “Madonna della buona notte” (The Goodnight Virgin Mary) painted by Bernardino Luini (1512). Before the monks went upstairs to the bedrooms to sleep, they would say a prayer in front of the Affresco, and it would also be the first thing they would see in the morning, coming down in the church. We went to visit also the external part of the church, and looking up I was striked by the imposing image of a beautiful tall tower: also called by the Milanese people the Tower of the Ciribiciaccola (meaning stork). Storks were an important symbol for the Cistercian Monks, in fact you see this in different places on the building. 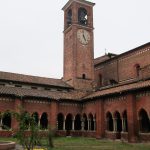 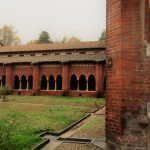 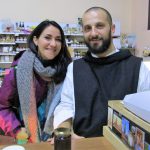 Roxana with the young monk of Chiaravalle

It was getting late, but we had to stop for a souvenir and visited the monks shop, where they sell all their handmade km zero products. I had a bit of a cough and I bought this particular honey called “Balsamel” made of propolis and tons of herbs and essential oils that I now call the “Magic honey” because it healed me in 2 days time. We also got a chance to meet a monk who told us his story and why he choose the monk life and I was really impressed by his serenity and happiness. You would think that a life of reclusion doesn’t offer you much, but I was surprised to know different.  We said goodbye to the monk and the beautiful Abbey of Chiaravalle, and headed towards the hotel to get our bags and we had to hurry because we soon had a train to catch and get back home.

Goodbye Milan you always surprise me with your hidden treasures! And see you soon 🙂