After having been hypnotized by the “Collezione Branca” Museum and its wow effect, we headed on foot towards a well known sanctuary, at about 1 km distance from Via Resegone: Santa Maria alla Fontana. We were never let down by the great VisitMilano app, so we reached our destination in no time. I was immediately curious about the name of the Sanctuary and I kind of sensed that the word Fountain had a certain significance to it. All I had to do was ask our lovely host and guide, Maura Ciccardi who was more than prepared on the topic. We started the visit from the outside, in this curious shaped yard. I immediately found out that the place we were standing on was a naturally carved hollow, and that it was paramount to the Sanctuary for many many years. It used to be filled with water that was coming from a natural spring. When the church was built, in 1500, the place it was built on was far from the city and surrounded by a rural landscape, with woods, fountains and no inhabitant. Starting from the 1520’s the rich Milanese families were known to have travelled to the Sanctuary’s water spring when ill, seeking for cure. Now in the hollow there is no water, due to the many fires and changes coming after the wars and conflicts, but there is a fountain with many taps inside the church where people still come and drink in search for a cure. I guess the magic lies within each person’s belief and no doubt if you truly believe in something, it can come true. 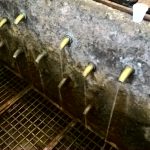 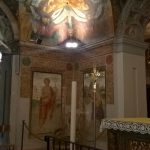 Frescos on the walls 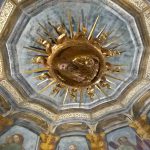 There are some legends about who designed the project of the sancturay, and the mystery revolves around 4 famous people: Bramantino, Cristoforo Solari, Amadeo or the one and only Leonardo Da Vinci. The proofs make us believe that the architect was one of the latter two. Maura gave us some curious insights about the different evidence. What captured my attention were the beautifully painted affrescos from the ceilings to the sides of the church, its round shape and it’s illuminated spaces due to the glass made doors that surround the church. 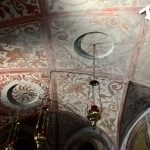 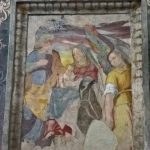 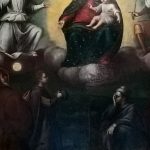 There is evidence of the antique origin of this sacred place even inside the sanctuary: the affrescos at every corner at the entrance space are original and date back to the 1500’s and portray different scenes from the Nativity. The ceiling is original and it is full of symbolism. Even its red color makes us think of a “hospital” because the predominant color of such a place in that time. Maura then took us into another space, that hosted the superior church and altar and that was absolutely amazing. The altar is original from the 1500’s and the paintings and ceiling affrescos were absolutely breath taking. The floor in front of the altar is original too, made of different types of marble and with colourful patterns.  The church gave me a sense of calm and peace of mind that I just had to stop for a second and enjoy that moment of quiet. We said goodbye to Maura and thanked her for her great help and continued our journey.

The night was young and we were excited to know more about the “Isola” (The island neighborhood) which seems to be turning into a very hip place for the Milanese nightlife: an alternative to the Navigli. After having had some rest, we were ready to explore the Isola by night and we met with my friend Ezgi who lives in Milan and also recommeded the area. We headed towards Frida, a known hip place for aperitivos and nightlife. Despite the rain, there were many people out on the streets and inside various pubs and clubs. A lot of live music coming from the different bars, people having good laughs, having quick bites or enjoying a cocktail. We opted for the cocktails first at Frida, but since it was Saturday the place was packed, so we decided to change place and have a quick bite and some wine. The night was still young, but we had a long day ahead of us the following day: Villa Necchi, Nocetum and Chiaravalle Abbey. So we headed towards the hotel and had a goodnight sleep, with the sound of music still playing in our years…