The colours of Trani

A white and rose city, built on its harbour

We visited Trani to attend the literary Festival “I Dialoghi di Trani” (that is Trani’s speeches). We arrived at Bari airport and we drove northern with a rental car. Bari and Trani are 40 km far from each other, the two cities fought for almost 250 years because of the title as “Capital city” of the region Puglia.

We have been pleasantly surprised by Trani. Don’t stop at the suburbs, full of awful buildings from the 60s, 70s and 80s like everywhere else in Italy. Go straight to the harbour, with its Cathedral and the great Castle in the background, and be prepared to be amazed!

The harbour is on the mouth of an ancient river that doesn’t exist any more. The city everyday life is here, with all the pubs and restaurants. Even if there are too many cars, the view is amazing. The harbour is small, but “genuine”, there are some pleasure crafts, but mostly fishing boats.

The name Trani could come from the fishing procedure “traina“, or from mythological Tirreno, Diomede’s son, who is supposed to be the founder of the city. Anyway the most impressive thing about Trani is its white-rose colour, due to Trani Stone, a peculiar kind of tuff coming from local mines. 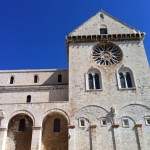 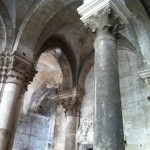 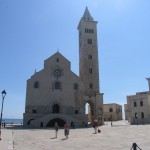 The Cathedral is a real masterpiece: its cream colour made of pure white stone gets along with the colour of clouds, in contrast to the blue sky. We climbed the majestic staircase, but the main entrance was closed. We hesitated in front of the secondary entrance, but a man, Don Giovanni Masciullo, came out and said us: “Would you do a tour of the Cathedral? Come in! The Dean in person will be your guide, that’s me!”.

This Cathedral is a great example of Romanesque architecture, we visited the crypt, the apse, and then the whole church. Don Masciullo told us the story of San Nicola Pellegrino (don’t mistake him with San Nicola di Bari, who actually was Santa Claus’s dad, and Turkish): San Nicola Pellegrino arrived at Trani, perhaps returning from a Crusade, in 1099 and here he died. The Cathedral is dedicated to him, who was even declared Saint.

By the time of Crusades, the harbour of Trani was a very important commercial intersection. Here there was a huge Jewish Community, and there were no less then four synagogues. Trani was considered as one of the Maritime Republics, many people from Florence and Venice used to live here. In 1063 a man called Pietro da Trani wrote here the maritime law code “Statuti Marittimi”, which is base of the present International Maritime Law. 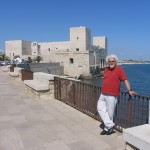 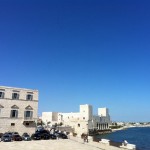 The Castle of Trani 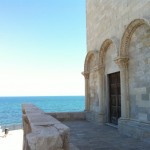 Climb up on the top of the bell tower to enjoy the best view of the city and the sea. On top we realized we were very close to the Castle! On our road to the castle, we stopped at the church of the Templars and we had lunch at the Locanda Psevenghi, in the area of the harbour.

The Castle is beautiful and well restored, location of several literary events like the famous “Dialoghi di Trani”, about literature and music. The favourite son of Federico II, Manfredi, made the Castle built in 1233. Puglia is a lively Italian region,with a strong relationship with the East and the whole Mediterranean, thanks to Federico II.