A little village in the mountains of Molise

Even for Italians, Molise is a bit of a mystery, not many people come to visit it.  Last weekend we were in Castel del Giudice, in the province of Isernia, in Molise, for a special event organized by Legambiente about the municipality that won the Angelo Vassalo prize for practicing good politics. They achieved the important goal of developing their area in a synergic and cooperative way, creating jobs and services for the community.

On Friday afternoon we left Rome and we arrived in the area after travelling by car through the mountains for some hours. The village of Castel del Giudice is located on the top of a mountain. The major and the citizens welcomed us on arrival at the town hall. They explained us that they are a small community, with about 200 inhabitants, but with big plans! 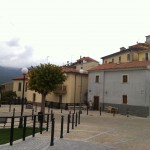 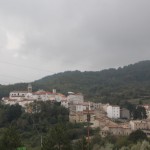 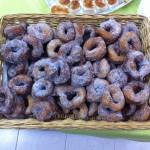 First we were showed the residential care home, a community project that successfully turned an old elementary school into a house and medical facility for the elderly. As a welcome drink and a bite, they introduced us to the locally grown apples. We drank the organic apple juice, which was very tasty and sweet, together with all kinds of delicious treats made with apples: sheep cheese with apple marmalade on top, fried donuts called Ciambelline with pieces of apple, and a focaccia with apple on top.

Next thing on our agenda was the visit to the apple orchards, located on the mountains around the town. As it happens, the apples were ready for the harvest and they handed us some bags. Of course, we could not help it, we had to try some of these organic apples just fresh from the trees. The local company Melise, a name that combines the Italian word Mela, apple, with the name of the region, owns the apple orchards. One of the main objectives of the company is to create jobs for the community of Castel del Giudice. They explained to us that the day after they would collect the other apples, which would be transformed into apple products. After our harvest, we visited the storages of Melise, where we could do our organic shopping once again. Next to Melise is the company D’Andrea, which produces high precision machine tool accessories, where many young people of the town work. 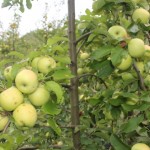 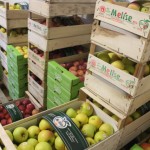 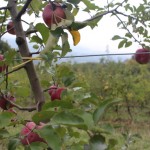 The following stop was Borgo Tufi, a small village with houses made out of stones (tuff). It is an albergo diffuso, a hotel off the beaten track run by locals. The community is restoring all the houses that originally were stables. Once restored, the houses and the small streets will serve as a hotel. Besides the houses being restored in the old style, there is certainly no lack of luxury and comfort. The hotel has even a spa. We can imagine that it would be great to enjoy the spa after skiing nearby in winter, yes you read it good, it is also possible to ski in this area.

For dinner, we enjoyed several local dishes accompanied with Montepulciano grape wine, at the Vecchio Mulino restaurant. We had Pallotte, little meat balls made of egg and pecorino cheese, a little hamburger made of lamb, which is meat that is typically eaten in this area, but not on a hamburger. We had lasagna made of the local pecorino with of course apples from Melise and polenta with walnuts, the first time we saw polenta on the menu in the south of Italy, as it is typically from the north. We also enjoyed pork neck with a glace made of apples. As a dessert, we got two things that even locals couldn’t recognize, but that tasted great: one dessert made of rice with cinnamon and apple, and the other was a drink that had egg and saffron in it. 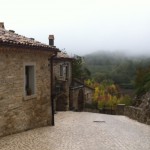 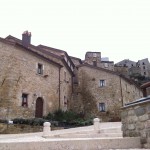 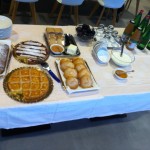 We slept in Borgo Tufi and the next day for breakfast, we had, of course, apple juice and homemade apple cakes. From the room, we had a nice view and could see the surrounding mountains, with a layer of fog hanging over it. That day we would make a tour of the area and visit some local artisanal stores and museums with a girl from Legambiente Molise. We would have loved to make a walk through the forest and mountains as well, but sadly enough the weather did not permit us to do that.

Our first stop was the town of Pescopennataro, the neighbor of Castel del Guidice, just some hills away. Normally we would have had a beautiful view over the area, seeing the surrounding mountains, but the weather decided that everything was covered by thick fog. First stop on our trip was the local stone museum. They have a collection of prehistoric stones found at local sites and also more recent stonemasonry in the area. There were pictures showing the fountains and ornaments on houses, which are typical in the area of Molise. While walking through the town we also stopped at a local artisanal workshop, where a brother and sister make ceramic art objects like Pinocchio dolls, turtles and little devils. 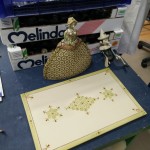 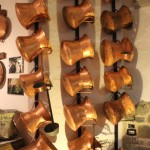 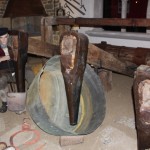 While the weather started to get worse, we arrived at our next stop in Agnone, the copper museum and workshop La Ramera. It is one of the last places where copper products are still hand made.  The owner explained to us how they used to make copper products with the power of water to run the tools. It is interesting to see how well developed humanity already was hundreds of years ago. It is a family company as the owner showed us a lot of copper items that his father made years ago, even an plate created for Pope Paulus II. In the area, people used to use copper cans in order to get water from the river, our English-speaking guide told us he remembered that his mother used to have one of them.

Before leaving, we enjoyed a big lunch at Borgo Tufi, which was part of the Legambiente meeting about the development and restoration of old villages in Italy, like Borgo Tufi. After the morning tour, we were quite hungry. We had mini pizzette as starter. After that, we got local salumi (cut meat) and cheeses, with some vegetables fried in dough accompanied by fresh lemon cream.  Next, we got a dish of gnocchi with sliced white truffle: a very exclusive product that you can only find in some places worldwide, and one of these regions is Molise. As main course, we got potatoes grilled with beef.

It was time to return back home, a pity the weather was not better at our stay because it would be beautiful to walk around and see the mountains. In summer it is also possible to go rafting.