A legend about a sad little princess, a special place that impressed Goethe

Slow Tour through Palladian Villas of Veneto: we are at Villa Valmarana ai Nani. As the story goes, the daughter of the noble owner of this villa suffered from dwarfism and her parents decided to surround her only with gnomes, to not make her feel different. One fine day, a beautiful prince arrived at the Villa: she fell in love with him, but he mocked her. Overcome by despair, she came up to the highest tower and committed suicide. All her gnomes, in pain, remained petrified. That’s why in the garden and on the surrounding wall there are a lot of gnomes statues that are still watching the girl sleeping.

Actually, Villa Valmarana (near Vicenza) dates back to the end of the 17th  century and since 1720 up to the present day has always been in possession of the Valmarana family. Giustino Valmarana indeed in 1736 wanted the villa to be restored by Muttoni, the same famous architect who restored Villa Trissino.

Today I have visited Villa Valmarana that Tiepolo has decorated, giving free course to all his virtues and defects. He didn’t succeed in realizing the sublime style like the natural one, but in this aspect there are splendid things: as a decorator, broadly eaking, he is full of happiness and cleverness.

This is how Goethe described the villa in its “Italian Journey” in 1786. What most impressed me about the frescoes by Tiepolo is the magnificent representation of the sacrifice of Iphigenia and all the other paintings about mythological theme (the Iliad’s Room, the Eneid’s Room…). The homeowners who welcome people to the Villa come from a three centuries old noble family. On the other hand, they are modern and practical touristic entrepreneurs who work to preserve such an invaluable artistic heritage. The tour of this Villa is really a fascinating experience. 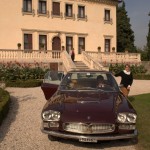 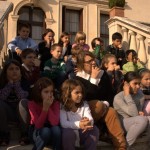 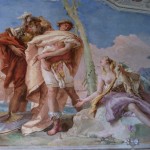 Tiepolo must be pleased!
Villa Valmarano may be less monumental than other Palladian villas,
but its walls have an extraordinary richness:
Tiepolo’s frescoes.

Tiepolo frescoed the villa with images inspired by five epic poems:
The Iliad, The Odyssey, The Aeneid, Jerusalem Delivered and The Raging Roland.
They take their cues from stories of love and war,
where women always come to a sticky end.

Don’t you think that’s lovely?
It’s almost like being in a 3D movie.

What’s the first thing you notice on this wall?
The knife!
The knife that is about to wound a girl’s bosom.
She is Iphigenia, he is the soothsayer.
Iphigenia’s father hides his face, because he wants to go to war against Troy,
but the wind stops blowing and the ships aren’t moving.
The soothsayer is asked to explain the reason for this prolonged stillness.
It would appear that Diana, the goddess of the hunt, is furious with Agamemnon –
because he killed a stag that was sacred to her.
To calm Diana’s rage, a fawn is brought in place of Iphigenia.
Sails and flags begin to flutter.
The goddess makes the wind return and it is possible to depart.
… Now isn’t that better than Harry Potter?

I wonder what story another room will tell.
It’s Iliad, the tale of a war.
The Trojan War.
Agamemnon and Achilles argue over a slave girl – Briseis.
She was Achilles’ slave.
But Agamemnon wanted here too.
The goddess of war intervened to stop them.
In the end Briseis is handed over to Agamemnon.
And Achilles runs to his mother crying.
His mother is in the water because she is a goddess of water.
And she goes and asks Zeus for help.

Another story is The Aeneid.
We see the arrival of Aeneas in Carthage.
Then him abandoning his love, Dido, to go and found Rome.
Broken-hearted, Dido kills herself.
The history of epic literature is made up of tragedies and wars,
where women always come to a bad end!
Whereas men have always destroyed everything throughout the ages.

This is Jerusalem Delivered by Tasso.
Yet another love story with a sad ending.
There is a witch who kidnaps the beautiful blond soldier with whom she is in love.
But other soldiers turn up to shatter her dream of love.
“What are you doing here? We have to go to war!”
She desperately holds out her hand to regain her love,
but she is abandoned.

To sum up: make love, not war!
Put some flowers in your guns!
If people are busy making love,
they may just make less wars…
and perhaps more children. A lot more fun!