Born as a farm in the countryside, it is the first Palladian Villa

Villa Emo at Fanzolo (a village near Bassano, Treviso and Castelfranco Veneto) is a UNESCO World Heritage Site. It is one of the most famous work by Andrea Palladio, who widely talks about it in his masterpiece “The Four Books on Architecture”. Villa Emo is also the most symbolic between Venetian Villas, because of its history and structure: it is at the same time both a noble palace and a farm.

By the 16th century, the nobleman Leonardo Emo from Venice decided to invest in land and bought a big farm. He was a capable venetian entrepreneur, cultured and determined. He decided to reclaim the area, innovate the farming, rationalize the work, build some mills. His innovative irrigation system and the excavation of new canals are still working today.

He has been the first who introduced the corn-growing to make flour to feed people not just animals. You can say that mr Emo is the inventor of… polenta! Polenta is a dish symbol of this Italian region, Veneto, which in history fed so many people. It is so important that Venetian people use to be known as “Polentoni” (that is made of Polenta).

But there’s something mysterious about this story: where did the corncob that Emo grew come from? The corn growing in this farm looks quite strange still today, it is paler than the normal one. What if this actually was Turkish-corn and not American-corn? By the way I’ve taken some samples to grow in my garden.

Leonardo Emo started with farming, then he decided to have a house-villa built by Palladio, the archi-star of the time. Villa Emo is a temple of the land: in the middle of the building lays the farmyard, a staircase brings to the upper side of the house,  then there are two other buildings, the Barchesse and Torri Colombare, used for farming. The whole structure is regulated by a regular perspective that follows the roman system of organization. The interior is wonderful, frescoed by Zelotti. 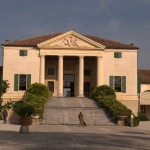 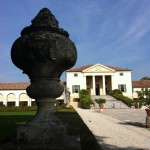 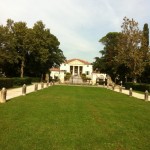 Slow Tour through the Venetian Villas!
I have arrived at Villa Emo!
What a wonderful park.
There are lots of hedges cut in a certain way, that’s the art of topiary!
It also seems that there is one gardener who does just this.
But he’s a bit of a strange sort
and it’s not easy to get close to him.
Hello!
These aren’t hedges, they’re small walls!
It’s an Italian-style garden with hedges.
It’s not easy making them grow like this!
And there are so many.
What do you do to keep them like this?
Do you want to have a go?
There’s always a first time, but I don’t want to mess up your work –
as has already happened with some sheep.
Lovely, thank you!
That’s amazing! It’s not easy
because there are kilometres of small walls made out of hedges.
The villa is extraordinary – truly Palladian.
Perhaps it’s Palladio’s most successful villa.
The most balanced, a symbol of Palladio.
The frescos, that date from 1540, are by Giovanni Battista Zelotti.
A farming villa where Venice’s nobility came to their house in the country.
Their country villa in the hinterland.
Creating fabulous works.
Information is available here and there
about the period of history and what took place in terms of farming.
Zelotti, an apprentice of Veronesi, painted with a great deal of irony.
Cornucopias and garlands, not of flowers, but of garlic, cauliflower and cabbage.
The presence of maize was highly significant!
Maize was brought here from Turkey, after it had arrived from America.
It seems that the Emo family was among the first to introduce maize to this place.
Mixing maize and water lifted the local population out of the crisis at that time.
They invented polenta (a porridge type mixture of maize and water)!