A journey through “i borghi del gusto”, amazing villages in the mountains near Pistoia.

At the end of November I went to Tuscany to see some wonderful medieval villages near Pistoia. These villages are full of history and they are magical places. I spent three days there and visited so many places.

The first day I went to Serravalle Pistoiese. It was a village used for defense, the city walls were destroyed at the beginning of the 1900s. I went up the tower and I had a really amazing view. From the tower you can see the higher part of the village and the Barbarossa tower, it is the most ancient tower. There is a myth in which Ludovico saved the village. After the lucchesi took Pistoia they stopped in Serravalle to siege it. There they were scared by the view of the saint with a sword, at the top of the tower, surrounded by light. From that moment on 19th August the celebration of the Saint takes place involving all the citizens. The days before the 19th of August there is a palio of archers in honor of the mercenary archers from Bologna who helped the Serravalle citizens to withstand the siege. It is a wonderful small village. 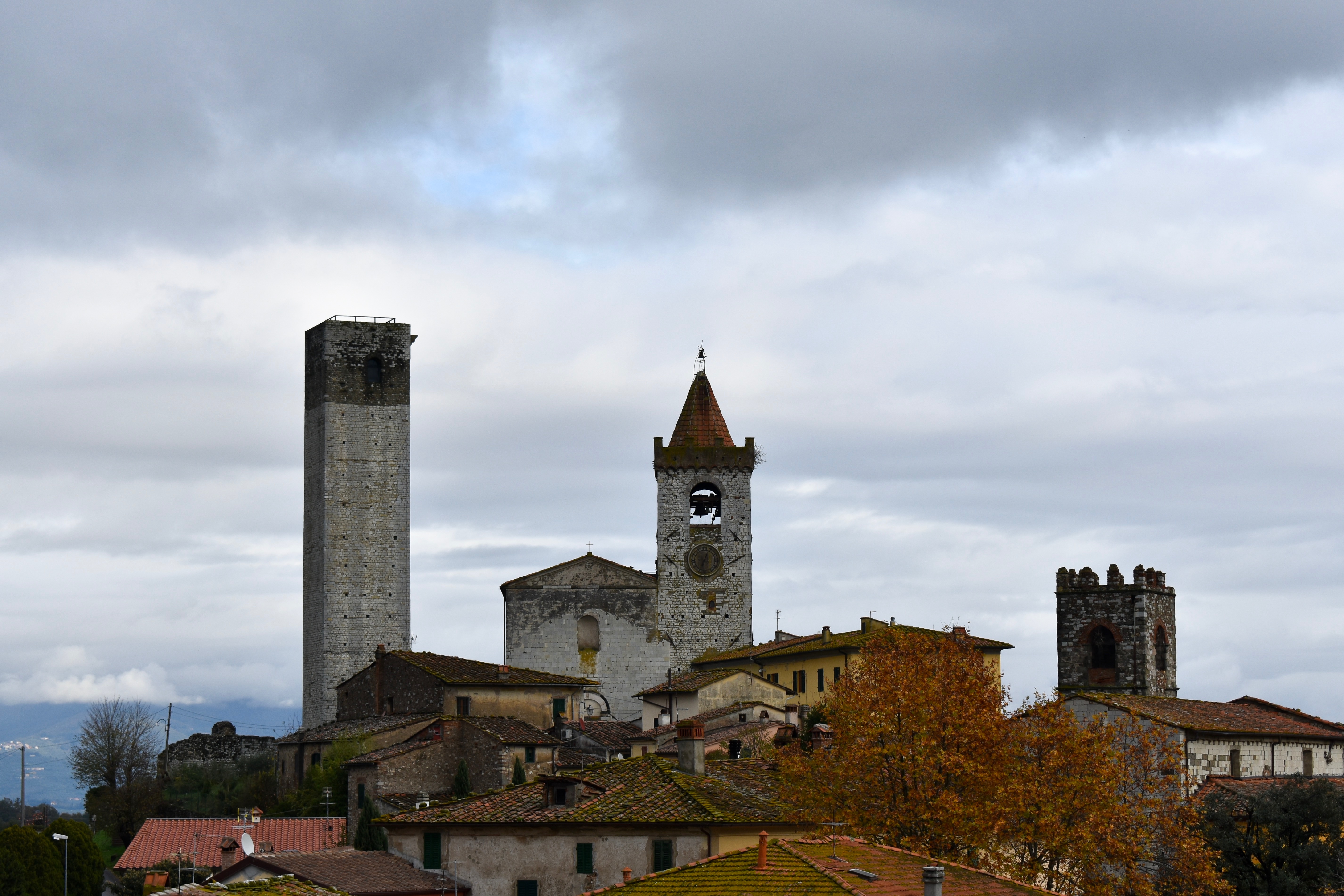 Serravalle Pistoiese, the village saw from the tower

After that I went to Il fienile restaurant in Montale. Here I had lunch with typical food: kale soup, the famous “pappa al pomodoro”, maccheroni with ragù of silent duck, “peposo”, tripe and an apple cake. The maccheroni are not the typical kind , it is home made pasta in a square shape. It is one of the most important types of food since it is connected to the figure of Saint Jacopo the patron of Pistoia. At the origin the sauce was without tomatoes. The peposo is a meat meal with much -really much- pepper. It is an important meal and it was important for the construction of the Dome of Florence, in fact Brunelleschi during the construction of the Dome had a problem. When the craftsmen went to eat they returned a little bit drunk and that was a waste of time. So Brunelleschi decided to make them eat on the scaffolds and he made them eat the peposo.

After this amazing lunch I went to see villa Smilea in Montale. Villa Smilea was a defensive castle. Its name came from latin “sex milea” -six miles- which was the distance between the villa and Pistoia. It was not built to be lived in but it was a place for leisure activities during the pleasant season. There is a yard on the outside which was the farm. Now in the villa you can find some works of arts. There is a tower there too from which you can even see Florence. 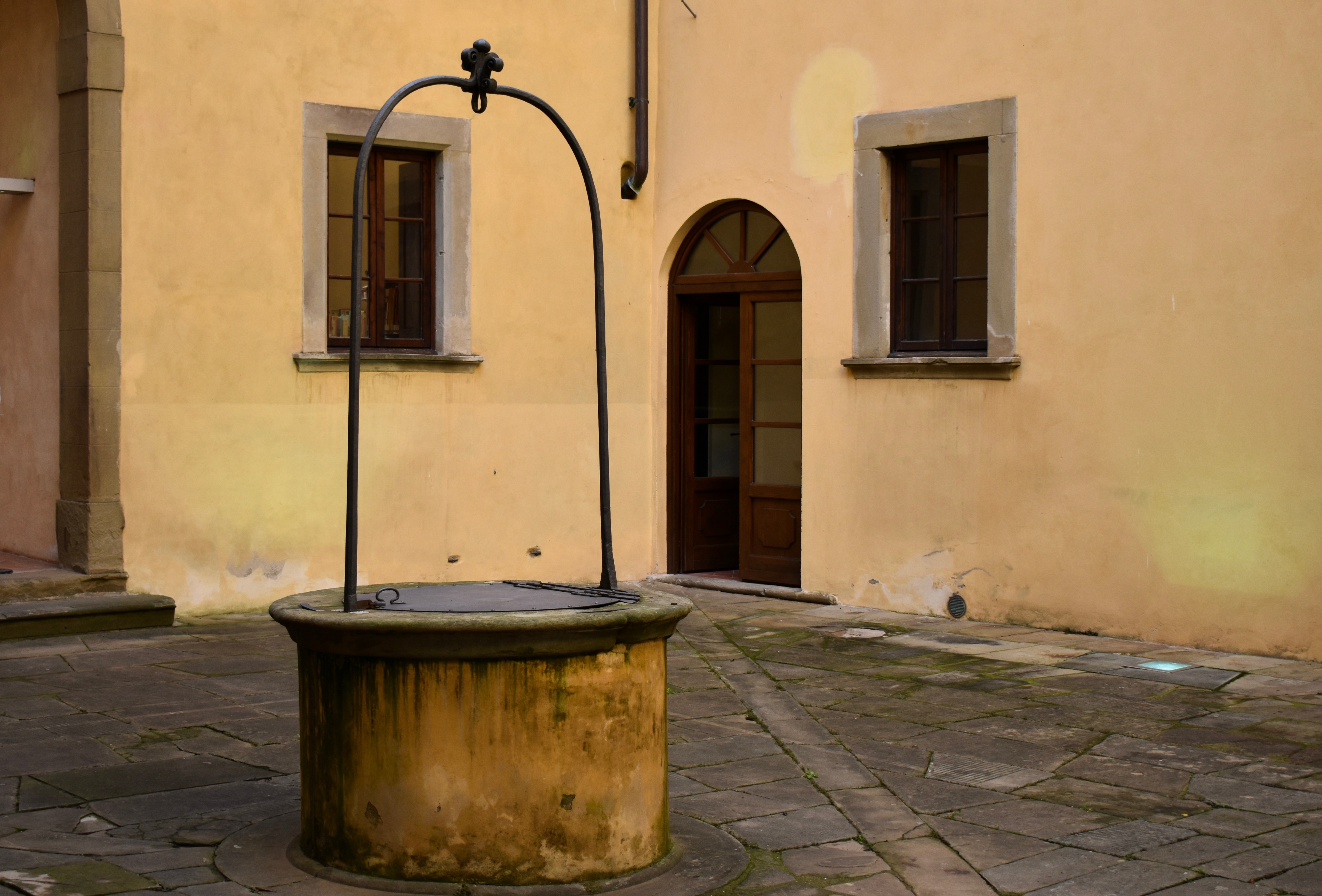 Near villa Smilea you can find Villa Celle it has one of the most important contemporary art Collections in the world. It is a private collection of environmental art organized by Giuliano Gori. Environmental art was born in Celle. The park contains 80 art installations, at the entrance there is a work of Alberto Burri. I didn’t see it since the park is closed during winter but it is open from April to October, the visit is free but you have to book it one or two months before since people came from all over the world to see it.

The last thing that I saw, that has nothing to do with medieval villages, was the stunning Ceppo hospital in Pistoia. It is really amazing, I swear. It has a frieze on it that is wonderful. The hospital was built in 1277, the frieze was made at the beginning of the 1500s. Leonardo Bonafede was taking care of the hospital at that time. He ordered two of the most important shops that worked the “terracotta invetriata”, the Della Robbia and the Santi Buglioni’s, to make the frieze. It shows the seven missions of mercy. At the centre of all these scenes there is Leonardo Bonafede. The last scene is different because it was realized 60 years after because of a collapse. In the last scene there is no more Leonardo Bonafede but Bartolomeo Montichiari who is washing the feet of a pilgrim that is Saint John, the patron of Florence. The last scene was made by Filippo di Lorenzo Paladini with cold painted stucco. This frieze has been reproduced in London and Moscow. I recommend you to go there with someone that can explain you the details of the frieze because I think that it’s really interesting. 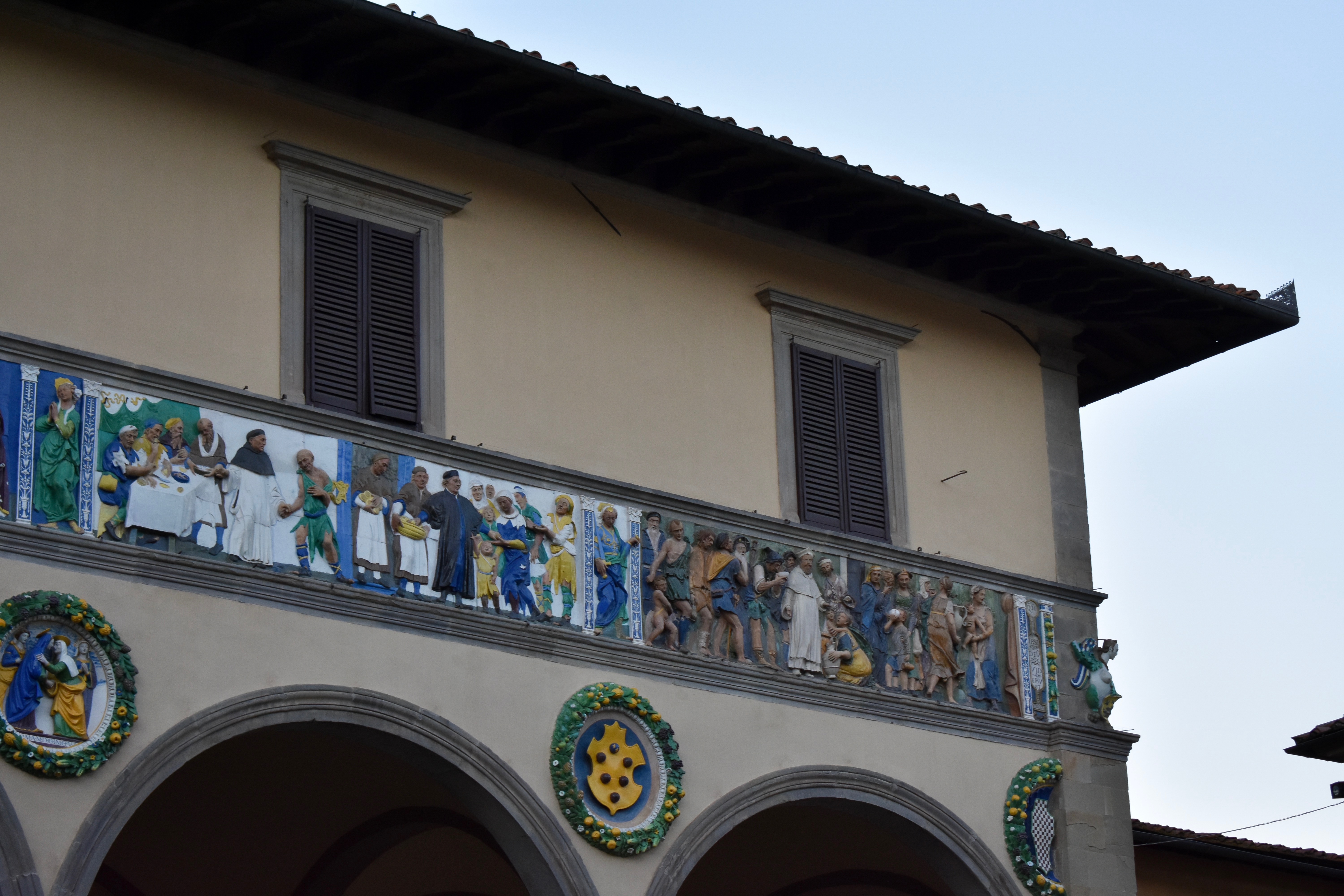 Pistoia, a part of the frieze of Ceppo hospital

The second day was really intense because I saw a lot of things and because I ate lots of food. The first thing that I saw was the Madonnina icehouse in Le Piastre. I swear that it was like finding myself in a fairytale. The ice business was one of the most important and profitable ones. Ice was kept in the icehouses and then was brought to the cities covered by grass with wagons. It was a job done by women and children. The Reno creek flooded the pools, the water froze,women and children broke the ice and brought it to the icehouse. Ice had been an important resource since Roman times -Romans could not resist oysters and they wanted them even in the battlefield, how crazy.- 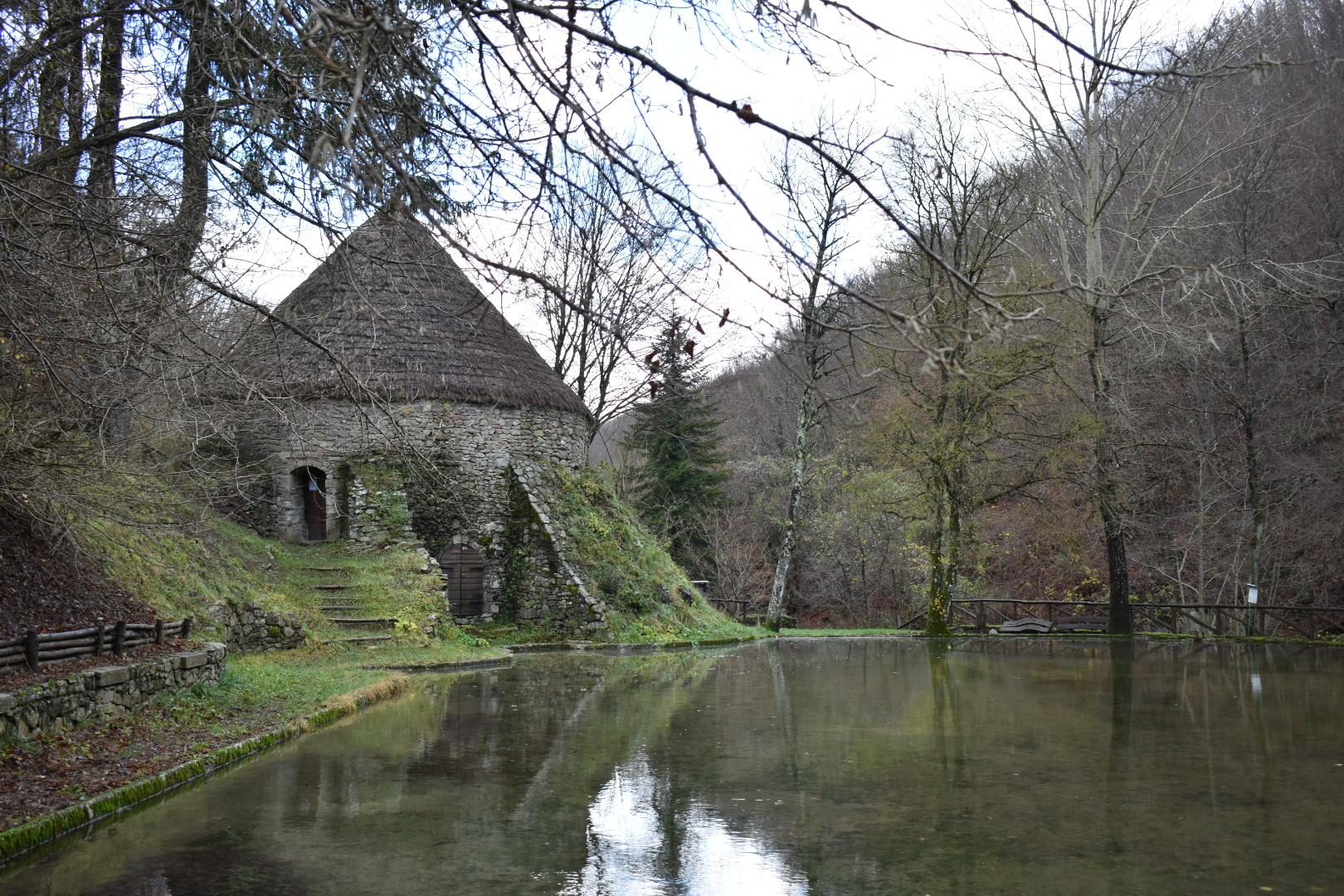 After that I headed to the Ironwork in Maresca. The Papini ironworks has very old roots, there is a bill of sale from 1388, it was called the water factory. It is the oldest ironwork in Tuscany and it worked until the nineties. There is a tree stump in there from the 1200s. A funny fact is that for 40 years in Le Piastre there is the lie championship, it takes place the first week of August. 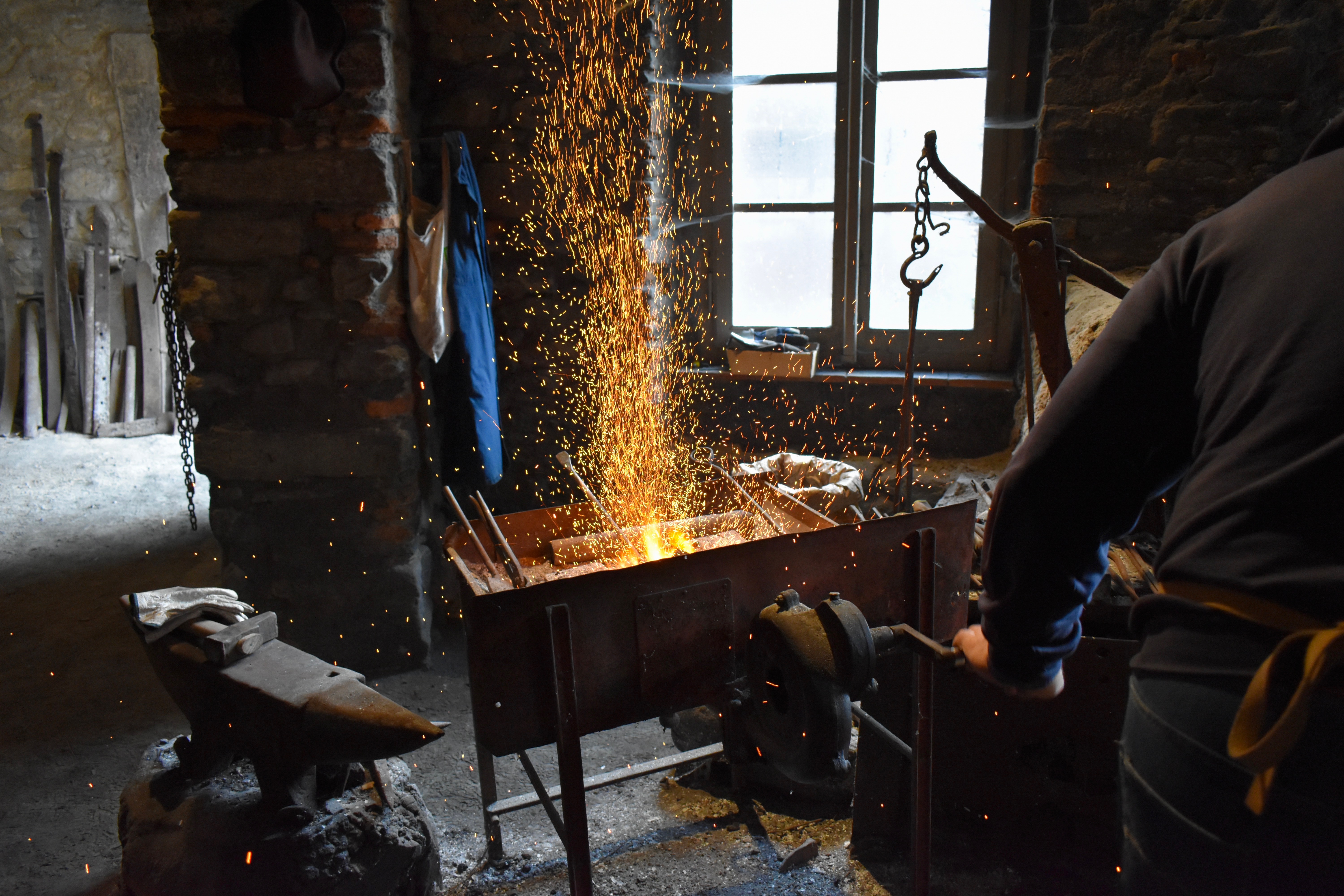 Then I went to see the Italian metallurgical society in Campo Tizzoro. I was not expecting to see all that amazing stuff. The establishment was built in the pistoiese mountains for strategic reason, it was built in six months. This establishment has produced munition for the while world. In there, anyway, you do not find only munition but also lots of guns, typewriters, cameras, lightbulbs and so on and so forth. The things that I loved the most, except for all the typewriters, were the gun used for the technical test for the murder of Kennedy and a gramophone entirely in brass that is still working. But there are lots of other things, the S.M.I. was a very important factory. Another interesting thing that I discovered is that the 10 and the 500 lire came from the same press that makes the munition and that the 1 euro coin came out from the union of the two lire coins because of an overproduction. In this establishment there are anti-raid shelters, they were built in nine months. I visited them too. There is an entrance for every productive sector and one for relatives and children. It is 20 meters underground and it’s really big, in just three minutes everyone was safe. A part of the establishment was given to the Dynamo campo. 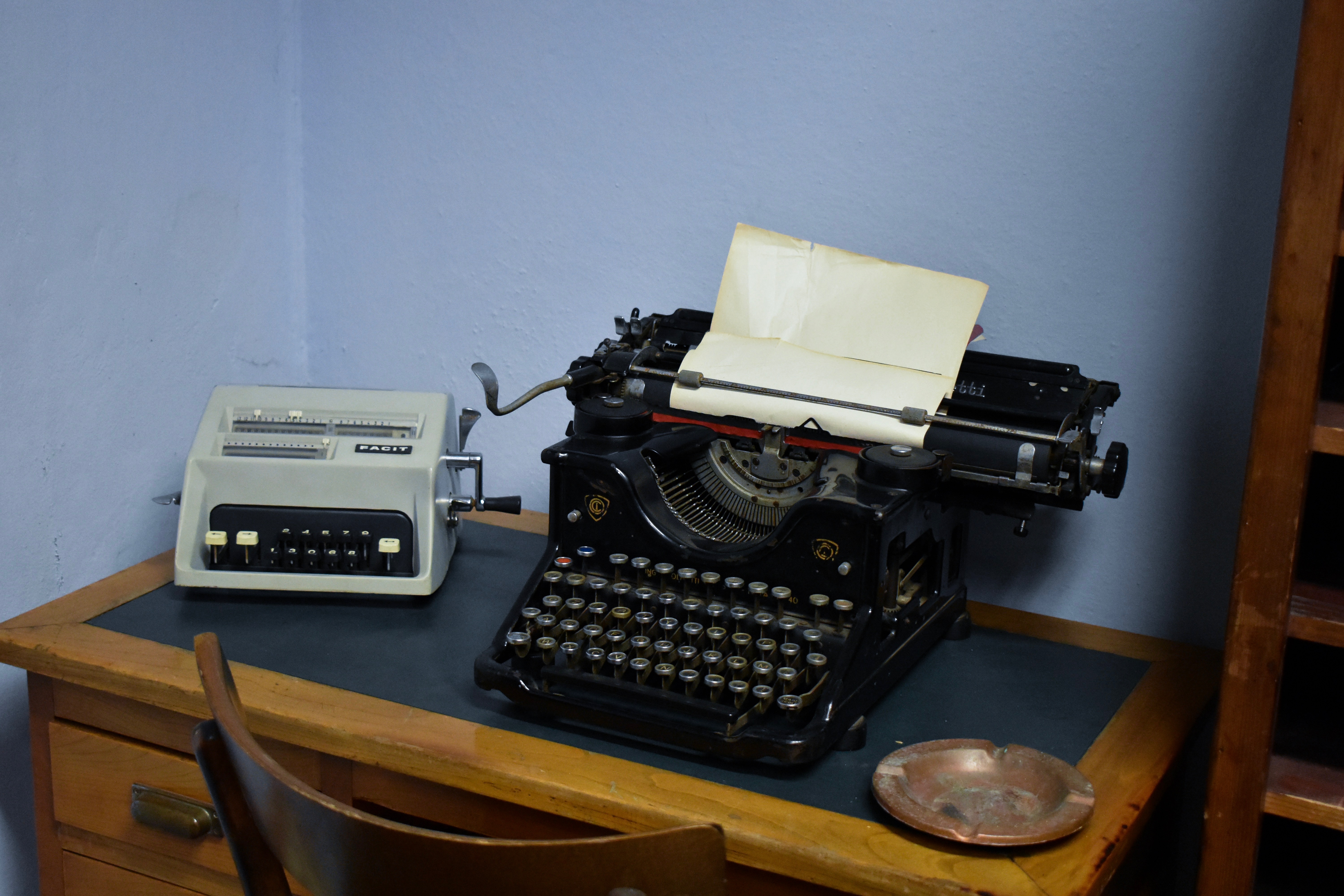 I had lunch at La Saida restaurant in Melo. I ate “tortelli” stuffed with spinach and ricotta and served with butter and sage, the “rosticciana”, the “tagliata” with spinach and potatoes and the “necci” with ricotta and with cow’s cheese. The tortelli of La Saida won the prize as the best tortelli in Melo, the chef told me that they are so good because the water in Melo is really good. They were amazing, I swear. The rosticciana is a typical food, it is pork chops with spices. Necci are made with water and chestnut flour, I ate it as dessert but theyare also made with meat.

To digest I went to the suspension bridge in San Marcello. It is long 212,4 meters and it is 35 meters from the ground. It was an amazing experience, I went there during the sunset and that makes it more magical. The view from the bridge is amazing. You can see mountains, streams and the villages near it. It was made to enable the workers to get from Popiglio to the factory onthe opposite side, without this bridge they had to walk 6 kilometers. 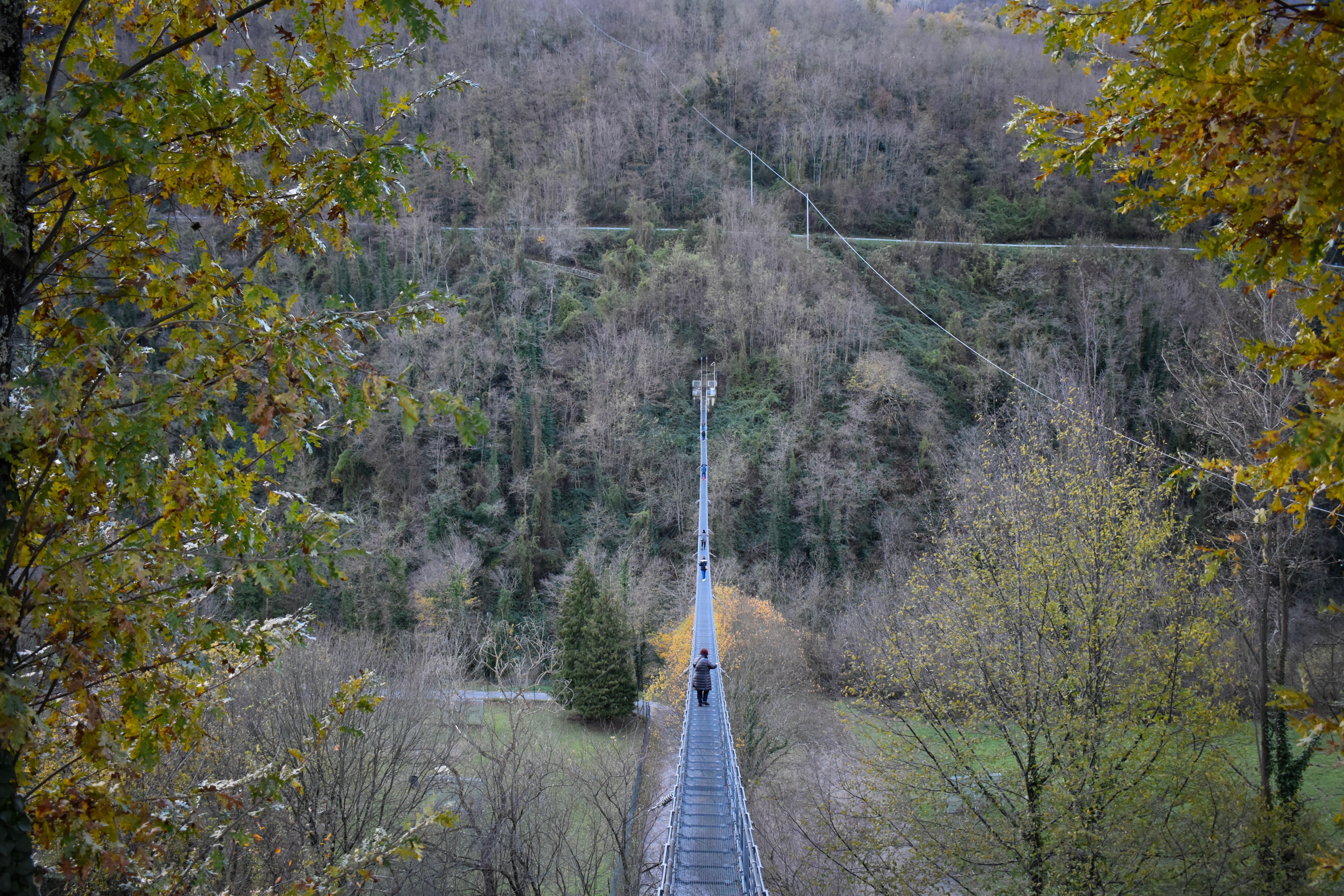 At dusk I went to Popiglio. Here I saw an amazing “Pieve” from 1270. In a side wall there is a very ancient iconography of a warrior with a sword and an helmet of the first crusade. It is full of works of art such as a masterpiece of Pincellotti, a sculptor who worked with Bernini.

The third day was the last day. This day I saw the villages in Valdinievole. The first village that I saw was Collodi, where the author of Pinocchio was born. I think that it is the village that I loved the most. It is really silent and magical. It’s like being in a fairytale. Here there is a historical park dedicated to Pinocchio, it is closed in winter so it is better to go there in spring because it is really amazing and full of flowers. You can find a villa too. It is called villa Garzoni, it’s a villa from 1600-1700 and it is for sale. If you are athletic, and brave, enough you can go to the top of the village. I almost died but I swear that it was the best view that I had seen in my life and it worth the fatigue. 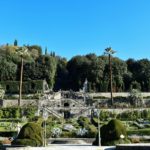 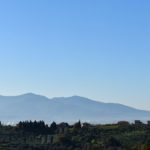 Collodi, view from the top of the village 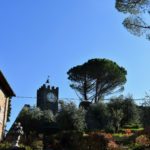 Then I had to go down to visit another village, the village of Buggiano Castello. It is a very small village but very suggestive. All the houses there are red, the so called Buggiano’s red. This village is also called the citrus fruit village because in the houses there are gardens where people grow cirtus fruits. There are one or two weeks between April and May where these gardens are open to visit.

I had lunch in Montecatini Alto village, the village is really cute. I had lunch in La Torre restaurant. At the entrance you find a very beautiful dog. I ate the “zanzella”, a typical ricotta, spaghetti with mushroom, a giant porcini mushroom that melted in my mouth -AMAZING!- and a lemon ice-cream with fig marmalade on top. Then I visited the village, it is very big. There is a funicular that connects Montecatini Alto with Montecatini Terme. The most ancient church is dedicated to Saint Peter. It has a medieval architecture but was restored during the years with baroque additions. The church keeps the relics of Saint Barbara, protector of those who manage explosive weapons. An interesting thing is that the confessionals are made ofstone.

I recommend you to visit those villages (and to eat this amazing typical food) because they are really hidden treasures that everyone should knowabout. 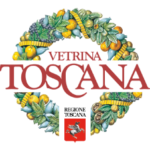 All the restaurants mentioned belong to Vetrina Toscana association