When arriving in a new place, there is often a moment of disconnection when you see something you think is familiar and then find it is not. For me, one such moment came as we circled waiting to land at Pisa, looking out of the window at a forest canopy below, there were bulbous, lollipop shaped tree tops sitting above the canopy, looking like broadleaf but with the colour of pines. These were maritime pines (Pinus pinaster), native of the western Mediterranean, and a reminder that it had been a long time since I last visited the Mediterranean.

When you mention Pisa, most people’s first thoughts are of social media images of tourists pretending to prop up/push over a medieval stone tower, thereby (mostly) subconsciously celebrating one of the great inventions of the Italian Renaissance, the use of perspective in art. In some way this can be seen as part of the modern pattern of fast tourism, rather like fast food: turn up, Instagram the experience and hop back on the bus to the next iconic site without appreciation of the space in-between or time for refection. However, we weren’t here for quick-snap tourism, but as guests of Italia Slow Tour to explore the Valdinievole area, in the heart of Tuscany, by mountain bike. There were seven of us, Dries and Nele from Belgium, Bastian and Natalie from Germany, Mara from Milan, plus Ulli and me, with our local bike guides Massimo and Graziano of Bike Experience Tuscany (Oh and we were also followed round by small film crew).

Accept Google cookie.
Please allow cookies for view the video by clicking Accept on the banner.
Cycle Route 4205370 – via Bikemap.net

Our first day out started with a short ride from the hotel to the station, learning to ride The Italian Way. Apparently in Italy it is perfectly acceptable to cycle the opposite way up a one way street, certainly we got no hassle from motorists coming the other way, as we all agreed would have happened at home. Similarly to my Slow Tour trip to Milan last year I was surprised how tolerant Italian drivers are of cyclists generally. All 9 of us took a train to the nearby town of Pescia. Here again it was interesting to contrast with the situation at home in the UK, where the rail companies are trying to keep bikes off trains, here (as with other parts of mainland Europe) getting the whole group with all nine bikes onto a train is not an issue, which makes cycle tourism much easier.

The town of Pescia was once famous for silk production, but now more so for its flower market. However, in September the carnations are out of season, and as we cycled out of the town along high river banks, we looked down on rows of empty polytunnels, and nurseries with rows of trees in pots destined to be planted out in parks and gardens across Europe. The riding was easy under a bright blue sky, those of us from the more northern latitudes, the Belgians and the Scots enjoying the unaccustomed warmth. However, those from southern Germany and Italy, like the polytunnels, were preparing for winter. After waving to the film crew on the far bank and crossing a bridge, we headed away from the river towards Montecarlo. No, not THAT Monte Carlo, this one is a Medieval Borgo, the term Borgo has the same roots as borough in English or Burg in German, meaning that it was a self governing settlement. The name Montecarlo actually just means Charles’ Mountain. The Charles in this case was the elected King of Bohemia (1347) who also owned a wee place called Luxembourg and went on to become King of the Romans (1349), King of Italy (1349) and King of Burgundy in 1365, which made him the the ruler of all the kingdoms of the Holy Roman Empire. Yes, he was also the Holy Roman Emperor… Keep up at the back there!

Now as the name suggests, Montecarlo is on top of a hill, so there was a bit of a climb to get there, but it is worth it. Along the way you pass though olive groves and vineyards, Montecarlo is famous for its wines and has an annual festival to celebrate them (which sadly was the week before we got there). The borgo was one of our refreshment stops where we were treated to generous serving of antipasto accompanied by several bottles of wine (this was just elevenses, you understand). Suitably refreshed, we had a wee stroll about the town and were taken to see the Teatro dei Rassicurati which from the outside looks much like the other buildings around it, but inside is an amazing pocket theatre. It is the second smallest theatre in Europe, with the smallest being in Budapest. Sheds used as venues in the Edinburgh Fringe Festival don’t count apparently. Built in 1795, it was was extensively restored in 1894. In the inter-war period, it fell into disuse and by 1966 it was at risk of demolition, however, it was rescued and restored again in 1973 and is now in regular use. The oval auditorium seats 140 and is surrounded by 22 tiny boxes spread over two levels above, and an impressive painted ceiling. One of the theatre goers in the late nineteenth century was young Giacomo Puccini, who went on to become one of the greatest composer of Italian opera. One wonders how much this experience influenced his later work.

We set off once again, riding though the Tuscan countryside, occasionally stopping for photos and to watch the olive trees being pruned, well I stopped to take a photo, the others just went on…

Our next scheduled stop was the Quercia delle Streghe or the Witches Oak. An amazing oak tree (Quercus pubescens), estimated to be up to 600 years old with a girth of ~4.5m and a canopy circumference of ~40m. Legend has it that a group of witches held their sabbatical rites right on the branches of the tree, creating the broad lateral grow we see today. Personally, I think it much more likely that the tree was pollarded and the branches trained out laterally, probably originally to increase acorn masting for pigs. There is also another story this tree is famous for, it is where Pinocchio was hanged by the assassins who wanted to steal his four gold coins. In Carlo Collodi’s original story (first published in 1881) the tale ended at this tree, with Pinocchio dying at the end of chapter 15. However, Collodi’s publisher didn’t like this ending, as the story was serialized and proving very popular, so he persuaded Collodi to allow Pinocchio be rescued by the the Fairy with Turquoise Hair (or “Blue Fairy” in the Disney version), and then to write another 21 chapters. The full story was published in 1883 as the The Adventures of Pinocchio, and later became an international best seller and was turned into a sanitised Disney film.

Photo and cultural/nature stop over, there was a glorious dirt road descent, ideal for testing the bike’s front suspension and tyre traction. The next stop was San Gennaro, and of course, this being Tuscany, the hamlet is on top of a hill. To get there, we rode single track Strade Bianche through the woods, olive groves and vineyards, arriving back on tarmac just below the village.

We stopped by a traditional drinking fountain with a stone trough to fill our water bottles, the day was getting very warm (from a Scottish perspective). Although it was nearing lunchtime, culture comes before food, with a visit to “the old Roman Pieve”. Yeah, I had to look up Pieve too, according to Wikipedia it is a rural church. Being one of the oldest buildings in the village (dating from 980 AD) it was near the top of the hill. To get there, there was a winding cobbled street, with a final ramp of 18%! 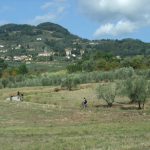 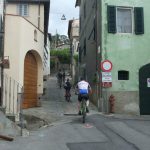 San Gennaro, Climbing to the Pieve 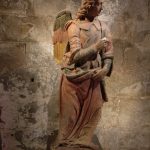 Was it worth it? Yes. The sign board outside said that it retained “its original Romanesque characteristics”, while also noting that the capitals at the tops of the columns were decorated in “Pre-Romanesque style”, basically recycled from earlier buildings. The sign also says “Of particular interest inside the ambo [Catholic term for pulpit] dating back to 1162 …”. However, oddly, the sign board neglects to mention this wee church’s greatest treasure, a polychrome painted angel statue, is the only known statue made by Leonardo Da Vinci himself (confirmed by Carlo Pedretti).

The thing about visiting all this cultural stuff is that it does make you rather peckish, fortunately it was just a short distance down the hill to lunch at Ristoro Il Corno, just a simple four course affair, you understand. I can highly recommend the Pecorino Toscano with honey. With a few calories to burn off, we set out for Collodi, a name you might recognise from above. Carlo Collodi is actually the pseudonym of Carlo Lorenzini, who took the name Collodi from the village where his mother came from, and it was that village we where aiming for. On seeing it for the first time, I was struck by the way it appears to tumble down the hillside and is then terminated by the seemingly overblown Villa Garzoni at the bottom. What I couldn’t see from that angle was the water gardens attached to the villa, nor for that matter could I see the Parco di Pinocchio (a theme park dedicated to a wooden puppet). For the record, the Villa Garzoni was on sale for a mere €19,000,000 a couple of years ago, just in case you happen to find a winning Euro Millions lottery ticket down the back of the sofa.

We visited the lower part of Villa Garzoni’s water gardens and the Butterfly House. Collodi is on the list of places I would like to visit again, I would like to have the time to explore the village itself and also see more of the water gardens. Not sure I would go to Parco di Pinocchio, although we were told that it isn’t just for kids, there is stuff for adults there too, with the original tale far darker than the Disney version many of us are familiar with. 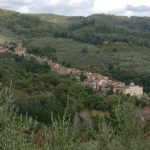 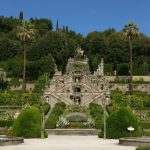 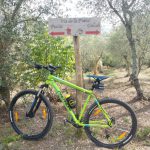 “Via della Fiaba” by bike

Leaving Collodi, we followed the Via delle Fiabe (the path of the fairy tales) back to Pescia, which partly follows an ancient mule track paved with flag stones. While this may sound like straight forward riding, it was highly technical in parts, in particular the 15% descent with stone cross drains on the path followed by a narrow bridge and a hairpin turn. Walking this section is highly recommended (which we all did). The path is great fun and takes you through some lovely scenery before eventually bringing you out onto black top on a ridge overlooking Pescia, with the final part of the route all downhill, which was also a lot of fun. Then it was train back to Montecatini Terme where we were staying (at one the local bike Hotels), a spa treatment, and an amazing five course dinner of Tuscan specialities at the restaurant Arnolfo.

If you’d like a different view of the same trip, you can read Dries’ travel diary here and Nele’s travel diary here. Oh and that film crew that was following us, here’s the film they made, hope you enjoy it.