Enjoy this unique city by bike and on foot

After exploring Maremma Park for a couple of days, Fabio took us to the Grosseto train station, and we went to Florence via Pisa. We left the train at the main station and walked to the nearby Rivoli Hotel where we were supposed to stay for two days in a beautiful and spacious room. After a little rest, we started to explore the city on foot.

First we visited the impressive Santa Maria Novella Church (the station is named by it). Then we spent quite a time at the cathedral – il Duomo – to admire it from each side. It’s the fourth large church in the world with a tremendous dome and was built in the 13th century. The clock tower “Campanile” was constructed by Giotto in the 14th century. The formerly plain facade was beautifully decorated in the 19th century. 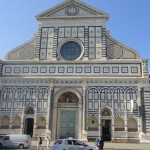 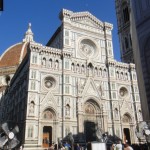 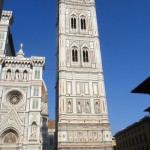 Strolling through the streets, we came to the Ponte Vecchio. This is a very special bridge over the river Arno which carries small craftsman houses. In former times, butchers lived here but the nobles that used to cross the bridge to come from Palazzo Vecchio to Palazzo Pitti on a secret passageway wanted neither the sight nor the smell of dead animals. Therefore, the houses were rented to goldsmiths who had to pay the double rent… Nowadays, there are still many shops with a very opulent display of gold jewelry – and the tourists seem to like it! 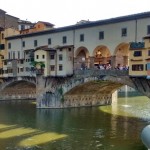 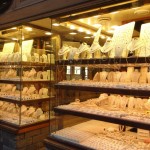 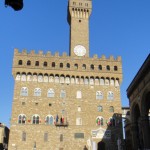 Finally, we came to the Piazza della Signoria where we were dazzled by the huge dimensions of the Palazzo Vecchio. To grasp the dimensions of this building at leisure, we stopped at the restaurant “David” just in front of it. Eating fine pizza and drinking good wine, we could admire the name giver: The famous statue of Michelangelo quite near by (yes, we know, the original is in a museum but nonetheless)! We stayed there a quite a while and returned to our hotel long after sunset.  Enjoying the quiet atmosphere and the air conditioned room, we looked forward to the day ahead.

After a nice breakfast in the Rivoli Hotel’s garden we were pleased to meet Silvia who had been so kind to arrange the whole trip for us, and Virginia the photograph who took pictures and videos from our Florence tour. We walked to the office of the Florencetown, an agency for guided city tours, and met our guide Giulia B. 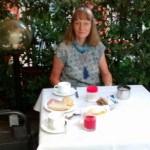 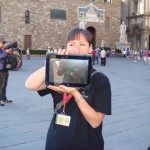 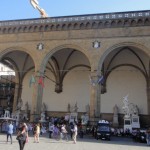 We were booked for an “Inferno Tour” which is based on the “Inferno” novel by Dan Brown. We were supposed to see several places that Robert Langdon, the hero of the story, had visited, too. First of all, we walked to the Cathedral square and admired Il Duomo, this time in the morning sun. Giulia drew our attention to the statues on the front facade: Directly beneath God blessing Jesus and Mary there are figures of local artists and craftsmen which speaks for the self-confidence of the Florentines.

We continued to the piazza della Signoria to see all the beautiful buildings there constructed of the regional brown “pietra forte” that means strong stone. First of all, the Palazzo Vecchio, of course, which had been the home of the Medicis. This family reigned in Florence for more than 300 years.
On the other side the “Loggia Italiana”, an open hall, was to be seen. In former times, soldiers used to gather there. (In our home town Munich, there is quite a similar but much smaller loggia which is called “hall of the warlords”). Guilia draws our attention to the lion statues: The Medicis kept real ones as pets. 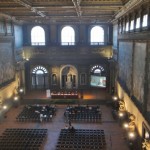 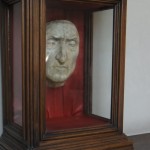 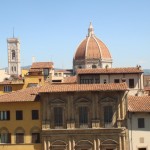 We entered the old palace to visit the museum inside. On the first floor, there is a huge assembly hall the walls are adorned with battle scenes showing the victory of Florence over Pisa (painting started by Michelangelo who lived in the palace for a while, and completed by Vasari) on the one long side of the room. On the opposite wall the war against Milan is shown (painting started by Leonardo da Vinci and completed by Vasari). On one of the mural paintings, a green flag with the inscription “cerca trova” can be found. That means: search and you shall find. This becomes the motto for Langdon, the hero of the Inferno novel. To make it short: He has to find the mask of Dante Alighieri, poet and author of the “Divina Commedia”. The story is about hell and paradise, as we know.  When Langdon’s pursuers come closer, he must flee out of the palace. Fortunately, there is a hidden door in the room of the maps! Just press a special button on the Armenia map, and the door will open… We stayed in the museum a little longer and enjoyed the view over the city. 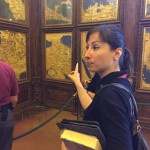 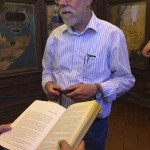 Wolfgang listening to the guide 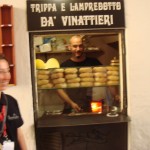 On the way back to the Cathedral Square Giulia showed us a peculiar snack stand because it is mentioned in the Inferno novel: It’s common in Florene to eat fried lampredotto which means cow stomach. None of us wanted to try it, so we don’t know what we missed. Finally, we visited the beautiful Baptist Church opposite to the Cathedral and admired the large dome adorned with mosaics on a gold background from the 13th century, and an impressive glass window showing The Virgin. This church which is dedicated to the Patron Saint of Florence, St. John, has always been of central religious importance. Up to the 19th century, every native Florentine was baptized here. The octagonal shape symbolizes eternity. After leaving the church, we admired the famous east portal by Ghiberti with ten relief panels showing scenes from the Old Testament. We walked back to the Rivoli hotel for lunch, and in the afternoon we had a guided bike tour which was organized by Florencetown, too. We appreciated the airstream while cycling as it had become rather hot meanwhile. Our guide Giulia D. sometimes took us on small streets, avoiding the tourist crowds, and led us to Oltrarno which means “the other side of river Arno” on a bridge next to Ponte Vecchio, and showed us the quarter she lives in. “Florentines prefer Oltrarno”, she thinks. 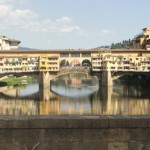 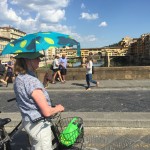 Gaby on her bike 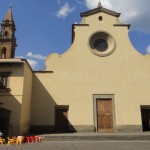 We arrived at piazza di Santo Spirito which is one of the nicest squares in Florence. The inhabitants love it for its bars and trattorias and also for the market that takes place every day here. Inside the Basilica di Santo Spirito we saw an impressive marble statue of Christ made by Michelangelo – one of his early masterpieces. Michelangelo lived here for a while. It is told that he secretly dissected corpses in the basement of that church in order to study human anatomy which was strictly forbidden in those times.

Later on, we came to see Palazzo Pitti (from the outside) and now Giulia had a special treat for us: everybody got a cone with ice cream from the Gelatteria Pitti! The special thing about this ice cream shop is the following: In former times, a special ice cream flavour was created here which made the Medici’s happy. Buontalenti was the confectioner, and it is named after him. So people come and say: “One coop of Buontalenti, please.” It tastes deliciously like creamy vanilla. What a nice way to cool down! 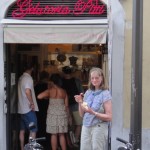 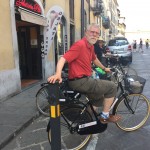 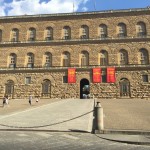 Finally, we had to go back. What a pity that it was too late for the beautiful Boboli Gardens or the museums in Palazzo Pitti… but we’ll go there another time. We gave back our bikes and said good by to Giulia who had led us through Florence in an original and witty manner!

Walking “home” to our hotel, we took a break on the piazza in front of Santa Maria Novella, listening to some buskers and watching the people pass by. We felt quite comfortable in Florence! Later in the evening, we were indulged again by the friendly and attentive waiters of the Rivoli Hotel. We had really delicious food and wine at Benedicta Restaurant: We had stuffed zucchini flowers and a colourful risotto with beef strips, and a lemon sherbet for dessert.  By the way, we were quite fond of the pretty Murano style water glasses. We were told that they are available just round the corner, and we found the shop “Galletti” in our evening walk near river Arno,  and we saw Ponte Vecchio again, wonderfully illuminated over the river. 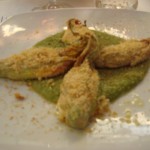 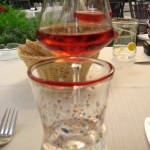 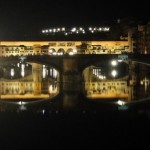 A great day came to an end. We are very grateful to Italia Slow Tours for this experience!

The airport of Florence is an international airport connected to the city centre by a bus service (rides every 30 minutes, 6€, it takes 20 minutes to the city). For transcontinental flights you have to stop in other airports. Consider to get to Florence by train from other major Italian cities (from Rome or Milan, i.e.), both Trenitalia and Italo companies stop at St Maria Novella railway stations.

Florence is a small city and all the most important monuments are close to each other so the best way to visit the city is on foot or by bike. In Florence is available the mobike bike sharing service (it costs 0,69€ for a 20 minutes ride). Anyway is there public transports, a single ticket costs 1,5€ and lasts 60 minutes.

Florence is the capital city of Tuscany region, in the centre of Italy. The city of Italian Renaissance! In your sightseeing tour, don’t skip St. Maria del Fiore cathedral with Brunelleschi’s great Dome, the Old Bridge on river Arno and the Uffizi gallery where you can find some very important works of art (see Botticelli’s “Primavera”). Get the tickets on line, to skip the long queue!

The best view on the entire city is from Piazzale Michelangelo (i.e. Michelangelo sq.) and you should visit Palazzo Pitti too, with its amazing Garden – the Giardino di Boboli -. If you consider a tour nearby, we recommend you to visit Fiesole.

We also offer a FlorenceTown tour promo to our users! Here you can find a travel diary of the “Inferno Tour” inspired by Dan Brown’s novel.

Florence is quite expensive and so are the accomodation, but Italia Slow Tour user can get a special discount on some hotels. Enjoy!