The words of the poet, Franco Arminio, ring out in the evening breeze as we all sit in a huddle of white chairs under the shadow of the XI century tower in Piazza Torre. This is an English translation of Arminio’s poetry. He selects an American girl to translate it for him. Then a Sardinian. Then an Emilia-Romagnan. And finally a native Biccarese. 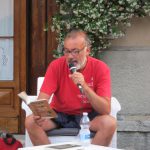 Franco Arminio reading one of his poems 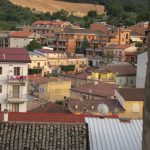 A view of Biccari 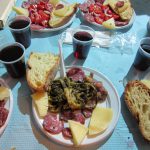 This is the beauty of Italy. It’s still a country of kingdoms. As a nation it wasn’t united until 1861, and Italian as an official language didn’t really take root until after the invention of the television in the 1950s. So each region still has its dialect. Arminio is obviously is a lover of dialect. Just as he is a lover of the south. If you didn’t know where he was from, his t-shirt clearly spells it out: ‘SUD DI NESSUN NORD’ (south of no north). So he is in his element in this small town of Biccari, province of Foggia in the heel of Italy.

Why are there so many Italians from all over Italy gathered in this hamlet listening to Arminio? Because this weekend is festa time and the annual festival ‘Borghi Autentici d’Italia’ have chosen this beautiful Puglian community of almost 3,000 people to host their annual four-day celebration. A weekend of street food, music, dancing, cultural events and conferences will bring more than 15,000 people to these its streets. Tuscans brush shoulders with Lombards and mountain-folk from Piemonte as dozens of stalls are set up in Piazza G. Matteotti. Every stall represents a different region. The Biccaresi laugh at the irony that the first stall to arrive is the most northern region, Friuli-Venezia. They stir giant pots of polenta and serve up plates of sour kraut and cheese. Calabria arrives next, a team of four from the shores of Roseto who warm spicy nduja over a candle. Their fennel sausages are divine and they always have the biggest queues of people. I remember watching an episode of  ‘Jamie Oliver in Italy’ and in which he held is head in his hands with frustration at trying to encourage Italians to try different dishes and overcome their narrow-mindedness.  However, that spirit is not present here. The local Biccaresi try fried Sardinian treats and welcome the variety with great appreciation. I sample a little of everything, including the wonderful local produce from Biccari like the fresh wine, ‘Nero di Troia’, cooled in streams on the hills of Monte Cornacchia which is served with cacciocavallo, caccioricotta, pane e pomodoro. 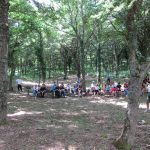 People gather in Monte Cornacchia for a music concert 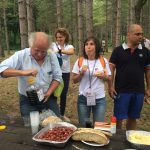 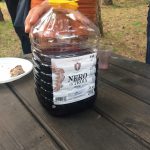 “If you take bread and tomatoes, and add a little olive oil from Biccari, it’s heaven on earth”, Michele, a local, tells us.

Dusk is falling and the stage has been set up. The square begins to fill as people dance la pizzica and la tarentella to the music of local musicians including ‘i tamburellisti di Otranto’ and the ‘Orchestra Popolare La Notte della Taranta’. Dancers with curly long brown hair turn in the air like marionettes and children thump Puglian drums with impressive skill.  We watch from a terrazza of a local nonna and then make our way to the square to join in. 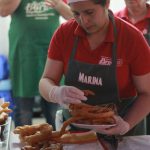 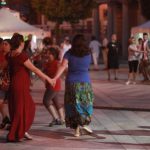 Dancing in the square photo by Pauline Fitzgerald 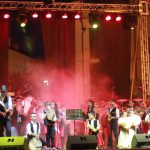 The People make the Place

Despite the fact that this small town faces the threat of depopulation, some young people stay. Magda, 33, an archeologist, has been helping out with the festivities. She moved back to Biccari after finishing her studies and is very proud of her land. “I think Biccari has been chosen as the host town for the ‘borghi autentici’ festival above all for the authenticity of the community. The simple and genuine people who know how to welcome, host, and make community”, she says. I’ve had the privilege of meeting these people, including Magda’s grandfather, Giuseppe Salandra. He is 90-years-old and is an active user of Facebook. He showed us round the Maria Santissima Annunziata church that is colloquially known as ‘the mosque’ owing to its domed roof. 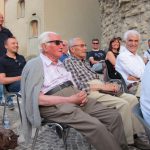 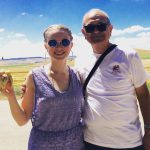 Figs at the roadside with Michele 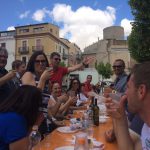 ‘Salute!’ at the Convivium

Alongside Giuseppe (I’m still waiting on his friend request), I think of Michele, a retired mechanic who works as a volunteer for his community and stopped at the side of the road to give us fresh figs from his farm. Or another Michele (it’s a popular name in these parts) who takes us to a centro commerciale at the mention of where a sunhat could be purchased, and buys us all a macchiato coffee and we pass la controra together.

“I have never had to chance to travel a lot, and so I am so grateful for this opportunity because you have brought all of Italy to us” writes a girl on the Biccari Facebook Page. Gianfilippo Mignogna, the local mayor, is visibly moved by her words as he reads this out to us. His words equally move us, when he gives his final ringraziamento at the closing of the festival. 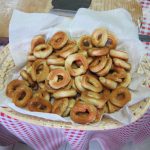 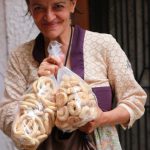 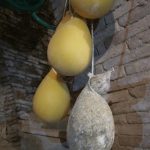 “Thank you to those who we have just met us and greeted us with a hug. With the promise of return. Or an invitation to go to them. In short, to see each other soon. To those who took my number. To those who stopped and talked to our old people sitting in front of their houses. To those who walked the tiny streets and woods…I hope this festa can leave its mark. Not only for its success but also because it’s part of a much larger vision…”