Herculaneum between history and fate

All you need to know to enjoy this amazing city

The eruption of Mount Vesuvius in 79 a.D destroyed the cities of Pompeii and Herculaneum, but created a myth. And those poor fellows died under the lapilli rain left to their heirs a high-value resource: the great archaeological sites. Nowadays the sites are the main draw of the city, but what people don’t realize is that in Herculaneum there is much more to discover. After a pizza break, my friend and guide Ciro and I visit the amazing Virtual Archaeological Museum in via IV Novembre. Its itineraries are truly captivating and fun, but also educational. Its installations are as spectacular as those of many new theme parks. It’s definitely worth visiting. 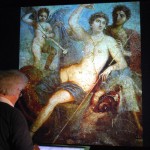 Patrizio in the Virtual Archaeological Museum 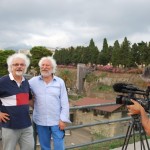 Patrizio and Ciro in Herculaneum

Near the sites there is an even less known itinerary, called Miglio d’Oro (Golden Mile). This tour is a walk through 18th century villas, which are still miraculously intact (in some cases they have been restored). The real surprises of the city are the green spots that survived the building development. Discover these farms, vegetable gardens, fields and farmhouses located in the city centre. These people are very proud of their homeland and their small but excellent productions of wine and tomatoes. This is because the Volcano made the land really fertile. Moreover, a lot of them own a farm holiday or a B&B.

The path leading to the Volcano starts here in Herculaneum, and then passes through the National Park. Going uphill, you will notice that the marks of the urban decay gradually thin out. On the top a breathtaking landscape welcomes you. It is like being in the forests of Trentino, but with better weather conditions. The gates of the Natural Reserve protect an intact forest of holm oaks, pines, chestnut trees and maples. After the forest the volcanic vegetation is more rarefied and consists mainly of lichens and brooms. I was there during the flowering of the brooms, it was a great walk with an amazing view. On Colle Umberto there is the old Observatory. It can sound like a dusty old museum, but it’s not at all. It will tell you about the geological and cultural history of the territory. It was invented and built in 1841 by the physicist Macedonio Melloni, who was later fired by the Bourbons Family because of his republican ideas.

Then, obviously, there is the crater. The guides will tell you all about the Volcano and you will listen carefully to them, in astonishment, in such a surreal atmosphere. You will wonder if you are at the beach or in the mountains… These places are amazing, and so are the contradictions that compensate their perfection. In one of the best places in the world, half of the city is unlawful… However, in the whole area lingers the Neapolitan philosophical wisdom and the idea of the inexorability of the Fate. One does not even have to ask if the Volcano will erupt one day, or if the evacuation plans for a million of people do have sense. It’s a given; for sure one day the Volcano will erupt and the evacuation plans are surely improper. One can only wonder when this will happen. It’s like death, sooner or later it will come for everyone. So…carpe diem, seize the day! This place is such an ode to life; here men, tomatoes and buildings grow and live seemingly a happy life, waiting for the announced catastrophe…