Following the trail of the Sea Peoples

We definitely spent the bast holidays of our childhood in the Maremma region.

I (Patrizio) used to go to Marina di Grosseto and to Castiglione della Pescaia with my parents. We liked to go by foot to the farthest beaches, which were unreachable by car (for example Cala Violina and Cala Martina near Follonica).

I (Syusy) used to go camping in Talamone with my parents. And later, when we were grownups, we went on holiday to Giuncarico, a little village in the Maremma region. The Maremma is a place full of history and traditions, it’s the home of the butteri, that is to say the local cowboys, and it houses, among other things, the Uccellina Natural Park. Some years ago we sailed along the Tuscan coast, investigating the mystery of the Orbetello Lagoon. The Argentario promontory is one of the most significant places of our ancient history. Here the marks left by the Sea Peoples are more evident than anywhere else. The Sea Peoples are the very first people who colonized the Mediterranean Sea, even before the Romans and the Etruscans. The first marks are the megalithic polygonal walls of the city of Orbetello. They are massive and extremely high, and they even extend underwater for 7 meters. These walls have existed for centuries thanks to their particular shape, but due to some recent buildings they have suffered from subsidence, which has compromised their elastic structure.

The whole Argentario area is an archeological mystery indeed! Mario Pincherle, an engineer and archeologist, studied it. At the time, Orbetello was a harbor enclosed by an artificial lagoon, which was connected to the sea through many canals. Actually the Argentario peninsula is anchored to the mainland by two strips of land, the Tombolo of Feniglia and the Tombolo of Giannella (and now there is also a bridge). We went to the Feniglia area, precisely near the Gulf of Ansedonia, where we could admire a treasure of hydraulic engineering, the Tagliata. It is a canal that was dug through the stone (tagliata means cut) in order to link Lake Burano to the sea. It dates back to Etruscan times, or maybe even earlier. The Tagliata canal gradually narrows and along its course once there were gates regulating the water flux. According to Pincherle, sea debris flowed along the canal and eventually contributed to form the Feniglia, the perfect barrier for the strategic Harbor of Orbetello, an almost invisible harbor thanks to this strip of land. 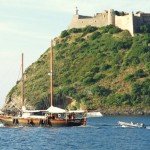 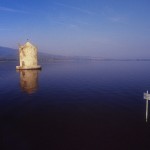 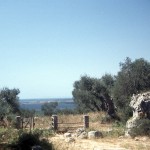 Cosa – The ruined remains of Cosa. by Kathryn McDonnell

What is there in the surroundings of the Tagliata? One of the most suggestive archeological sites we have ever seen, that is the Etruscan village of Cosa and its megalithic walls. Almost no one knows it. According to me (Syusy) it’s not only a beautiful location, but also an important proof of the socioeconomic organization of the Sea Peoples! They used to dig for metal and build their cities inland, while the harbors worked as defensive measures in case of attack. Moreover, natural ad artificial lagoons were their source of fish, wild game and natural resources. The Sea Peoples preferred to settle in stretches of coast nearby an island group. That’s the case of the Argentario promontory and the close islands Giglio and Giannutri, the city of Piombino and the Tuscan Islands, and the Circeo promontory and the Pontine Islands. They all belonged to the Sea Peoples once, a people that certainly needs to be better investigated, given that some archeologists still talk about pre-Romans instead… 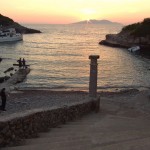 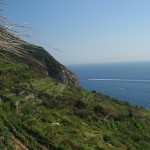 In Orbetello we also visited a magic, yet not very mysterious, place, the Fishermen Cooperative. During the day it is the docking and the warehouse of the fishermen’ boats and in the evening it turns into a real fish festival, with the fishermen cooking delicious seafood. What a piece of art!

Talking of art, when I (Patrizio) arrived in Porto Ercole, in the Argentario peninsula, I found out that Caravaggio, the famous painter, spent his last days here, in a city that was also the set of many wars. I looked for Caravaggio’s tomb but I couldn’t find it. In return, I saw some 14th-15th century walls and towers in a beautiful village with a magnificent natural harbor…