Oil, wine and cured meats in the green heart of Italy

Food has become very fashionable lately: newspapers invariably have an insert of enogastronomy, the exhibitions dedicated to typical products are countless and televisions are full of pans and pots. After all we can’t say that Italian restaurants quality is exceptional for this reason. However food, as tourists, deserves all our respect.

First of all it should be clarified that food is the last ring of a productive chain and of a story that begins in the countryside: on earth. Food is nothing less than the connection between agriculture and tourism and between production and consumption. The “alliance” in the name of territory between tourism and agriculture, that connects farmers, ambientalists, restaurant owners, hotel managers, events promoters and tourists, maybe represents our last positive economic-productive resource. Eventually we can say that enogastronimc tourism is a great idea and really represents a chance to come in contact with a territory: lately “tourists-for-food”or “gluttons-for-accident” are more and more numerous.

The reason is simple. Tourists are interested in exploring the territory. A typical product is, by nature, linked to his territory. Not by chance we speak of DOC and IGP, that is Registered Designation of Origin and Protected Geographical Indication products.

The first rule of product specifications, according to which various excellence products are prepared, is always to explain to which territory they are strictly linked. The connection is not merely geographic but it must be also historical: connected to a local experience and to a tradition. Then food is History and Geography. But is not enough: farmers are the first responsable of the landscape. In this way food consequently becomes also a matter of environment and talks about life styles.

After all is clear that one person doesn’t travel only to eat: if you visit a place you can also enjoy his museums, his art galleries and his handicraft. In this sense typical product became the file rouge to visit a place. Then food is communication, is the connection between past and present. Furthermore it satisfies our need of experience.

As wine and food itinerary example we could mention a region full of excellence’s products: Umbria. In Norcia’s area the first thing you notice as soon as you cross one of the gates of this ancient village -that is one of most beautiful place of Italy and so of the world- is the exaggerated number of delicatessen selling norcino salami, ham sausage, corallina (an Easter salami), mule ball and palle del nonno (that is spherical cured meat) truffle of Norcia, lonzino and coppiette (that are strips of salted pork).

But first of all, they sell famous Norcia’s ham IGP, that is very good. To transform the meat pork with an extraordinary competence is a nursini’s specific ability, and not by chance. History teaches it. Hereabout in fact, in Preci, there was already a surgeon’s school in 1200. Not far from there, in Sant’ Eutizio‘s Abbey, monks were teaching the medical art. Here the moral: not all people learned and became doctors or surgeons, however the less skilled one in any case became a good butcher… We are in the middle of the Altopiano di Santa Scolastica and Monti Sibillini, still covered with scrub and woods. This set could be, and in part still is, favourable to piggery. In fact pigs were used to eat acorns and berries in semi-wild conditions. Regarding to this there is a project to rescue a local breed of pigs almost extinct. All began with the professor Luciano Giacchè, who by observing some frescoes painted in 1400-1500 around Umbria’s churches and in particularly in Val Nerina, noticed the recurring presence of a specific pig’s breed: the nero cinghiato pig, a relative of the famous Cinta senese also known as Cinturello. What makes this product unique is the production technique handled by the local pork-butchers. Moreover thanks to Monti Sibillini there is the typical dry air that ages the product and makes it strongly linked to Norcia, Preci, Cascia, Monteleone and Poggiodomo‘s municipalities. This is why gastronomy is deeply connected with history, art and geography.

This is the region of nothing less than Central Appennino’s IGP White calf: we are talking about big steers, between 12 and 24 months, whose breed is rigorously Marchigian, and above all Chianina (the classic meat of the fiorentina’s beef). The livestock is regulated by severe product specifications: the weaning is only with maternal milk, and then nutrition only with local essences produced by farms. In Umbria, moreover, was born an “industrial” alliance between breeders and restaurant owners: tourists can find on many restaurant’s doors the stamp that guarantees the traceability and the quality of the meat.

In Umbria there are many other products. Truffle apart, there is -for example- Castelluccio, an unique and magic place, full of colours in Spring. In Summer it looks like a Mongolian desert and in Winter an alpin glacier, famous for his lentils. After the lentil’s harvest the earth becomes collective, covered with flock of sheeps grazing. 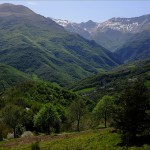 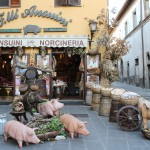 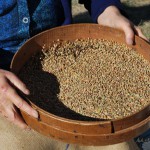 Umbria DOP oil is the only one that occupies the territory of a whole region. Here olives generally grow up at a medium-height of 300-600 meters, along sunny hills, with an irregular and stony terrain. The climate is windy, then without the humidity that could allow the birth of parasites. Thanks to this it’s possible a production with biological methods.

The Moraiolo olive produces an exquisite oil, spicy and slightly bitter. On the foreign market can be sold also at more then 30 euros for liter. DOP product specifications are severe: harvest is by hands, and olives must be treated just after the harvest. Furthermore this oil seems to have a large polyphenol concentration: antioxidants that contrast the ageing. But the most interesting aspect is that the Umbrians have found the way to make their oil the main theme of the whole area: oil is an excuse to taste the territory and to understand his production and agricultural traditions. They invented oil road and open oil mills, an event that involves 23 farms, 24 oil mills and 27 accommodating structures. In November tourists can pick olives, be present at the pressing and at the preparation of the oil. They can also taste it and buy it. Last year there were 100.000 visitors. Then, naturally, you can visit the ancient towns, go trekking, know handicraft etc. In other words, you have the famous “experience”, that is exactly the opposite of a passive and boring holiday.

In Umbria, however, you don’t only eat bruschetta and oil. Of course there also is wine. In Umbria, like in other regions, there are many wine roads. Sagrantino road is the better one. In fact Sagrantino links an unique and excellent product to a story and to an amazing landscape. In the long history of Sagrantino the Augustinian monastery of Santa Clara has played an important role. In his garden is conserved a 160 years old Sagrantino vineyard. Who is a connoisseur of wine and vineyards knows that in the end of 800 a disease called Fillossera destroyed all vineyards in Europe.

Our wine’s tradition was saved by American vineyards in which were grafted ours. So the monastery’s vineyard is an extraordinary case in which survived an ungrafted vineyard that allowed the Sagrantino culture to reborn. You can’t avoid to go inside the monastery, where there seems to be a painting of Giotto. Furthermore in Pieve di San Fortunato or in the museum complex of San Francesco there are some of the paintings of Benozzo Gozzoli, a painter born near Florence in 1420. In his canvases -commissioned from Fra Jacopo da Montefalco- he represents the agricultural landscape of that age and allows to believe that the Sagrantino vineyard was cultivated here from ancient times.

Sagrantino’s purity is produced only in a particular area of 700 hectares between Montefalco, Bevagna, Gualdo, Giano, Castel Ritaldi, where terrain is clay (De Ruta ceramics coincidentally are produced in this area). But the most important elements are the wind that dries and prevents the illness of vineyards, and the temperate climate, allowed by the surrounding mountains. This is why Sagrantino’s grapes are tardive and matures in late November.

The Sagrantino, which is a difficult wine, harsh and with a wild taste when it’s young, seemed disappeared in the 60’s. Afterwards oenologists found the way to mitigate it by aging it in barrels for 4 or 5 years. The Sagrantino bursted in 1979, conquered the DOC and in 1992 even the DOCG (Controlled and Guaranteed Denomination of Origin). It became fashionable. Experts say that, by drinking Sagrantino, you can taste spices, black pepper, lavender and dried flowers. It surely smells wonderful, it has an intense red colour and after half glass you are done, because is very alcohlic. 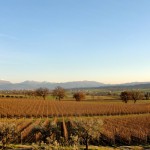 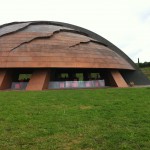 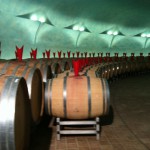 A matter of balance

The point is that the alliance between tourism and agriculture benefits them both, and under some aspects modified the agriculture itself. In fact farms are changed: they discovered other collateral activities (like Sagrantino grape jellies or olive oil cosmetics), they improved the reception and became polyfunctional companies. Farmers have also discovered the communication and have began to tell about themselves. In fact the PSR (Rural Development Plan, with local and european capital) supports with free grant contributions the tasting structures, both in cellars and oil mills. In this way the agriculture becomes the protagonist, marginal areas are recovered, the occupation raises and increases the social vivacity of cities nearly abandoned. But why all this happens in Umbria? Already in 1990 The New York Times considered Todi as the most liveable city in the world, according to a University of Kentucky’s research. And the reason was “thanks to the balance between agriculture, art, culture, nutrition”.

This is what tourists want after all, especially if the main theme of our trip is food, from earth to the table.