Slow tour through the villages of Valtellina

The town of Caspano is small and worth the drive. The village was established by a Milan noble – with the surnname Paravicini – in 1250 to escape the war between the Guelphs and Ghibellines which had robbed him of his possessions and sense of well-being. He came with all he could carry and one servant. He built a palace – Villa Paravicini which still stands – and endowed the town with its clean air, sweet water, and a pleasant climate – not to mention freedom from war. People came here for the summers and still do. The church – Saint Bartholomew the Apostle – has a patron who was martyred in Armenia in the 1st century AD by being flayed – skinned alive then crucified upside down for his faith. There is a painting of him standing with the sword that skinned him and his hide! The Catholics are so gory in their taste for martyrs. The basilica is magnificent and really quite something for the size of the town – about 200 people. It has a covered veranda filled with the tombs of ancient nobles and is possessed of a vista to die for!! Gianni, the keeper, gave me the complete tour of the church which included telling me about the German Protestants who were cast from the stone wall of the basilica veranda for desecrating a crucifix, and he took me behind the altar to show me a hand-carved, 15th century Stations of the Cross. The church of San Bartolomeo is from the 1300’s and the present church is from the 1600’s with artwork from all the centuries. 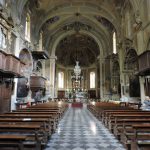 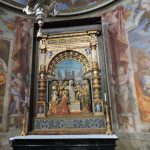 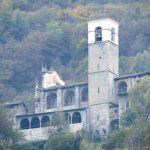 The buildings in Morbegno are tall and the streets are narrow and I could not find the Basilica. So I climbed to the top of a hill in the neighborhood – the beginning of a mountain walk to a shrine. When I got to the top this is what I saw! Gorgeous colorful building! What a center city. This is a small town – about 11,000 people. It is ancient but it seems that most of these buildings were built in the 16th and 17th century. Morbegno – View of the Basilica of Saint John the Baptist.

Just a bit of history – Morbegno was first established in the 8th century according to documents of questionable authenticity. Those who have the expertise to research the Italian history of the cities of the Valtellina valley place the conclusive date in the 11th century. However, the city at the time did not have what we would know as a cohesive city center. For Morbegno, that did not come about until the end of the 12th century when the town moved to a healthier environment on the banks of the Bitto River – a short – 16km – ‘torrente’ that flows in the Adda river. view of Morbegno and the River Adda from a walk.

Although I found no signs directing me to historical points of interest,  it was clear from the beauty of old narrow streets and buildings that one would encounter many artifacts worth viewing just by strolling down the stone paved via’s. Morbegno’s  participates in the non-profit, Swedish organization ‘The Natural Step’. Morbegno is a pilot city in Italy for this project and for an Italian strategic planning model for sustainability in the future. The projects are called Morbegno 2020.

The Basilica of Saint John the Baptist is a 17th century church that has an astounding baroque facade and many altars of exceptional beauty. It is currently undergoing restoration but the ever practical and accommodating Italians have blocked off the restoration workings in order to allow the faithful access – such as the older man whom I saw walk up to the altar, kneel, kiss the railing, and pray – and us tourists of course. Morbegno – the Basilica of Saint John the Baptist

Morbegno was prosperous since it involved itself in the growing of silkworms after the plague and eventually was central to the silk industry in this area. The people of Morbegno planted many Mulberry trees the leaves of which are used to feed silkworms. Growing silkworms was a common cottage industry in this valley and the mountains. Once cocooned, the worms are killed in hot water. The thread is then harvested by hand and then woven. Many homes had small looms in them. Saint Job is the patron saint of silkworms. Many homes have dedications to him on them.

The sculptures of Angelo Gabriele Fierro in Dossa

Dossa is a tiny locality just above Morbegno. One can drive the road to Dossa but the sign I read indicated travel was restricted to residents and those with a permit. But if you drive then you will miss the reason for this post – the incredible sculpture of septuagenarian artist Angelo Gabriele Fierro that decorates the path to the small and picturesque village. Dossa, the walk to the village

Angelo Gabriele Fierro is a sculptor – an artist – and an art historian and critic. He was born in Cervenara in the province of Avellino in Campania in 1941. This is very close to Naples in southern Italy. He currently resides and has a workshop in Morbegno and that is clearly my good fortune! Fierro is highly educated in the criticism and history of art and – as his works demonstrate – he is an exceptional interpreter in stone of Christian mythology. 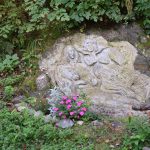 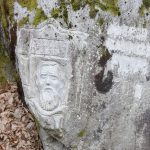 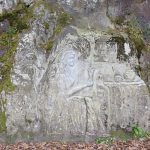 Using the ordinary materials of the forest at his disposal he carefully chose each location for its beauty and natural advantage for the eyes. The use of nature to impassion the religious theme of his artwork is brilliant. The message of his work is bold and demands our careful contemplation. He is a fisherman with a tasty hook! What a treat that walk was! I had no such expectations of art in the woods. If you come to Lombardy I recommend this walk.

Civo was a delightful surprise. I had not ever visited the small mountain towns above my hometowns of Cosio Valtellino and Regoledo, and they offered a pleasant way to spend a day exploring while being close to Pescate where I was staying. I was used to driving up a steep and winding and narrow road and reaching a mountainside town that offered great views but would have caused one to have a heart attack if one was out of shape and deigned to walk around. I was shocked to find broad open spaces which were being farmed for hay and corn. The town had wide streets, a huge parish church, and a fantastic rural walking area that led to the famous Cincett. Considering that there are only 1,112 inhabitants, the splendor of the town, the well-maintained natural area with Cincett, and the large, opulent parish church was unexpected. What a pleasure! I was so so pleased to have made the climb to Civo. The views were fabulous and the walk on the woodland path to the Cincett could not have been more beautiful. The atmosphere was pastoral and serene. This would by a lovely place for a quiet vacation.

Cosio Valtellino, a small village in the alpine valley

My visit would not be complete without a farewell to Cosio Valtellino my official Italian hometown and the town my newly married paternal grandparents called home in 1899! Cosio is a small village of about 900 people in the alpine valley of the province of Sondrio and it is ancient, being first referred to in a deed of sale in 968 A.D. Because it borders Regoledo with a church established in the 5th century, we can guess that Cosio is much older still. Cosio joined the kingdom of Italy in 1861. Cosio is famous for its Bitto cheese, local dairy products, and the confections of the Galbusera company which makes biscotti and other similar confections. The delicious scent of the baking cookies is everywhere in the air around Cosio. The beautiful Church of Saint Martin was being restored when I visited and I was lucky to be able to enter and take some photos. This is an ancient church the first stone of which was laid in 1158. I supposed prior to that the locals would have walked the scant 1/4 mile to Regoledo to the even older Church of Saint Ambrose. Cosio Valtellino – Church of Saint Martin – the center of the village

Cosio was for hundreds of years the most important town in the Valtellina. When the course of the River Adda changed in the middle ages, the fortunes of Cosio left with the healthful waters. The remaining swamp-land became malarial and the population suffered. Recovery was slow and the village did not regain its economic health until the 17th century only then to suffer again from territorial conflicts between powerful families.

Now the village architecture reflects its 17th and 18th century history. The town is old and many of the families – mine included – still live in the old stone and wood homes built when the silk worm – baco da seta – brought jobs and prosperity to the lake area and the Valtellina, and a silk factory to Morbegno – the town that borders Cosio to the east. Como – 31 miles away – stills produces 80% of the silk sold in Italy and 70% of the silk sold in Europe and the towns of the valleys surrounding the lake still grow the Mulberry tree – the leaves of which are the only food that goads the silkworm to produce the cherished thread.