Rovereto: the small towns of Ala and Castel Noarna

Artisan wine, food and traditions of the Alps

Coming out of Rovereto train station, I couldn’t help but notice how clean the place seemed to be. The air was fresh under the iron sky, and cars drove in an orderly way down well-kept streets, lined by flowerbeds and trees. In the distance I could see mountains, adding to the ‘Northern’ character of the place. After a short while I met the rest of the group and Chiara Bille from the local tourist agency Visit Rovereto, and set off towards our hotel. Within five minutes we had arrived at Nerocubo, a modern 4-star place with everything that entails: stylish rooms, a ‘wellness’ spa, and a ridiculously large selection of different sized towels and pillows. More interesting than the pillows, however, was the art. Each one of the hotel’s eight floors is dedicated to an individual, contemporary artist, whose original works adorn the corridors and every room; mine had a piece by Cuban artist Diango Hernandez.

The town of Ala

Having dropped off our stuff we piled into the minibus to head to our first destination, the small town of Ala, about 10 miles to the South of Rovereto. We were met in the main piazza (piazza San Giovanni) by a group nonchalantly standing around in eighteenth-century costume. After a few moments they introduced themselves as volunteers from the “Associazione Culturale Vellutai Città di Ala“, a local group dedicated to maintaining and promoting the history of Ala. Remaining in character, they began to share with us this history as we gazed around at the baroque architecture of the small piazza; they informed us how Ala became a centre for velvet production during the 18th century, and attracted Mozart as place of rest during his travels down through Italy. 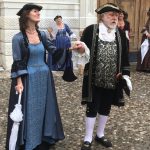 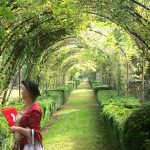 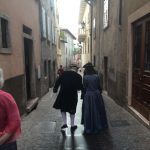 All around Ala, Rovereto

After this brief introduction, they led us into the nearby palazzo Malfatti-Azzolini, a well-preserved building in neo-classical style that once served as the residence of one of the town’s most powerful noble families. Our costumed guides took us through the palazzo, which seems to have changed little through the centuries, pointing out its many frescoes and particularities. They also showed us the stables, in which the smell of leather still hangs, and the pristine gardens of the house, where immaculately pedicured lawns separate flowerbeds and ancient trees. The evocation of past times was continued by our guides as they led us to a grandiose reception room, replete with original furnishings and chandelier, to listen to a short concert by three young flute players in 18th century costume. Sitting in such a place, surrounded by the enthusiastic volunteers from the historic association, it was difficult not to feel some connection to the past. 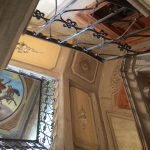 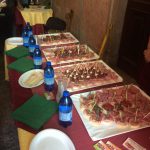 Our tour of the town then progressed as we wound our way through cobbled, snaking streets, stopping at a number various points of interest and historically significant buildings. I noticed on many of these buildings the image of a wing, which forms part of the town’s coat of arms and from where the town derives it’s name (ala means wing in Italian). At the conclusion of the tour I was pleased to find out that we had a generous aperitivo waiting for us, made up entirely of local products. Amongst the many wines being offered was a soft, smooth marzemino made by the local Martinelli family; over the next few days we would learn that marzemino is perhaps the most typical red wine of this area. Alongside the many local wines was a selection of cured and raw meats from local butcher Gabriele Moschini. Keeping in line with the town’s reputation as ‘città di velluto’ (city of velvet), Gabriele has produced a ‘carpaccio velluto’ (very thinly-sliced raw beef) that was so soft as to almost disintegrate in the mouth. When I had satisfied myself with what felt like half a cow, I was told we were then due to move on for dinner; this was going to be an eating marathon.

Dinner was not going to be at a typical restaurant. After a short drive away from Ala up into the mountains we arrived at Castel Noarna, perched above the valley. As the sun was setting we walked though the main gate of the castle and were met by Fausto Zani, its current owner, who handed us some of the castle’s homemade wine. With a short outline of the castle’s long history (the oldest parts date back to the 11th century), Fausto took us into the castle to show us how this artisan wine is produced, taking us into a cellar storing about 7,000 bottles. Along the way he made sure to point out some of the graffiti that had accumulated on the walls of the castle across the years; the oldest etchings dated from the 15th century, and gave an indication to the area’s status as a mixing pot for Italian dialects. Soon it was time to eat again. We were led into a banquet room with a large open fire and a long, candlelit table. For the second time of the day, it felt again as though we had been taken back in time. As the night progressed we drank various wines made from the vineyards of the castle and ate local meats, cheeses, and pasta. After perhaps overindulging with the wine, we heard a guitar and harpsichord making their way into the room. Two brothers from the local town came in, singing typical songs from the area; the one that seemed to rouse the most enthusiasm from everyone around the table was the anthem of Trentino, a popular song from this Alpine region. 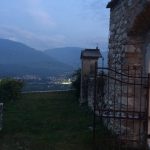 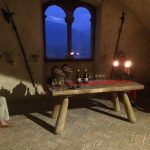 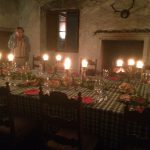 Full to bursting-point with wine and food, and with local songs still in our heads, it was time for us to head back to the hotel and rest before the next eventful day.

For international and transcontinental flights the nearest airport is Verona Airport. From the airport first you have to reach the city centre by bus (rides every 20 minutes, 6€, it takes 15 minutes), then Trenitalia gives you different choises to get to Trento for less than 10€. Otherwise you can choose the Flixbus to Trento, tickets 5€, timing about an hour.

The best way to visit Trento is on foot, but if you prefer you can get the bus. A single ticket costs 1,2€ and it lasts 70 minutes.

Trento is the capital city of Trentino Alto-Adige region, Northern Italy. The most famous monument is the Buonconsiglio castle. Trento is very famous for its charming Christmas markets and if you like skiing the perfect place is Bondone Mountain at just 15 km from the centre of the city. All year round, don’t miss the Science Museum MUSE, especially if you are travelling with children. Another nice place to visit nearby is Rovereto, with a beautiful modern art Museum, the “MArt”.

Accomodation in Trento could be very expensive, especially during Christmas time (high season here!), better to book in advance!