Much more than a transit point, Bergamo is a great city on three levels

For many people Bergamo is just the name of the airport that low-cost airlines use. These airlines call the airport “Milan Bergamo”, giving the impression that it is just the gateway to Milan. Fortunately my two Italian friends took me to Bergamo during a recent visit and it was, without exaggeration, an eye-opener. What I was to discover was a city on three levels with history and monuments which deserve to be better know outside Italy…

The lower part of the city – la città bassa – is modern. The magic begins when you board the funicular railway which takes you up 85 metres in seven minutes to the higher part of town – la città alta.

As happens so often in Italy, some of the most beautiful places are hidden behind quite plain walls. The exterior of the San Michele al Pozzo Bianco church looks nothing special, but when you get inside, the frescoes – some of them 800 years old – are breathtaking. It’s not far from the funicular station but so easy to miss.

La città alta is a busy area with a main street, the via Gombito, full of independent shops and cafés. It’s a good place to stop and try a local speciality, “polenta e osei” – a sweet cake shaped in the form of a bird. 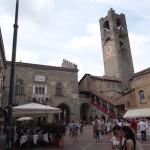 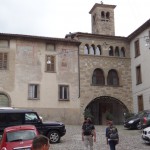 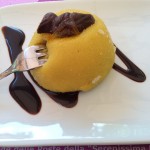 The two main squares of the città alta are so full of medieval buildings that you feel like you have gone back in time. The Piazza Vecchio has the medieval seat of the city administration, il Palazzo della Ragione with its bell tower. Walking under the arch forming part of the Palazzo you arrive in the Piazza Duomo. Facing you is the striking façade of the Basilica Santa Maria Maggiore with the 15th century Colleoni Chapel and the Baptistery nearby. All of this and, of course, the cathedral itself. There is enough just in these two squares to spend hours seeing and it’s a real treat for photographers.

There is so much to see in la città alta and I haven’t even mentioned the Rocca fortress, the Citadel museums or the Donizetti museum. However, thanks to our friends we continued, leaving through a gate bearing the Venetian lion of St Mark, arriving at another funicular station to take us higher again. 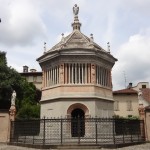 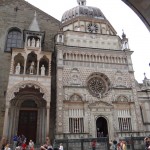 The view from San Vigilio hill

This second funicular takes you up another 90 metres to the San Vigilio hill. It’s much less crowded here and just a short walk to the ruined castle – of which really little remains. That doesn’t matter because the views from the top of San Vigilio hill are amazing. The surrounding countryside, the lower parts of the city and even, in good weather, the foothills of the Alps can be seen from this peaceful spot.

We owe a huge debt of gratitude to our Italian friends – without them we would simply have missed all of this. On other days they helped us discover the cities of Brescia and Cremona as well as their village and the kind hospitality of their family.

Now I no longer regard Bergamo as a transit point and intend to return to discover more about this busy and atmospheric city. It is so easy and cheap to get to with budget airlines that I think my return trip will be quite soon!