We were so excited to see Cremona, famous for music and featured in that fabulous independent movie from 1998 that won the academy award for Best Original Music “The Red Violin”! Window of a tourist office in Cremona

Antonio Stradivari and the Violin Museum

Cremona was home to Antonio Stradivari (1644-1737), the most famous maker of violins whose stringed instruments from his Golden Period fetch many millions of dollars. These violins were known for their sound and beauty. This was a time that Antonio forwent the yellow varnish favored by his teacher Amati – and created his own darker, richer varnish. Antonio Stradivari and the house of Stradivari that he founded made many stringed instruments – violins, violas, cellos, guitars, mandolins, viola da gamba. And – he made the bows which allow the player to produce the sounds that we pay dearly to hear.

Antonio Stradivari – who made his first violin at age 16- was the apprentice of the great violin maker Nicola Amati (1596-1684). Nicola was the grandson of the patriarch of the Amati violin family – Andrea Amati (1505-1578) and the son of Girolamo Amati (1551-1630) one of the famous Amati brothers the other being Antonio Amati (1537-1607). Andrea Guarneri (1626-1698), the first of the Guarneri family of violin makers also apprenticed to the renowned Nicola Amati. 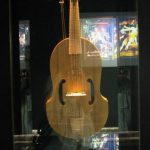 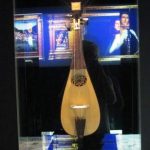 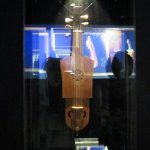 Cremona was home to all the famous dead luthiers – the maestri of the art unequaled, it is the city that houses the astounding Museo de Violino (Violin museum) – which we visited to our utter delight since it was filled with old and new violins, violas, violin cellos, and, in 1938, it established The International School of Violin Makers of Cremona. The schoolhouses the Antonio Stradivari Museum which features the tools and forms and patterns he used to create. One can actually read his writing on these artifacts. He has lovely script. Should we be surprised! Just FYI – the violins of Stradivari were made of two kinds of wood – spruce for the face and maple for the back, neck, and scroll.

We spent our time in the center of Cremona – the old city – and the three events of our visit were a visit to the violin museum – we were awestruck – a tour of the Duomo of Cremona – dedicated to the Assumption of the Blessed Virgin, and, finally, a run up the 502 steps of the Torrazzo di Cremona. This is the bell tower of the Duomo. The tower is approximately 113 meters or 344 feet. The building of the tower began in 754 and it was completed with the addition of a marble spire in 1309. Cremona – Doumo – Church of the Assumption of the Blessed Virgin

We were late to the tower having spent much longer in the violin museum than we anticipated. The tower custodian who sold us our tickets, wished us a good race up the tower steps. We had less than 30 minutes and I was determined to make it to the top of the third tallest tower in the world – Torrazzo di Cremona – and the oldest brick structure taller than 100 meters that is still standing! We ran to the top and I kept stopping on the way up to snap photos through the wire covering the tower windows. The last two stories were climbed by a narrow, open, spiral staircase- a dizzying exercise. But it was worth the still sore thigh muscles to stand in the tower and view the entire city of Cremona. The fourth story of the Torrazzo’s has the largest astronomical clock in the world. The clock was built by Francesco and Giovan Battista Divizioli (father and son) between 1583 and 1588. Torrazzo of Cremona – view from the tower

Text and by pics by Virginia Merlini