The Alchemist’s House in Valdenogher

Valdenogher is a little town of the Alpago area, where is the so called Alchemist’s House, a beautiful building dating back to the XVI Century. Nowadays it is a museum, but – as the story goes – an alchemist arrived here maybe from Venice or even Egypt, running away from the Inquisition. The façade is divided into three parts, as 3 is the base number of alchemy. Every part is covered with symbols: first the symbol of the caduceus, similar to the DNA double helix. Then the grapevine, the three of life, which produces the perfect fruit and grows in two vases representing Nature and Alchemy. Finally, above the central window there is a hermaphroditic image, the perfect synthesis of man and woman.

Inside the house, there are three floors – again -. They represent the Matter which was first decomposed, then purified and at last transformed. The alchemist’s furnace was used for the matter transformation. Alchemists actually were eclectic scientists, who wanted to revert the matter to its previous state, in order to discover the secret of its genesis. Modern scientists of Geneva’s CERN are interested in the same process, actually!

The biological milk of San Martino

Here in the Alpago area I’ve also learned something more about the local production of milk. Mirko, the owner of a 90 hectares farm on the Cansiglio plateau, is one of the few breeders remained. Together with six other farmers, he joined a Social Cooperative producing biological milk and different kinds of cheese. All these products are strictly connected to the area since the pasture is local and the distribution takes place only at local level. They sell their dairy products only to the local stores and to the tourists. The shortest production chain ever: products are brought from the land to the consumers, with just a few steps in between. 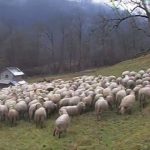 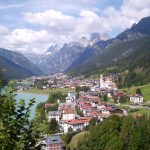 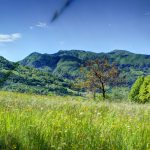 In the little town of Chies, I visited the old dairy with the retired master Osvaldo (if you happen to know Italian, the lateria, with one T only, instead of the correct form latteria). It is a social cheese factory, that stopped working some time ago. Every family of the Alpago area used to have a few cows, producing more or less 15 to 20 litres of milk a day. Not that much, considering that one single dairy cow now produces twice the amount. Thereafter each family was entitled to receive a percentage of the produce – butter, cheese or ricotta -.

The old dairy factory is still there. You can see the old water system, used to churn the butter, the copper boiler, the molds for the butter and the containers for the milk. Osvaldo guided me inside, explaining how butter, cream and cheese were produced… Until some years ago, primary school classes came here to learn all about it and students were enthusiastic afterwards. Unfortunately, they don’t come any more. Such a pity, they are missing a worthy lesson!