Aliano and Craco, the ‘hidden’ Basilicata

Aliano is the village of “Christ Stopped at Eboli”, Craco a unique scenographic ghost town

Everyone knows Matera and its famous Sassi, but nearby there are many other interesting places to discover… What about Aliano? A small village where live only 1.000 people, spreaded on a land of 100 sq kms. Definitely a very low density, with an average 11 people per sq km. Aliano is quite tiny and anonymous, but the Italian writer Carlo Levi was imprisoned here between 1935 and ’36, for his fight against Fascism. He wrote the famous novel “Cristo si è fermato a Eboli” (i.e. Christ Stopped at Eboli, 1945) and he was more than just a writer, he was a doctor, a painter, a man of culture… Carlo Levi’s life inspired some touristic and cultural routes around Aliano. Aliano is 94 km far from Matera, coming towards first you find the badlands. Levi used to say: “The endless expanse of dry clay, without a sign of human life, waving under the sun as far as eyes could see, far away, far away, they could melt in the white sky”. It is an amazing place, it looks like the Cappadocia in Turkey. The same geological context: a clay soil with water flowing on, digging deep grooves. Then the sun burns and creates some kind of wrinkles on the ground, where the water can infiltrate. It ends turning into many sharp and bare ridges, like a moonscape, charming and empty, where just the goats can graze. Around the badlands, there is some fertile land: these are flat expanses where only arable crops and some olive groves can rise, useful to get just a few olive oil. That’s all with agriculture, but many tourists come to visit this unique land. During the Summer the weather is too hot, while when it rains everywhere gets slippery for the thin layer of salt. Such a fragile environment. 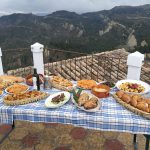 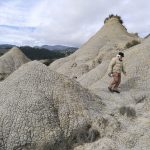 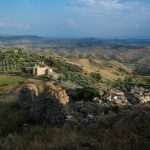 The village of Aliano is perched on the badlands, just like an island in a sea made of clay. Next to the village, an awful but fascinating cliff called “Fossa del Carabiniere” (i.e. policeman’s grave) because once some bandits pulled one Carabiniere down. Once in here, visit Carlo Levi’s house and museum and look for the monument and all the murals dedicated to him. In 1979 his novel became also a famous movie directed by Francesco Rosi: it was filmed here but the most charming scenarios belong to a tiny hamlet nearby called Craco. Craco is a unique place, a ghost city, totally abandoned. Some kind of previous century rural Pompeii. Visiting is possible only through a guided tour. Once it was important, confirmed by a Norman Tower from 1040, a convent from 1630, the ruins of St Nicholas’ church. During the Angevin times, Craco spent a lot in taxes according to registers, that means it had to be a rich town. 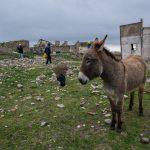 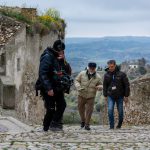 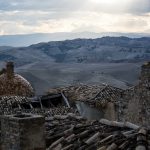 By the end of ‘800, it had more than 2.000 inhabitants and the local friars used to run a famous research centre about agriculture. In 1963 everything collapsed, literally. The most ancient buildings were built on the rocks, but then the whole village widened even on the clay lands. After several landslides, the water supply system broke and the modern buildings were far too heavy for the underneath soil. The village flooded and got abandoned. Today it is really spooky, fascinating and unique: turned into a scenography park museum, nowadays it is a touristic highlight visited by many people from all over the world and often used as a location for movies shooting. It is a long list: from King David with Richard Gere to Ninfa Plebea by Lina Werthmuller, from 007 Quantum of Solace with Daniel Craig to the last scene of The Passion by Mel Gibson, Judas’ suicide.