Venice in a day

What is slower than visiting Venice, the city where you can only walk, or, at most, take a boat? We have decided to have a one day tour in this amazing city, enjoying its way of life, its food and the many draws you can find here.

Still in the train, we notice we are approaching Venice when the lagoon appears on the horizon. We are on the Ponte della Libertà (Freedom Bridge), in some minutes we are there!

Venice Santa Lucia train station welcomes us with a jaw-dropping view of the Grand Canal and we immediately have the feeling that we are in some place far away from Italy, from everything we know… Expecting a long walking we decide to recharge our batteries in a very Venetian way, that is at a local bacareto. In Campo dei Tolentini there is this sort of small bar that sells glasses of wine and sandwiches for few euros. There are no seats, just two barrels that serve as tables outside. Never mind, the campo is almost empty, we can seat on the stairs or on the bank and enjoy the view and the sun.

Ready to go, we realize that directions are not going to be a problem, we just have to follow the crowd. And pretty soon we start seeing signs on the walls that say ‘Rialto’ and ‘San Marco’. Now the calli (Venetian for this kind of streets) are getting very narrow. But we are not afraid of getting lost in a city surrounded by water… On the contrary, the chance to lose the way in this wonderful maze is fascinating. This city that emerged from the water is really magic!

The street that leads to the Rialto Bridge is crowded with stalls and shops that sell everything, from souvenirs and clothing to food and drink. They are so colorful and picturesque that I wish I could buy everything. We realize we have reached the Rialto Bridge earlier than expected. The view is amazing either you look at the bridge from the bank or you look at the Grand Canal from the bridge. And finally there they are: the gondoliers of Venice! The Rialto Bridge is the oldest one among the four bridges that span the canal. It consists of an inner staircase, which houses several shops, and two panoramic staircases on both the outer sides. The Grand Canal makes a large S shape dividing the city into two parts. In fact six districts (called sestieri) form Venice.

Once we have bridged Rialto we continue on the crowded calli following the sign ‘San Marco’. On these very narrow calli it feels like we are taking part in a procession. As if we were one single stream and we were going to flow into a huge space, St. Mark’s Square. view of the Grand Canal from the Rialto Bridge

St. Mark’s Square is considered one of the most beautiful squares in the world for a reason. It is simply breath-taking. The architectures match perfectly with each other, despite the difference in style. We cannot help but wander across the square admiring every inch of it, wondering about its history. We are at the very heart of this gigantic fish. Indeed St. Mark’s Square has always been the political, social and religious centre of the city. Perhaps it was Napoleon himself who called it “the drawing room of Europe”.

A long queue is waiting at the entrance of the Saint Mark’s Basilica. Never mind, while waiting we can admire the buildings around us. We notice immediately the two colums carrying the statues of Saint Theodore and a winged lion, symbols of Venice. On the left side of them we can admire the magnificent Doge’s Palace, and in front of it there is Sansovino’s Library. But the building that catches our attention is the Campanile, the 98 meters tower that stands out in the square. It has been restorated several times and it even collapsed at the beginning of the 20th century (the only victim was a cat!).

Finally we enter the Basilica, surely the main draw of Venice. It derives its name from the patron of the city, Saint Mark, and still keeps his remains. The atmosphere inside is not as you expect it. In the half-light the golden mosaics are even more fascinating and walking on an uneven floor makes me realize the historical value of the church I am visiting. The wait was definetely worth it. 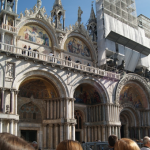 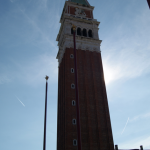 After visiting the Basilica we want to explore the shops hidden under those beautiful porticos. And starting to get hungry, we head toward a delicious Takeaway Pasta, just 5 minutes far from the Basilica.

Full and satisfied, from St. Mark’s Square we reach quickly the Bridge of Sighs (Ponte dei Sospiri), so named because from there convicts saw Venice for the last time, before being imprisoned.

The gondolas on the canal are very tempting now, so we have this crazy idea to take one to reach the Santa Maria della Salute (Saint Mary of Health) Church. The building, facing the Grand Canal, is very impressive. The church was built as a votive offering when Venice was freed from the plague in the 17th century. We learn that every year in November Venetian people still celebrate their Lady of Health here.

Our tour is ending, so heading back to the train station we stop just for a glass of spritz and a tramezzino (a local kind of sandwich), the perfect combination for a very Venetian aperitif, in Campo Santa Margherita.

Leaving this city we feel we have lived something magic, something you can find nowhere else.

The Venice Airport is an international airport. To reach the city centre you can take a bus (it takes 20 minutes and costs 8€) or either a boat to cross the lagoon (15€). The nearest airport for transcontinental flights is the Bologna Airport. From the airport, first you have to reach Bologna Central Station by bus (rides every 15 minutes, it takes 30 minuts, 6€). Then, from the Central Station you can choose between the train and the bus to get to Venice. There are many trains (you can choose between Trenitalia or Italo companies), reaching Venice in 1h 30. Otherwise you can choose Flixbus and get to Venice in 2 hours.

The best way to visit Venice is on foot and across the lagoon and the canals by vaporetto ferry boat (single ticket: 7,5€ for 75 minutes). Check the ACTV website for more.

You may also enjoy a tour on the famous gondole, the typical venetian slim boats floating on the canals led by standing men… why not, just consider that it is a quite expensive tourist experience: a day tour is about 80€, by night about 100€.

Venice is the capital city of Veneto region, North Eastern Italy. No need of introduction, we guess. Venice is one of the Italian symbols worldwide, one of the most iconic place in the world, with tons of imitations, from Far East to Vegas.

The whole lagoon and part of the city are a UNESCO World Heritage Site. Highlights, for sure  Piazza San Marco and the Palazzo Ducale. The canals, of course – Canal Grande on top – with all the romantic bridges crossing them (perfect location for proposals and love swearing, by the way). Read a full itinerary by our US Ambassador Virginia, while here you can find some ideas for a one day tour.

The Venice Lagoon counts up to 118 small islands, see Burano, famous for its colorful houses, and Murano famous for the craft production of glass. Here is a full itinerary touching many of the islands.

Planning your trip, try to be in Venice in February to attend its majestic Carnival celebrations (check Carnevale di Venezia official web site for updates). Check also The Biennale web site for the events of arts & architecture fair and to attend the great Venice Film Festival.

In Venice everything is very expensive, accomodation included. A better choice to save some money would be to sleep in the nearby cities like Mestre or Padua, reaching Venice just for sightseeing.