The first marine natural reserve in Italy, famous for diving and for its lentils eaten by astronauts

Ustica is an island in Sicily famous worldwide for its amazing seabed, rich in underwater landscapes and in fishes. It is the first marine natural reserve in Italy. 15k hectares of protected seabed, 15 km of coasts, divided into different areas of protections: from Punta di Megna to the Torre dello Spalmatore is a total reserve. The island is a paradise of diving, to confirm its reputation in the 70s Ustica was chosen as the place of a big challenge between two great free divers: the French Jacques Mayol and the Italian Enzo Maiorca. 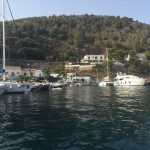 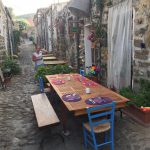 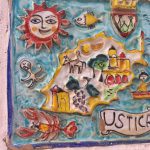 Ustica is twinned with a small planet between Mars and Jupiter called Ustica as well. An other kind of island, lost in space. Our is lost in the Tyrrhenian Sea, 36 miles north than Palermo. From Palermo, it takes two hours and half by boat or 70 minutes by hydrofoil to reach Ustica. The main harbour is really small, Cala Santa Margherita. The centre is very nice, but quite crowded, stuffed with too many cars.

Speaking of history, Ustica represented a strategic place for anyone: the Phoenicians, the Greeks, the Romans, the Saracen pirates. It is known to be the Circe’s island, the one who turned into pigs Ulysses’ friends. The Greeks used to call the island Ostodea, i.e. charnel house, because of the bones of so many castaways. The Romans used to call it Ustum, i.e. burned, for its volcanic nature that makes it similar to Etna mountain or Hawaii islands. The first actual colonization came with the Bourbons, in 1759, by Ferdinand IV. It was a long struggle, against Saracen pirates devastating and threatening the land for years. But after all it ended in an agricultural paradise. The lentils from Ustica

The Italian intellectual Antonio Gramsci was imprisoned here in Ustica for a while during Fascism. He used to mention this place a lot in his letters to his wife and sister-in-law. He mentioned also the local lentils, famous to be the smallest in the world. The lentils from Castelluccio di Norcia in Umbria are slightly bigger and multicolored, while the ones from Ustica are uniform brown. Certified by Slow Food, these lentils are rich in iron, proteins and essential amino acids. You don’t need to soak them in water before cooking, because the peel is extra thin and gentle. Thanks to the rich soil and the Mediterranean weather. Other local products are the fava beans, the chickpeas and the beans. Reason why one of the most famous local dish is the so called macco di fave, made with dried fava beans and wild fennel. Walking across the island, vegetable gardens are all around, from tomatoes to pumpkins. I loved so much the agricultural inland! The island is quite small, less than 9 hectares wide, and it is a real place, with 1200 people actually living there. Tourism is its first aim. 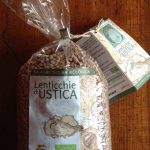 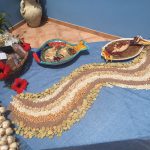 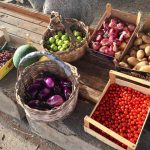 I met Giuseppe, a “pescadino” (in Italian it means a match between a fisherman – pescatore – and a farmer – contadino –). He goes fishing and farms the land either. He opened an agritourism where he hosts many guests and he is a skilled farmer as well. Everything started with a hoe and a donkey, the donkey is still there, Serafino. But nowadays the cultivating of lentils is a bit more automatized, except the harvesting which is still done by hands. It is a gentle matter, to be done in the morning when the plants are still humids. Ustica lentils are so special that NASA included them in the astronauts’ diet.

Ustica has to be visited by boat, you know, exploring its famous marine caves and diving in its seabed. It is not actually a place of sandy beaches, it is much more a sharp rocks island with just a few accessible bays. But what a sunset everyday! Wait for it at the Spalmatore, at the club called Il Faro (i.e. lighthouse), owned by some local musicians, located just on the cliff for the best view.

Palermo has its own international airport connected to the city centre by a bus (rides every 30 minute, many stops in different part of the city, 6€). For transcontinental flights you have to stop in other airports (Rome, for example).

The best way to visit Palermo is on foot. About the public transports, in Palermo you can pick both bus and tram: single ticket 1,4€ for 90 minute ride.

Palermo is the capital city of the region Sicily, a big island in the South of Italy. The long history of the city and the succession of many different civilizations gave it a remarkable artistic and architectural heritage. Italian Capital of Culture in 2018, Palermo is the main seat of the UNESCO World Heritage Site Arab-Norman Palermo and the Cathedral Churches of Cefalù and Monreale. Most of the must-see monuments is located inside the city center; others are distributed throughout the territory of Palermo: historic villas, watch towers, rock paintings, ancient churches or noble palaces. You really should attend the St. Rosalia Festival on Semptember 4th and July 15th, it is a very good experience.

Choose carefully where to sleep. The best areas for tourists are the city centre, Kalsa and Mondello (on the seaside). We should recommend you to avoid some urban areas like Cuba, Zen, Brancaccio, Zisa, Falsomiele, Uditore and Cruillas.