A wild island far from the mainland and from urban routine

Marettimo is the farthest among the Aegadian islands. The harbor is too small for big boats like Adriatica, so we anchor it a bit further.

Marettimo is not the Treasure Island, but certainly is a treasure of an island, in other words is the Mediterranean island par excellence. The village is welcoming and well preserved. In its narrow streets and small squares there are almost no cars. The fishermen sell their catch on the pier, and restaurants and bars welcome you with their traditional coffee or mulberry granita…the best one of the Mediterranean Sea! The number of inhabitants varies depending on seasons. The few residents are outnumbered in summer by tourists, who are in most cases former inhabitants of the island. Indeed during the first decades of the last century, Marettimo paid a high price for emigration. The majority of inhabitants moved to Monterey, in California, to do what they could do best: fishing.

The people of Marettimo are friendly and helpful. In the main square I meet Alberto, who tells me that when he was a child a lot of classmates of his went away for good, that is to say they emigrated with their families. And Alberto shows me a piece of art, of which is very fond: a sword of a swordfish, where an emigrant painted the stages of his troubled journey from the beloved Marettimo to Monterey. It looks like a comic book, or better, the work of a storyteller.

Just a few years ago primary schools closed due to the scarce number of children. Fortunately it was not for long. Residents insisted in reopening them taking for granted that a country can literally die without schools. Not to mention that the transportation costs to reach schools in other islands would be quite high. 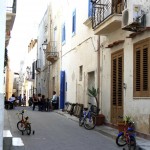 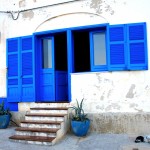 While Patrizio is chatting and eating a Sicilian granita, I, Syusy, meet Vito Vaccaro. He is a big red hair man, basically the reincarnation of Federico II, the Norman king. In fact he’s a forest ranger and a true lover of the history of the island, which is very interesting indeed. He picks me up on his motorbike (almost the only motor vehicle in the whole island) and he brings me to the peak of Mount Falcone. The path is narrow and steep, and it’s surrounded by thyme plants (timo in Italian, that’s maybe why it was named Maret-timo). The landscape is amazing, and you can smell the aroma of rosemary, heather, myrtle and euphoria. There are some ruins of a Monastery and tracks of Roman water works. Above us I can see the summit of Mount Falcone, almost 700 meters high. This mountain has always been good for the island itself, preventing the moisture, and the karst nature of the rocks keeps the island rich in water. Indeed Marettimo has always been considered sacred, thanks to its abundance of water, the most valuable resource for its inhabitants.

Enzo Bevilacqua, an expert of the culture of the island, points out a row of vertical rocks, which recall the menhirs, the standing stones. They are oriented toward the direction of the sunrise. And I don’t think these standing rocks were placed like that at random. They make me think of an archaic cult perhaps, they are a sort of Stonehenge. And it doesn’t sound strange at all. The island has been inhabited ever since the Neolithic. Even the Sea People, who colonized the whole Mediterranean Sea, settled here, that is to say the Phoenicians, the Elymians and the Sicanians. Even the naval combats between Romans and Carthaginians took place here.

Somebody says that Marettimo could have been the real Homeric city of Ithaca (then Vito could be Ulysses). And at the end of the 19th century an English writer and researcher, Samuel Butler, an expert in Homeric books, came here searching for Penelope’s palace… Marettimo is wild: nature is preserved by the Natural Park and Reserve. People here are really proud of their identity. When in Marettimo, please adopt a correct behavior following the Natural Park rules, even if they could be strict. That’s why we ask the locals to show us around. With them we didn’t take the risk to break the rules of the Park and we’ve learned a lot about the island and its nature.

Giovanni Aliotti, known simply as “the Greek” (since there are few family names, everyone has his own nickname), brings us by boat to some areas of the Park, which are forbidden to visit otherwise. As a matter of fact, the locals didn’t consider the Park a valuable resource at first, because of the many limitations on navigation and fishing. But later they understood that preserving it was good for the economic survival of the island.

Speaking of nature, the karst-dolomite rocks make a series of magnificent caves, where the water comes in infinite shades of blue: the Cave of the Camel, the Cave of the Thunder, the Cave of the Nativity and the Cave of the Bombard. Then, the Greek shows us the Cave of the Ficaredda, which in Sicilian dialect is a bad word and for this reason they never mention it in guidebooks… but it’s such a pity, because it’s very beautiful. There are red algae that grow on the water level and mark the waterline of the cave itself. You can also go to the beach from here, but be careful and go only where bathing is permitted. Cala Bianca is sandy, while the others, Cala Nera and Punta Troia, are rocky or pebbly. Fabio is a diving master and he is going underwater with some people of our group. Diving here is not so easy due to the strong currents and you must be accompanied by a guide. The most well-known locations for diving are Punta Bassana, Punta San Simone and Punta Libeccio.

I, Patrizio, like to go diving, but on that occasion I was busy… at the restaurant. However, my friend Sandro – keen on diving – said that the sea bottoms of Marettimo are absolutely amazing. I can only say that the food of Marettimo is deserving as well, especially the food Nadia, Vito’s wife, cooked for us. Beside being one of my weak spots, food is important because it represents the environment, the climate, the traditions and the economy of a country, so it has to be studied! Here the menu offers various kinds of fish, among which white bream, red scorpion fish (here called “onion”), mackerel and sardine, but also lobster pasta (trenette or linguine) and couscous with capers, thyme, rosemary, mint and olives… The Mediterranean diet is definitely a priceless and immaterial treasure for all humanity.