I was on my way to Città della Pieve and got a late start. So I decided to visit a few towns with 15 miles of my apartment instead. None were listed anywhere as worthy of tourism but they looked interesting to me.

Agello was my first stop. I was attracted to it because I could see a prominent castle tower from across the plain. It looked like an old and small walled mountain town. It was – and it was quiet, pretty, and residential. Was it worth a visit? Sure. It had gorgeous doors and two fantastic parks in the Medieval center with scrumptious views of the Umbrian plains. In fact, you can see all the way to Lake Trasimeno – a large lake only slightly smaller than Lake Como – and known as the Lake of Perugia. Agello has only about 800 residents and is an ancient town that dates to the early Roman empire in its foundations. The current walls were built in the 12th century and refortified against war two hundred years later. The name Agello comes from the name and legend of the water nymph Agilla. One beautiful park in town is in the Piazza Agilla and is marked with a maiolica ceramic sign. Agilla was the water nymph living on an island in the lake who captivated Prince Trasimeno – the son of Tirreno – the founding father of the Etruscans. She lured him to the middle of the lake where he drowned. Because his body was never found and Agilla could be heard crying for him when the wind moved across the water, the lake was called Trasimeno in his memory. 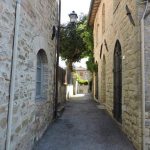 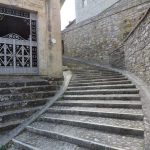 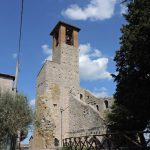 Tower of the 12th century castle

Bettona is a beautiful walled Umbrian hill town. It is old with Etruscan origins preserved under the walls built in the Medieval era before the devastation by the plague. The written town history dates to its mention by the historian Pliny the Elder (AD 23 – AD 79). The drive to Bettona was like a drive to a Lombardian mountain town with the exception of the much lower altitude – 324 meters, the existence of guardrails, and the presence of residential homes from the plain to the great walls. Bettona has a small population of 3500 – another difference from the mountain towns of Lecco, Sondrio, and Como where the populations hovered around 1,000. Bettona – view from the park in the Piazza IV Novembre

My brief walk was focused in the center of town which was bordered by three large churches only one of which was open. A lovely gentleman was kind enough to show me a light that illuminated the inside of the Chiesa de San Francesco e Dell’Orazione – a 12th century church.

The church I did enter had an astounding wood confessional that reminded me of the ticket booths of the circus side shows of my youth. The confessional of the 13th century Chiesa di Collegiate e Santa Maria Maggiore was a formidable and beautiful gatekeeper of the soul where the priests of the past and present collect and dispatch the sins of the faithful. This church has a chapel dedicated to Saint Rita – a wife and mother from the 14th century who became a nun when her husband was killed. She is the patron saint of impossible causes and those causes specifically for which she is known – abused wives and heart-broken women! She is often pictured with a bleeding wound in the center of her forehead – a woman with a hole in her head! The third church – Chiesa di San Crispolto – had an almost Egyptian looking bell tower. This is the church built by monks to preserve the body of the patron saint of Bettona – Saint Crispoldus – who was from Jerusalem and sent to Umbria to preach Christianity to the Romans in the first century AD. Of course – he was arrested, tortured, and killed – a martyr for his faith. 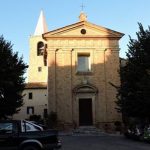 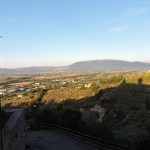 view from the park in the Piazza IV Novembre 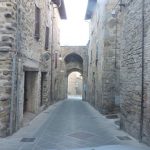 This was clearly not a town for tourists. There were no shops and the only picture-takers I encountered were Italian. The hours of dusk brought the old men to the cafes to smoke and gossip. My walk ended at the local park in the Piazza IV Novembre which offered a beautiful row of Gelso trees and a view of the local plains and the surrounding hills of Umbria.

Spello is an ancient fourth century Roman town built on the east side of Mount Subasio. Assisi is on the west side. It is smaller than Assisi and has no claim to fame other than its current ambiance as a walled village on the top of an Umbrian hill. Spello is an ancient walled Roman town. There are still three old Roman gates to be seen – Porta Consolare, Porta di Venere and the Porta dell’Arce – the Arch of Augustus. I entered by the Porta Consolare – a huge gate with a tower topped by an olive tree. Where Lombardy has Gelso trees for the silkworm, Umbria has olive trees for olive oil. Spello is small and has many churches. The village has a true Medieval flavor and it is clean, friendly, and really quaint. 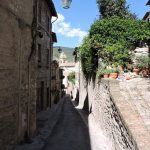 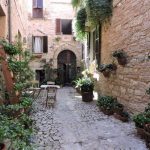 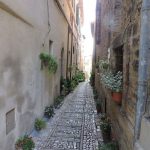 There is an international airport in Perugia, connected to the centre of the city by a bus line (tickest 2,5€ – or 3,5€ if you buy it on board-). For transcontinental flights you have to stop in other airports and get to Perugia either by train or by car.

The best way to visit Perugia is by walking, but if you are interested in using the public transports check the Busitalia website. If you reach the city by car or by train, you can climb up to the city centre – which is located quite high! – using some free escalators leading straight inside the Rocca Paolina. Leave your car in one of the big parking places ‘downstairs’ (ask for some special parking rates to your hotel, they often offer some discounts!).

Perugia is the capital city of Umbria region, in the very heart of Italy. Go sightseeing in the city centre, it is famous for the defensive wall all around, the great Rocca Paolina and Palazzo Priori that contains a very important collection of works of Umbrian art.

If you love chocolate, Perugia is the hometown of the famous chocolate factory Perugina, where you can also take some nice class at the “school of chocolate” and then sleep in the Choco Hotel.  Consider also a tour through the charming villages near Perugia, we recommend you to visit Agello, Bettona and Spello!