Cittadella, Bassano del Grappa and Marostica will surprise you

Discover that your surroundings are much better than you expected is one of the best satisfactions for a travel lover. Some weeks ago -it was not spring yet- we decided to explore carefully some villages of my region, the Veneto region.

It was late morning when we arrived in Cittadella, whose peculiarity are its medieval walls that are still intact and that can be visited! This patrol path of 1,5 km starts from the tower of Porta Bassano. It was sunny enough to see the snow on the surrounding mountains and enjoy even more the Middle Age walk! The best view is from the Tower of Malta, which also houses a small museum. The whole path and the towers are extremely well kept. 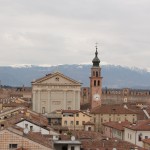 Cittadella, view from the Tower of Malta


Back on the road, our following stop was Bassano del Grappa! But since was lunch time we headed toward an agriturismo – the whole area is full of agriturismi- where we enjoyed a very simple lunch made of products cultivated by themselves. The owner was very kind and happy to give us directions.
Bassano del Grappa is a renowed town since the incredible defeat that the invaders suffered in 1917-18, during the first world war. The whole area, and especially the Mount Grappa, is still an open-air museum to remember and honour all the soldiers dead in battle.

In Bassano, you can admire a breath-taking view of the Mount Grappa and the whole area that stars from the famous Ponte degli Alpini, which is the symbol of the village. If you want to discover more about it, the perfect place is the Museo degli Alpini, located just after the bridge. In front of the museum, you can see the statue of a young alpine trooper kissing his girlfriend, a scene taken from a popular alpine song. In order to have a nice view of the bridge, I suggest to walk along via del Macello or via del Tabacco. One last thing if you visit Bassano: you must try the grappa on site. There are many shops that sell it and I have never seen so many variations. Anyway, if it’s your first time here, I suggest you to try the tagliatella, a local liquor made of grappa. 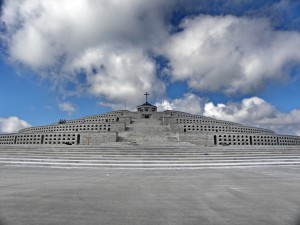 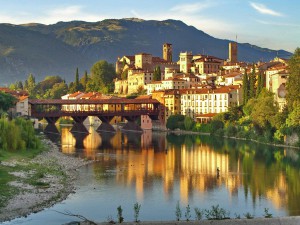 The last destination of our tour was Marostica. You may have heard of it: Marostica is famous for a very special tradition, that is the human chess game. While you approach it, you will see first the upper castle on the top of a hill and the walls that connect it to the lower Castle, which stands at the beginning of the village. We parked nearby, and as soon as we entered the Castle we saw immediately the famous Piazza degli Scacchi, where the first chess game took place in the 15th century and the winner got to marry the Lady of the castle, Lionora.

Now the square is the heart of the village, with many bars and shops all around it. We passed the porches and started to walk uphill until we reached the beginning of the Carmini Path, which brought us up to the upper castle. The walk was very quiet. I guess only the brave dare to do it because it’s steep – but it’s all in nature. Finally, we got to the top of the hill, and we climbed the only accessible wall, enjoying a stunning view over the valley.