Once you visited the house where Giuseppe Verdi was born at Roncole Verdi (Parma), come to the village of Sant’Agata (towards Piacenza) to visit his adult house Villa Verdi, where he lived for 50 years. Sant’Agata is in the middle of the countryside and the Villa is not easy to get or even see! The Maestro was quite unsociable and he planted so many shrubs and trees just to hide himself and protect his privacy… But even today, we don’t leave him in peace!

The house is a museum, where you can visit all the original rooms, included the Maestro’s bedroom with the bed he died in, the table where he composed and the piano he used to play. The villa is full of interesting mementos and curiosities, for example a collection of ancient carriages. You know, Giuseppe Verdi used to get up early in the morning – at 4 a.m. they say! – and drove his carriage round through his land, just checking what there was to check. Oh boy, he loved his land!

Verdi may have been a farmer, but he remained an artist and he conceived for his property a great scenography. For example, there are many interesting trees in the garden, coming from far away and planted directly by the Master himself… Included a banana tree, could you imagine? In the Pianura Padana (i.e. flat land padana).

Giuseppe Verdi created his own mini-Paradise and his memory is still alive in here! 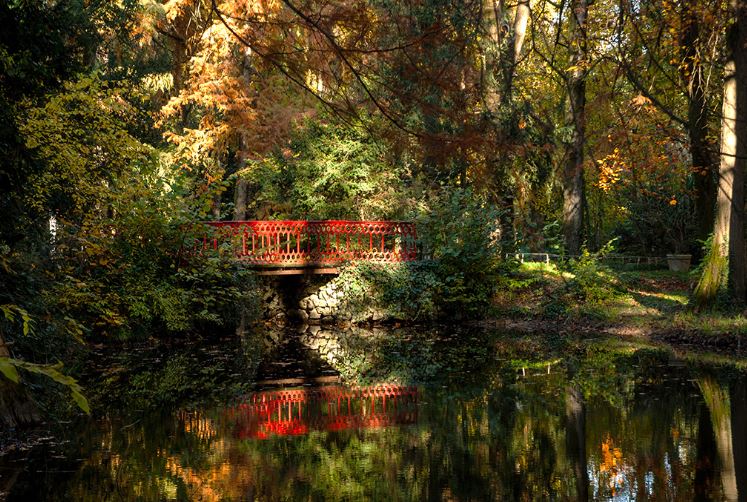 After the house where he was born, this is where the adult Verdi, rich and famous, lived
We are in Sant’Agata, in the middle of the countryside
The land Verdi so deeply loved
This is his house
It’s not easy to get to or even see
The Maestro was quite unsociable
He didn’t want anyone to see him
He planted these shrubs and trees so that people would leave him in peace
But even today, we don’t leave him in peace!

This is the entrance to the museum part of the home
The part tourists can visit
It opens directly into Peppina’s—Giuseppina Strepponi’s—bedroom
Verdi designed this house personally and had it built
He wanted all the bedrooms to have direct access to the outside
With the kind permission of the lady of the house, Giuseppina Strepponi, known as Peppina
With her bed
The Maestro’s bedroom is over there
This is Verdi’s bedroom, and this is his bed
Separate bedrooms for him and Peppina, because he was strange!
At 3 am, if he felt inspired, he would get up and compose
Or at 4 am, he would get up to go into the countryside
This is the table where the Maestro composed
Here’s something nice, although a bit strange, but back then it’s what they did:
A plaster cast of Peppina’s hand
And the plaster cast of the big hand of Peppino, Giuseppe Verdi
Over there is the piano on which the Maestro would play
This is the bed in which Giuseppe Verdi died
He died in Milan, at the Grand Hotel et de Milan, and here the room has been reproduced perfectly
There is even the night shirt he was wearing when he died, as well as the plaster cast of his face and hand

The villa is full of interesting mementos and curiosities
All of the carriages are very important, but there is one in particular that is the most important:
It is very rare a Phaeton
It all ended up in the countryside
It is a special carriage because it was constructed so that the landowner could drive it
In this carriage, the Maestro would make the rounds of his land
In essence, it was his Jeep! He went around the countryside checking what there was to check
Nothing stopped Verdi!
Also because he got up at 4 in the morning …
Before his farmhands …
Here we are in the wine cellar, with the press, the bottling machine, the first vats of wine
Everything was his, it’s authentic
The grounds are filled with statues he acquired following the bankruptcy of the Pallavicino family
Angelo pointed out to me all these points of perspective and sight lines
From the main gate, if I open all the doors and portals
I can see this statue that is straight-ahead on the island
The same thing from the Maestro’s bedroom—you can see the lovely drive that leads to the countryside
Let’s be honest Verdi may have been a farmer, but he remained an artist
He had in mind a scenography of the land
The land as a performance, to his own personal taste
Only a few select friends came here
It’s a thrill to understand the mind of a genius like Verdi through his home
Or at least have fun trying …
There are some very interesting trees
The first we see here is an osage orange that produces unusual fruit
It is a tree that comes from Asia and these were actually planted by Verdi personally
He toured the world and anything he liked in terms of farming or plants he brought back here
For example, this is a banana tree
A banana tree in Sant’Agata! Who could imagine?
The climate isn’t ideal … but he liked it and so he planted it
Today it is preserved in exactly the same way he developed himself,
hay covering the leaves so that water would flow off
Verdi was a collector of plants, of everything
And he created his own mini-Paradise
Verdi is alive and cultivating together with us!