An European locality with 1.000 years of stories and legends!

Friday afternoon, Magda calls me: “Do you know that today, after 1000 years, is going to be opened the Tabiano castle? It is distant only one hour from Milan, and an hour from Bologna. We will meet there! You will see, it’s a wonderful place, worth to be visited. It’s a castle of many years of history and stories, it’s a cultural and gastronomic tourism destination, along the Francigena route. You will see that is really worth to be visited!”

Her invitation can’t be refused. When she is so resolute you can’t avoid to follow her, I know it by experience.

I take the car and I get to Fidenza in almost one hour. I go out from the toll road, I leave the outlet on the right and I start to cross the valley in order to go up to Tabiano. The countryside in Spring is very beautiful, the nature wakes up, the farmers are working hard, in the lands are growing up the first seeds. Tabiano Terme is a fraction of Salsomaggiore Terme municipality, but “fraction” is a reductive epithet, both for its long history and for its sulfurous waters that are among the most appreciated in Europe. The city is full of small hotels that are managed with the typical Emilian ospitality. The Terme of Tabiano began to be used in the ‘800 like a holiday spot of famous Italian artists. Among them stand out Giuseppe Verdi and Giovanni Verga that loved Tabiano, more private than Salsomaggiore. Going up to Tabiano I imagine that all thermal baths developed near the castle could make it lose a bit of its medieval spirit, instead, I’m glad to discover that the “fraction” is divided in two built up areas: Tabiano Bagni, and higher, after 3 km, Tabiano Castello.

Tabiano castello is one of the medieval fortress more scenographic of the high Emilia. The fisrt fortification structures are of the Roman era, but the real castle was born after the 1.000 p.C. as strategic garrison of the Francigena route and to protect the Salsomaggiore salt pan. The castle was the abode of legendary personalities like Oberto il Grande, the first allied of the emperor Federico II, Dolfin, the fratricide of Tancredi, Sun, Star and his doughter Isabella, the Angel of Tabiano, so good and beautiful that the French chavalier Riccardo d’Orange risked his life to come and meet her. The castle rests on a solid spur of rock that appears in some places under the walls. Going up by foot I realize that I’m entering in the history of a place that saw all sort of things: sieges, destructions, conspiracies, betrayals, loves and duels that influenced cities and European nations. I meet Magda, we attend together the opening ceremony and I discover that the castle entered in the association “historical dwelling” and from today is available the tour from May to November, while the ancient burg at the castle’s gates became a charme relais while maintaining the vocation of the ancient farm company of the Corazza family.

Magda introduce me to Cristina “the Castellan” one of the daughter of Prof. Corazza. She manages the Relais organization and the visits to the castle of Tobiano. We chat on the terrace and than we enter in the castle: an uncountable quantity of halls of various styles. In the meantime Cristina tells us the story of her family, an European story. Cristina’s great-grandfathers, from Switzerland her, from Parma him, emigrated to London in ‘800 and found together an economic empire with typical Italian products, in the London of the industrial revolution. The idea was to offer “the restaurant for everyone and not only for the aristocratic class”. The idea became a success and they collected a fortune, but London during the industrial revolution isn’t a healthy city, so, during a holiday in Italy, the newlyweds discovered the castle of Tebiano, and decided to buy it to move with their children and let them grow up in a healthy and natural enviroment. It is not by chance that still today Tebiano is described as the “city of breath”. 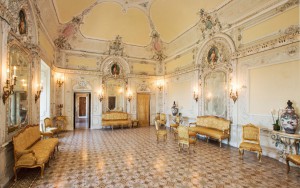 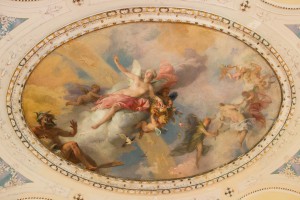 The hall of stuccoes, Tabiano castle

Cristina tells me that the territory is full of trekkings and mountain bike itineraries, there is the Francigena route and the abati route, the fluvial navigation of the po’, the house of Verdi and Guareschi. Tabiano is in an ideal area for the cultural and enogastronomic tourism of high quality, with enchanted landscapes and a unique heritage of fortresses, small palaces, excellent food, relax and the outlet of big brands of made in Italy. From here you can easily reach Modena, Cremona, Mantova and of course Parma and Piacenza, elected by Unesco as the “creative city for the enogastronomy”.

While Cristina is narrating her story I admire the imponent walls of the castle dated back to the XII – XIII century, the honour staircase, the terrace, the spectacular view on the Pianura Padana and, inside, the halls decorated with plaster, frescoes and mirrors, the emblems hall and finally the ancinet cellars that rest on the rock and where still remain a lot of barrels. Under the castle there is the ancient burg, recovered and transofrmed in a Relais de Charme, destination of international tourism. Tabiano with the fortresses of Bargone and Scipione (opened to the public) is part of the Pallavicino Triangle, in the protection of the salt wells of the area. Tabiano is also included in the Association of Castles of Parma and Piacenza’s Duchy, a fortresses network opened to the public, like Rivalta, on Trebbia river, Paderno, Sarmato and the rock of Soragna. The ancient burg of Tabiano

Going back to the castle halls, we stop in the library where Cristina shows me three books of her father to understand better the story of the castle, of the family and, above all, of the territory; she tells me about her activities to entertain the guests, like an enogastronomic itinerary at km 0, where the guests can experiment handmade laboratories or buy jams, wine, cheeses…

She persuades me that in this locality you can not only spend a weekend of charme, but also whole weeks full of diversions and events with a slow rythm among: “Italian expertises and tastes”.