A sour and essential land full of beeches, spruces and chestnut woods

The most famous mark of Italian tourism is Tuscany, in every way: in landscape, history, monuments, typical products, food. The Tuscan style is famous worldwide and influences the architectural styles: when I was travelling in Australia I met some architects who were asked to plan buildings in Tuscany style. But not the whole Tuscany is the stereotypical Tuscany. A different Tuscany exists, with its own flavor and a different landscape. That is the area of Mount Amiata, between the provinces of Grosseto and Siena, a sour and essential land full of beeches, spruces and chestnut woods, while the classic olive tree Tuscan landscape is rare. The Mount Amiata is a an extinct volcano, the Etruscans considered it sacred and home of their most important god, Tinia. The symbol of Amiata is a monumental 22 mt cross on top. It is the place of hot water and geothermal energy, coming from underground. Some names of the villages around are Arcidosso, Roccalbegna, Piancastagnaio, Castel del Piano, Abbadia San Salvatore, Seggiano, Santa Fiora, Radicofani.

The history of Mount Amiata area

The most famous village of this area is Arcidosso, dating back the year 1000, owned by the Aldobrandeschi family before and the House of Medici from the middle of 1500. Its symbol is the so called Rocca Aldobrandesca (i.e. fortress of Aldbrandeschi family). On Sienese side, is there the village of Abbadia San Salvatore, with its monastery and the important mining heritage museum. Then it is all beeches and chestnut woods. Piancastagnaio was owned by Aldobrandeschi family, again, and then by Orsini Counts. It is famous for its castle and for the geothermal energy production. 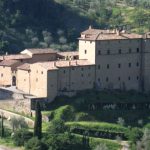 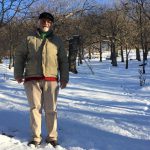 Patrizio in a chesnut wood 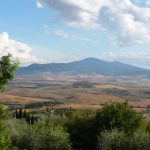 The village of Radicofani is famous for its fortress turned towards Orcia Valley, dating back the year 1000 and owned before by some monks and then by the Pope. It dominated the Francigena Way. This place is also the hometown of the legendary Ghino di Tacco, the Italian version of Robin Hood: from 1297 to 1300 he was considered a punisher fighting against injustice and bad powers, but many considered him just a bandit. The village of Seggiano returns closer to the ideal Tuscan landscape, with a few olive tree woods producing a fine local extra-virgin olive oil.

A silent a blind tourism

The area of Mount Amiata is not a rich place, facing depopulement and abandon as many other places on the Italian Apennines. That is the reason why the 13 villages of the area asked the region Tuscany administration for a development plan. The idea is to develop more and more a system balancing tourism, farming and nature. Widespread hospitality, caring of local excellences and breeding of local animal kinds as the “Macchiaiola Maremmana” pig or the “Amiatina” sheep. They promote the idea of a silent and blind tourism, not sad or depressing but fascinating, enhancing this lone land far from urban chaos, where still exist some lone trails. “Silent tourism” means visiting some really quiet places, better on foot. “Blind tourism” means that here is not light pollution and you can still see the sky and the stars very clearly by night. Mount Amiata and the next Mount Labbro are known as energy releasing places, reason why in the area many meditation or buddhist centre are born. Once in here, you have to discover David Lazzaretti story, the prophet of Mt Amiata, whose monastery ruins are still on top of Mount Labbro. He lived by the second half of IX century and he was a birocciaio, he used to build and drive the old wagons, the equivalent of a modern trucker. He was illiterate and poor, but he used to travel a lot, even until Rome, and he learnt a lot. At some point he had a holy vision: an old friar entrusting him a mission. He retired on a mystic solitude, founding a community on a new religious idea and developing some interesting social activity. He was some kind of hybrid between St Francis and Che Guevara! He gathered 500 people in a sort of cooperative where women could vote and everyone could go to school. He conceived the rainbow flag asking the attendants to his processions to wear many different colors. Both church and state were against him, and he was shot in the forehead, unarmed, in 1878. Many people climb on Mount Labbro to visit Lazzaretti hermitage. It deserves a walk, on sunny days the view on top is amazing and you can see the sea and spot the Islands of the Tyrrhenian Sea.

The nearest airports to Siena are the Florence airport and the Pisa airport ones. From Florence there are some Trenitalia trains getting to Siena in 1,3 hours (tickets 9,3€); from Pisa by train again – with Trenitalia – it takes almost 2 hours (tickets 10,8€).

Siena has a small city centre so the best way to move around the city is on foot. Pay attention if you go by bike, because the city is full of climbs! Anyway check the official website for public transports.

Siena is a small city in Tuscany, in the centre of Italy. The city centre is listed between the UNESCO heritage sites since 1995: don’t miss the unique shell-shaped Piazza del Campo (i.e. filed square), regarded as one of Europe’s greatest medieval squares. Here takes place the famous Palio di Siena, an historical horse race happening twice a year, every July 2nd and August 16th. Support your favourite contrada!