The very first time I visited Pompeii I was 8, I had just studied the Roman Empire at school and… I burst into tears! Too much excitement, too much beauty. You can come to Pompeii a hundred times and you would always have something to see or discover. That is the same for Hercolaneum, with its archaeological site and interactive museum. But once in here, include a trek up to Mount Vesuvius and in its natural park! I was been there twice: the first time it was May and it was covered in golden flowers, the last one it was January and it was simply amazing! It is full of biodiversity: 612 plant species, 227 animal species, 600.000 visitors last year… It deserves a visit indeed!

The famous Augustus’ Villa at Somma Vesuviana is half closed by now, because of some japanese researches in progress, but it is still very interesting. First, Augustus couldn’t live in here, because he used to live 200 years before the Villa was built. The villa was destroyed by the volcano eruption of 472 AD. Doesn’t these dates mean anything for you? In 79 BC the huge eruption told by Plinio that destroyed Pompeii and Ercolano. Shortly after, the Romans built a brand new fancy villa, destroyed by the volcano again. After the devastating eruption of 1631, again, people stubbornly came back to live in the area of Vesuvius. 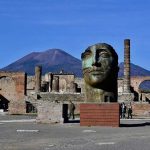 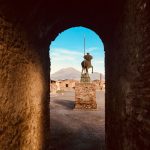 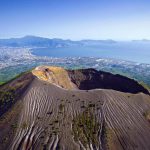 Nowadays the area of the park is quite narrow, less than 8.000 hectares, but 350.000 people live in there! Another example: the last eruption in 144 caused the death of 26 people and it devastated the area for 3 years, but mr Giovanni Russo in 1948 – just 4 years after – decided to come back for farming. Why do they always come back? Why are they so close to such a dangerous place? I can’t ask to the ancient Romans, but I asked Giovanni’s nephew (called Giovanni, again).

The young Giovanni quotes his grandfather: “During our lives we are in Paradise, then we can fall in hell”. This reminds me an old legend that named the finest wine of these lands, the Lacrima Christi: it would come from Jesus’ tears, who used to cry because Lucifer had stolen a slice of Paradise to take to the Earth, the Vesuvius of course. Then he asked me to give a wide glance to the landscapes of his vineyards: further down there are Pompeii escavations, then Naples. Behind the mount Vesuvius and further in the seaside the island of Capri. It is actually the Paradise. Under my feet a special soil, crumbly, dark and melted. Rich in minerals carried by the volcano: potassium, phosphore, silicium, iron. It is also very permeable, the water doesn’t stagnate, it goes straight to the roots. This is the real secret of mount Vesuvius and the reason why everyone has always come back, even after the worst eruptions: the beauty, the perfect climate, the richness of this soil. Speaking of the young Giovanni, he is a small farmer, owning just 12 hectares, where he produces with his father almost 60.000 Lacrima Christi’s bottles per year. He can exploit the beauty and the strenght of this land, farming with the local original techniques. He doesn’t sell his wine through the regular shops, you have to visit his farm, taste local recipes at his table, stroll around his land. Then you can buy some wine, directly! Positive cooperation of tourism, environment and agriculture.

That’s the mood of tourism here! When you come to the Vesuvius natural park you won’t just climb streight to the top, looking for the crater and the amazing view on Naples Gulf, you have to enjoy the walk all along one of the several paths, literally tasting your travel. Don’t forget the wine, as I said, but also the purple artichocke – a very tender local variety – and the famous grape tomatoes, available all year round, suiting perfect as a sauce for Italian pasta.

The valley of the mills and the windy road

The famous pasta from Gragnano has a long history: some fossilized bread was found in Pompeii, it had a trademark on, a letter G standing for Grania, the family of wheat farmers who gave his name to Gragnano. Gragnano is between the sea, the volcano and the Lattari Mountains: here cold and warm airs clash and blow. The perfect conditions to dry fresh pasta naturally, since a very long time. The proceeding of drying pasta is crucial for its quality, flavor and healthiness. This applies the water too, one of the main ingredients of pasta. The Vernotico is a small river flowing between volcanoes minerals and draining soils, giving some excellent pure water. The rules to make Gragnano pasta PGI: water, bronze die processing, Italian wheat with a minimum of 13% in proteines (some strong wheat that make pasta not to overcook). The history of this pasta dates back to the Middle Age, its golden age was the IX century with 120 pasta labs, the XX century means mechanization and migration, then the World Wars caused a breakdown and the pasta labs lowered until 10 in all. Nowadays the solution is to focus on quality, today the pasta labs are 20 and their pasta is definitely unique.

Goethe, after his Italian Grand Tour, used to say about the area around Vesuvius: “Here the terrible is opposed to the beautiful, the beautiful to the terrible: they cancel each other out, and the result is a feeling of indifference.”
I don’t agree with Goethe, I don’t believe the indifference is a thing here. Perhaps these people are often resigned to many difficulties like arson, urbanisation abuses, illegal dumps and so on. But at the same time they are extraordinarily clever, creative and energetic.

Would it be because of the volcano?