Monza: the legend of Queen Theodelinda

And her divine communication with a dove

Monza is a suburb of Milan. It is located 9 miles north-northeast of the mega-city and is known worldwide for the 137,000 capacity Autodromo Nazionale Monza – the home of the Formula One Italian Grand Prix – so famous for the races held there that the city has a children’s board game named after it! Monza the city is large – over 120,000 people – and very attractive and clean with cobblestone streets and ancient churches in its historic center, and sophisticated residents throughout. The town has a classy and patrician feel and is a mixture of modern and old. Unlike Milan, which reminds me of Paris, Monza reminded me of Brussels. More relevant for those with physical entertainment preferences, Monza has the fourth largest enclosed, urban park in Europe. The walled Parco di Monza is 688 hectares or approximately 1700 acres. That 2.65 square miles is composed of 1100 acres of manicured lawns and gardens, and 600 acres of forest. The Lambro River runs through the southern end of the park. Catholic myth teaches that the legendary Queen Theodelinda was riding alongside the Lambro in Monza when a dove spoke to her telling her to build a church there immediately. She did!  Today, the seventh century Duomo di Monza dedicated to Saint John the Baptist stands as testament to that fabled divine communication. The Parco di Monza was actually built by Napoleon’s adopted stepson during the French occupation of Italy as an extension of the garden for this heir presumptive’s royal palace – a much less interesting history and a much more selfish one! Theodelinda (570-628) – Queen of the Lombards – brought the Iron Crown to Monza. Theodelinda Catholicized much of northern Italy and brought holy relics to her kingdom which included the Iron Crown and a piece of the True Cross. 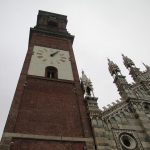 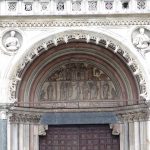 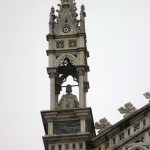 The Via Regina is named after this much loved queen. The Antica Strada Regina is the ancient Roman trade and military route that connected Cremona and Milan, and came to include a primary road and related paths running up the west side of Lake Como linking Como and Milan to the Valchiavenna.

The Iron Crown of Lombardy allegedly had a nail from the True Cross in it and a piece of the Gospel of John. The inner ring of the crown was tested and it is sterling silver and not iron. The belief remains that the crown did contain the nail of legend when Theodelinda bought it to Monza. The crown is one of the oldest relics of Christendom and has been used to crown all the monarchs of Italy since the 11th century. It was last used in 1838 to crown Ferdinand I of Austria the King of Lombardy-Venetia which was part of the Austrian empire at this time. The crown is made of gold with a nail beaten into the center. It has six segments joined by gold hinges. The segments are partially enameled and the crown has twenty-two gems. The jewels are seven red garnets, seven blue sapphires, four violet amethysts, and four gems are made of glass. All are cabochon and not brilliant. The crown has been restored- the first restoration occurring in 1352. Some parts are not original since the crown was vandalized and pieces stolen. Those who have studied the crown consult history  – a note from the Roman Ceremonial of 1159 – and claim the iron nail was laid over the crown in an arc and was never part of the inside structure of the circlet.

Theodelinda built and endowed the basilica of St. John Baptist at Monza in 603. I went to the adjoining Serpero Museum that adjoins the Basilica and saw the actual Iron Crown of Lombardy and the many medieval antiquities belonging to the church and Theodelinda. She was generous in her patronage of the Duomo. The crown is located on an altar inside the right transept of church.

Text and pics by Virginia Merlini