A paradise for birdwatchers and horse trekkers near Monfalcone

Monfalcone, in the north east of Italy, is famous for its centenary shipbuilding tradition. Here you can find the interesting Museum of Fincantieri, a shipbuilding company established by Cosulich brothers in 1908. A place of craft and hard work, more than a touristic destination. However, you will soon realize that Monfalcone worths a journey.

At the mouth of Isonzo river, there is a Nature Reserve called Cona island park. It is a unique place, not only for educational school trips. From an “environmental and political” point of view, for example, these lands in the past have been improved and addressed to agriculture. But nowadays, they are being restored to their natural origin. As you do for paintings, monuments or city planning, here locals restored an entire land area. They created a natural art masterpiece, they brought back the original marshland that became a kind of ornithological hub, some kind of transit airport for all the migratory birds, that pass by and often decide to stay.

A paradise for birdwatchers! Try a boat trip on the Isonzo river or some horseback ride, it is as good as French Camargue! The whole park is an environmental experiment and it is totally independent in term of green energy. You can visit two pleasant museums: first the Museum of Energy, full of big explanatory models explaining how solar panels, solar heating, wind farms, biomass system and other green stuff like these do work. Then a Museum dedicated to Donald Duck! True story. Not only childish cartoons, but scientific matters: Donald Duck is nothing but a royal domestic mallard, Gus Goose is a goose, Duffy Duck a rare example of American black-duck, and so on.

Near Duino you can see an important fossil called Antonio the Hadrosaurid. It is the fossil of a 70 million year old dinosaur, found in the karst rock of the cliffs, solidified into the mud.

Aquileia is famous as a Roman colony (in 181 bC). There are a nice Museum and a fascinating Cathedral with a roof shaped as a ship’s hull. But the most interesting thing of Aquileia is underneath the bell tower – a copy of famous Lighthouse of Alexandria – : digging its foundations some ancient mosaics came out, full of Oriental signs. There is also a she-wolf suckling the two twins, a Roman or Asian ancient symbol?
The whole area is full of signs of the ancient pre-Christian cult of God Mithras, a well evolved religion which adored the Sun and knew a lot about astronomy and equinoxes. There is also a Mithras cave, discovered by a group of cavers in 1963. Here some sacrificial rites took place, old traces of bull blood have been found.

This is land of great fishermen, there are both the sea and the river, you can find almost every kind of fishes: during the spring season you can go cuttlefishes fishing, in winter you go for squids. A transit place, thinking about history and anthropology point of views: everything and everyone has passed here. There are many evident connections with the East, here it used to end the famous Amber Road which led to the Baltic Sea. A vital crossroad from the North to the Adriatic and Mediterranean Sea. 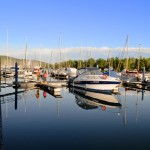 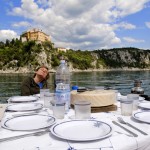 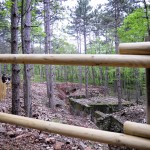 If you meet people born in Monfalcone, let’s play the “Grandparents’ game” with them: everyone has got 4 grandparents who are often from different places, like Istria, Veneto region, Austria, Slovenia, Hungary, Poland, Greece, Czech Republic… But almost everyone will declared at last to be Bisiachi (the inhabitants of Bisiachìa, the land between the rivers Timavo and Isonzo), or generally “Central Europeans”. Today this multi-ethnicity is a big opportunity, but in the past it has been a fighting reason. Take a walk on the hills behind Monfalcone where you will find a beautiful place: the Karst Plateau. There is the World War I theme park with traces of the war trenches, a very interesting place where having pleasant promenades (unless it rains!). 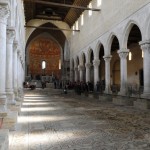 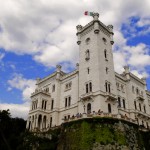 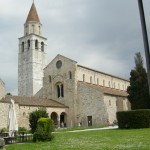 Sailing eastward along the coast, you will find first the Duino Castle and then Miramare Castle, property of Maximilian of Hapsburg, built in 1860 by the architect Karl Bunkler. Visit the Castle and its courtyards, the style is romantic, reminding a sweet white meringue! But the most special attraction is yet the Marine Reserve: full of fishes, especially during summer. We are already in the very centre of Trieste Gulf, near the city. e would like to realize another wish: sailing in inland waters, westward. From Cona Island, you can reach Venice through channels! By houseboat, why not! Sooner or later…

Trieste has a national and international airport, but for transcontinental flights you have to stop in other airports. Otherwise you can arrive in Trieste by trains, buses or cars. At the airport you can get a local train to the city centre (30 minutes ride, 4€), same by bus.

Trieste is a small city, you can visit it walking or you can choose the public transports. The single tickets costs 1,25€ and it lasts 60 minutes. Something you should probably do is taking the typical Opicina’s tramway, a centenary tiny train running from Oberdan square to Opicina villa. Currently the service is not available, but hopefully it will reopen soon, check it.

Trieste is the capital city of Friuli Venezia-Giulia region, North Eastern Italy, towards Slovenja. The historical centre is really beautiful, don’t miss Piazza dell’Unità (i.e. the main square, on the dock) and San Giusto’s castle. Miramare Castle deserves a visit too, located a bit farther from the very centre, you can see it perched on the gulf from the main dock.

Nearby, the Roman village of Aquileia is listed between the UNESCO Heritage Sites and if you are fond of active tourism and nature, explore the Natural Reserve Cona Island. Check #italiaslowtour deals page to get a tour in the natural environment near Trieste on a budget.

Every October in the Gulf of Trieste takes place the Barcolana,  the largest regatta in the world. Hundreds of sailing boats different in shape and size compete in a non professional race. Such a unique sport event!

Accomodation in Trieste can be quite expensive, better to book in advance!