Medea, your next relaxing holiday

In the middle of corn fields and vineyards

by Maria Chiara Felchero. Medea is a small town in Northern Italy, in Friuli Venezia Giulia region, halfway between the Alps and the Adriatic sea and pretty close to the Slovenian border. Medea is dominated by a nice hill, on the top there is a war memorial built in 1951, in honor of all the soldiers fallen in 1st World War. The position of the town is great, far from highways and factories, Medea is a real oasis in the middle of corn fields and vineyards where you can relax and enjoy a paceful atmosphere. Despite the size of the town, in Medea you can find everything you may need: near the town hall there’s a post office and, opposite the school, a pharmacy. Not far, in an ancient house, you can find a brench of a local bank in case you need to withdrow. A little grocery store, a bakery, a few restaurants and a pub add vitality to this peaceful place. The best way of spending a day in Medea is by walking or by bike through the town and the nice trails of the “Parco Colle”. If you can spend some days more in town, you can book some nights in one of the two agritourisms and plan to visit the historical sorroundings. Not far from Medea there are the Roman city of Aquileia, famous for its Roman ruins, the longobardic city of Cividale and the star-shaped city of Palmanova. These places are just about 30 kilometers far from Medea, you can easily reach them by car in about 30 minutes driving. 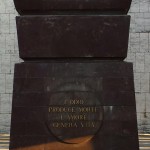 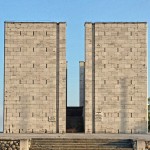 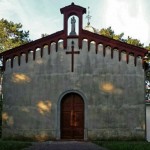 Medea had been involved both in World War I and in World in War II. The hill had been theater of battles and you can still see the foxholes. During World War I a military observatory was built on the top of the hill; king Vittorio Emanuele use to come here often. You can still visit the Observatory, a memorial stone called “Osservatorio del re” reminds you that historical facts. Between 1943 and 1945 Medea was occupied by German troops and in 1951, after the end of the war, it was built a memorial designed by the architect Mario Baciocchi from Milan and called Ara Pacis. Inside the monument there is a big urn, containing some pieces of land taken from 800 national and international war cemeteries, cruets with water of Mediterranean, Ionic, and Adriatic seas, where a lot of boats sank.

Parco Colle is a natural protected area and it provides a variety of leisurely walks of different lengths and peculiarity. Put your gym shoes on and get ready for a full immersion in nature! You can experience the different trails both on foot and by bike, if you are going to stay a few days in town, you can plan a series of walks or bike rides to appreciate the scenery along the park. The most interesting trails are: 1- Scalinata di Sant’Antonio (that is “Saint Antony’s staircase”) You can park your car in Corso Friuli street and go ahead on foot untill Osservatorio street; keep your left and start walking up the 343 stone steps in the middle of pine trees till you reach Saint Antony’s church. Saint Antony is a little church built in ‘700, in honor of the Saint. Deeply damaged during the war, it has been recently refurbished. It stands in the middle of a pine grove where you can relax and enjoy a breath of pure air. Not far you’ll find a pic nic and recreation area. 2- Ara Pacis trail You can leave your car in the free car parking opposite the graveyard in Roma street, from here you can start the trail that leads you to the Ara pacis monument built in 1951, as above mentioned. Please note that this trail is about 3 km long: if you are fit you can easily reach the top of the hill in about one hour walk; if not, consider to reach the monument by car. On the top of the hill the view is great, in bright days you can even see the Adriatic sea. Close to the monument there is a a little modern memorial built in 2008, it is called “Corte dei Nobel” because it is made up of 7 colums with photoes and panels explaining history and life of people who spent life struggling for peace and who won the Nobel Price. 3- Osservatorio del Re (that is King’s Observatory trail) Nearly the end of the street which leads you to the Ara Pacis Memorial, you can easily find on your right a not paved trail which leads you to the military observatory built during World War I. There is still a memorial stone where the army put the observatory post. 4- “Clap” trail Take the street that leads you to the Ara Pacis monument, after 500 mt you’ll find this trail on your left. It is actually a military trail built in 1915 by the Army. While walking you can still see the defence lines and the foxholes built during World War I. “Clap” in local dialect means rock or stone; the trail passes through the rocky and bare side of the hill. 5- Daur la mont trail (that is Behind the hill trail) When in Medea, don’t miss a walk or some jogging along this trail: 3 kilometrs of non paved path from Medea to the little town of Borgnano, a place where the time has stopped… only a few houses, one pub, a little shop and Santa Fosca church. It is named “behind the hill trail” because of its position, just behind the hill. Park your car opposite to the cemetery and walk about 10 minutes, you’ll reach a junction; keep the left and start your walk along the trail. It is a real full immersion in nature and silence, you’ll hear only the sound of the wind and the birds in the fields; farmers occasionally pass by with their tractors. Every season gives you the possibiliy to appreciate a different landscape; enjoy the snowdrops in winter, the sound of cicades and crickets in summer, the smell of flowers and grass in spring and the carpet of red and yellow leaves in autumn.

A charming stroll among ancient Villas

Leaving the town hall behind you, turn right in Torriani street and at the intersection turn left; in a few minutes walk you’ll reach a nice square where you can see the facade of the former Mels Colloredo’s Villa, incorporating a mighty portal with the horseshoes. Opposite the villa you can see a little church commissioned by the family for private cult. Colloredo Mels was a noble family of land owners who played an important role in local politic. Go ahead a little bit more and you’ll see a red house, the former Baldi’s House, a rich family from Tuscany. The house was refurbished and nowadays a family lives in. Turn back and walk till the centre of the town; in Corso Friuli street you can see the “Sala Civica”, a little red building with stone stairs; in the past this was the town hall. Go ahead till Godeassi square and you’ll find another ancient house, give a look at the facade and you’ll see a sundial. In the middle of the square there’s an old iron pump which was in use about one hundred years ago, to keep water from the subsoil. Proceed along Diaz street, the whole street was owned by the Dubzky Family; there you can see the complex of former Dubzky’s houses. In early 1900 he became the town Mayor and he worked hard to improve both school and public administration system. At the end of World War I, the Frygyessy Family bought the house; they were Jewish and during the Fascist regime, due to racial lows, they were forced to leave the town. The house was sold to the businessman Vritz. In 1970 a holy order bought the whole complex to built an hospital for disabled people that is still operating. At the end of Diaz street turn back and go ahead till via Roma; at the first corner you see the former Del Mestri Villa; take a look at the front gate and at the stone windows squares.

(thati is “the scarecrows festival”) If you’re planning to visit Medea, try to come between the end of May and the beginning of June to join one of the most important events of the year: the Scarecrows Festival. The days before the feast, all the people are engaged to realize scarecrows using wood, straw and old clothes and put them out of the door. The streets are crowded of funny “straw men” and many people from the sorrounding areas come to see them. During the Scarecrows Festival you can attend a long list of shows: you can join buggy tours, the local marching band show, the foot race or simply have fun at the kiosks eating local food and cakes or tasting the local wine. Why scarecrows? Medea is a little community based on agriculture, in the past farmers used to put scarecrows in the fields to keep birds away, in order to protect the crop. Nowadays modern agriculture doesn’t need scarecrows, but we can think of them metaphorically as a funny way to keep sad things away, like economical crisis, unemployment and illness. Don’t miss it, fun guaranteed!

Trieste has a national and international airport, but for transcontinental flights you have to stop in other airports. Otherwise you can arrive in Trieste by trains, buses or cars. At the airport you can get a local train to the city centre (30 minutes ride, 4€), same by bus.

Trieste is a small city, you can visit it walking or you can choose the public transports. The single tickets costs 1,25€ and it lasts 60 minutes. Something you should probably do is taking the typical Opicina’s tramway, a centenary tiny train running from Oberdan square to Opicina villa. Currently the service is not available, but hopefully it will reopen soon, check it.

Trieste is the capital city of Friuli Venezia-Giulia region, North Eastern Italy, towards Slovenja. The historical centre is really beautiful, don’t miss Piazza dell’Unità (i.e. the main square, on the dock) and San Giusto’s castle. Miramare Castle deserves a visit too, located a bit farther from the very centre, you can see it perched on the gulf from the main dock.

Nearby, the Roman village of Aquileia is listed between the UNESCO Heritage Sites and if you are fond of active tourism and nature, explore the Natural Reserve Cona Island. Check #italiaslowtour deals page to get a tour in the natural environment near Trieste on a budget.

Every October in the Gulf of Trieste takes place the Barcolana,  the largest regatta in the world. Hundreds of sailing boats different in shape and size compete in a non professional race. Such a unique sport event!

Accomodation in Trieste can be quite expensive, better to book in advance!