A walk around Lecco and Pescarenico

A walk in the charming city of Lecco and its ancient district, Pescarenico

Lecco is very pretty and charming. I drove along Lake Como going north and parked near the Lake Como water taxi and took a few pictures. The lake walk is beautiful and the brick path lined with tall, stately trees. The view never stops being beautiful. I think I will drive the length of the lake and all around in the next few days which are supposed to be rainy. This will be a good rainy day plan. Lecco is a medium sized city with about 50,000 residents.The town was part of the Roman empire and Lecco was an important center where roads to other parts of the Western Roman Empire met. Prior to the occupation by the Romans there were Celtic settlements here. After the fall of the Roman Empire the Lombards took over the territory and town. The Lombards were a Germanic tribe. They dominated Italy from the mid-6th to the late 8th century. The Lombard language is no longer spoken but many Italian words are Lombardic. Hence, as a vibrant, populated city, Lecco’s history extends back to the 6th century AD. In the center of the city there seemed to be more of a middle class and student ‘feel’ and going down the river and lake to the south, the buildings were old – maybe early 19th century – and many looked in need of repair and not at all ‘chic’. To me they were ‘shabby’ quaint  and very rustic looking. These were definitely very old, waterside neighbourhoods established hundreds of years ago. Here are some pictures of the 16th century Duomo of Lecco – the Basilica Di San Nicolò. The original church was built in 1252. The current basilica was built in the 1500‘s. The doors of this church are very beautiful and have scenes from the life of Jesus in metal relief on the outside. All the churches have large outer entrance doors, then a small foyer followed by inside doors that lead into the church proper. Saint Nicholas is the patron saint of sailors making the dedication of this Duomo to him particularly meaningful given the importance of Lecco as a port city on the lake and river. The Doumo is directly on the waterfront. If one walks down the stairs in front of the basilica one is only about one hundred yards from the lake. 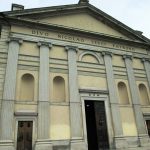 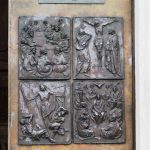 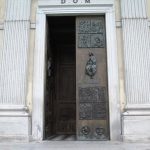 Pescarenico: the ancient district of Lecco

I headed to  the ancient district of Lecco on the waterfront called Pescarenico. The human settlements in Lecco date to 2500 BC and the remnants of houses built on stilts are found in the ancient lake front neighborhood and old 16th century fishing village of Pescarenico. Early Iron Age artifacts were recently unearthed and it is close by here in Lecco that is found the oldest site of metallurgical production in the Alps. Pescarenico is still home to fishermen who make their livelihood from the River Adda and Lake Garlate, and who supply the restaurants of the lovely waterfront town with local fish. The fish here is often served with polenta. As I was taking pictures of a lovely little isola in the River Adda that I had been curious about, the couple standing on the riverbank whom I had been manipulating my pictures to avoid capturing, began to walk toward me pointing and talking. I thought they were expressing concern over being in my photos so I told them I had not taken their picture and offered to show them my shots. The woman, responding to my broken Italian and hand motions, spoke to me in English. She told me she was happy to have her photo taken and asked me if I would like to visit the island. I was so delighted I was almost speechless! How lucky for me!!!

The island is in the Pescarenico district – sits on the River Adda between Lake Garlate and Lake Como – and is called Isola Viscontea.  The island is about 360 feet long and 88 feet wide making it about  3/4 of an acre –  or 3/10 hectare as is measured here – in area. It is separated from the mainland by about 36 feet and one can only reach the island by boat. It belongs to the municipality of Lecco. The island is not a natural formation in the river and was the result of an enlargement of the riverbed in ancient times to prevent flooding of the surrounding towns namely Como to the west. The structure on the island is a fort that dates to the 15th century and was used to defend the town. The island eventually was privately owned and the fort was used as a private residence until 1956.