Slow Tour on the Lake Como

Como sits on the edge of Lake Como and in driving there one ascends about 1,000 feet. Hence, the last few miles into Como are down a steep and winding road. The roads here are perfectly maintained, well-marked with warning markers for sharp turns and town directors. The traffic in and outside the city moves quickly even during rush hour. The secret to unclogged roadways is –  the rotary. Italy is the land of rotaries. Where the US has a stop light or stop signs at every corner and intersection, Italy has a rotary. The traffic literally flows like an uncongested river! Como – Como – Como! I had no idea! Como rocks! The city is old – the city is new – the city is exciting in a New York kind of way especially if one braves driving in the old city center down at the lake edge. Como looks ‘rich’ like Milan, and old but stately, and new with fashion and youth. Como is not quaint or cute despite the older buildings one encounters on the drive down the mountain into the old center. The wealth of the original residents is clear in the size of the homes and richness of their design. It was a rainy day in Como but the weather held long enough for me to get some wonderful photos of the Duomo of Como which is dedicated to the Assumption of the Blessed Virgin Mary. The church was begun in 1396 and has been an ongoing project since then. It is of course too large to be seen completely in one shot so I took pictures around the cathedral to give you an idea of the grandeur. 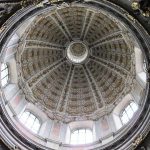 Cupola of the Duomo of Como 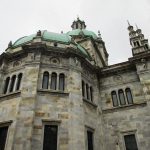 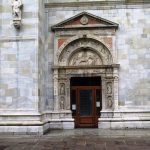 The castle of Corenno Plinio

I was looking for a place to turn around before heading home and I saw a fabulous castle. Well – I HAD to stop. A castle on Lake Como! How had I not heard of this in all my googling! The Castle of Corenno Plinio sits in a strategic position on the lake. Always small – ranging from an estimated 100 inhabitants to the present 250+ inhabitants – the village became an important stronghold when the Andreani family of Counts established the Castello there in the late 13th century. The descendants of the family (Famiglia Marietti) still own the Castle! And the castle and homes look to be about the same age! There are only nine short streets in the hamlet and all of them radiate from the central plaza – Piazza Garibaldi. Given the depth of the moss, the quality of the stone, and the look of the town, I would venture to guess that these current homes date from the 17th century. The streets may be older as may the houses since the Castle is from 1271!

The town lies on the 45k/28 mile Roman mule path – Sentiero del Viandante (Trail of the Wanderer) – that runs from the Church of St. Martin in Abbadia Lariana to 3.5 miles east of Colico at the Sanctuary of the Madonna of Val Pozzo in the district of Piantedo – the feet of the Valtellina – near my hometown of Cosio Valtellino! The Counts Andreani with their fabulous castle controlled the Sentiero del Viandante – an important trade route.

So – here is a bit about Corenno Plinio. The village is very old being on the Roman road that runs the length of the eastern side of Lake Como. Corenno Plinio’s history only truly begins with the Counts Andreani and the building of the Castello which enabled control of the region and the important trade and travel routes in that area. Initially Corenno Plinio was a part of the province of Lecco and the comune of Dervio in the Duchy of Milan. In the 18th century the village was transferred to the rule and province of Como and then back again to the Duchy of Milan. During the Napoleonic era – the 19th century – Corenno Plino became a frazione of Dervio. In 1927 this status was made official and so it remains today. The number of residents has only doubled in all those centuries – perhaps an indication of a love of history and tradition which keeps homes and land in the same families for centuries as the Castello di Corenno may attest!

Of course there is a beautiful church! No town is without one at its center and heart. In the Piazza Garibaldi and abutting the Castello is the church of St. Tommaso of Canterbury, XII. The church was consecrated in 1327 and it was made a parish in 1566 by the Archbishop of Milan, Carlo Borromeo. The church was closed when I was there but the literature claims that it has remnants of frescoes dating back to the Lombard school of the XIV to XVI century. I took pictures of the three tombs on the front of the church. They are the tombs of Counts Andreani, lords of Corenno. The style is Gothic and they are beautiful! I am so delighted to have found Corenno Plinio for its beauty, its history, and the new adventure that I am planning of walking the Sentiero del Viandante.

On the Via Regina – the ancient road of Theodelinda, Queen of the Lombard’s – and in between the family towns of Pianello del Lario and Dongo sits the small village of Musso. Musso sits at the foot of Mount Bregagno on only 1,000 acres and edges the coast of Lake Como in a few narrow, steep streets. It has a central church, a church on the mountain side, and a castle – all three from the 14th century. Many of the old walls of the village are still standing. There is a botanical garden on the mountainside. The town has a population of 1,060 – about 1 person per acre! The homes are crowded together and farm land is made good use of in the open areas. Musso’s two churches are both original to the town and castle fortifications of the 14th century. The botanical garden is from the 19th century. The Church of Saint Biagio – built in 1387 – sits right on the Via Regina with only a six-inch curb to separate it from the one-lane road through the center of the village. The Church of Saint Euphemia – original to the 14th century –  sits on the Stone of Musso and was restored in 1662. It lies within the ruins of the Castle of Musso – a fortress that was controlled by a member of the Medici family – on the mountainside overlooking the panorama of Lake Como. It is contained in the frazione of Genico. The original church was built on the ruins of a pagan chapel. In front of St. Euphemia is Giardino del Merlo (Garden of the Blackbird) – a botanical garden engineered by Giuseppe Manzi. 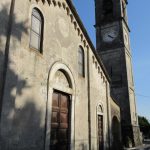 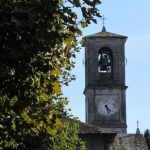 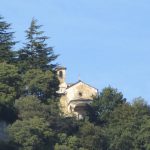 I did spend some time in St Biagio’s. The 14th century church of Saint Biagio, also known as Saint Blaise, has a lovely interior that is decorated with colorful frescoes. There are frescoes painted in 1502 by a Musso native – Battista Malacrida and 19th century frescoes painted by Luigi Tagliaferri. St. Biagio was made a parish church in 1387! Saint Biagio was tortured by being beaten and having his limbs torn off will the metal combs used to comb wool, and then martyred by being beheaded. Consequently he is the patron saint of wool workers. Saint Biagio was also a physician in ancient Armenia in an area now part of Turkey. He died in 316 and is among the 14 Holy Helpers. In Catholicism, these Holy Helpers are believed to have interceded for people who suffered from diseases such as the Bubonic Plague. Since Saint Biagio cured a boy choking on a fishbone shortly before his execution, he is known for diseases of the throat. Since he was tortured with the tools used to process wool, he is known to help domestic animals – creatures crucial to survival in the ancient world. 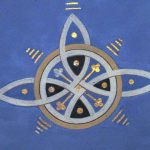 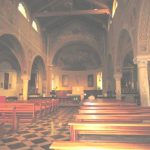 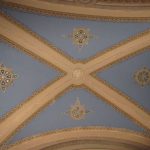 Nesso is a small comune of about 1,300 people. It is located in the Triangolo Lariano, the area in between the two branches of Lake como. Nesso sits precipitously on the edge of the hills leading into the San Primo mountain range. The town is directly across the lake from Brienno and is about ten miles south of Bellagio. Nesso – view of the Ponte Roma from the 340 steps path

The village has a lovely ancient Roman castle which is privately owned, two gorgeous old churches – the Church of Saints Peter & Paul that is lungolago and the much older Church of the Assumption of the Blessed Virgin Mary that is up the mountainside and above the lake. It has an old Roman bridge. Made by two Alpine streams that come together above the town, a cascading waterfall creates a pool and a stream that flows under the old bridge into the lake. I leave you with a few vistas of Nesso in the autumn from the over 2,000 year old Ponte Roma. I enjoyed my day walking the ancient 340 steps to the Orrido di Nesso – the Ravine of Nessus! Nesso – the Ponte Roma looking back toward Nesso

The name Nesso is the Italian version of the Latin name Nessus. Both mean ‘link‘ in English.  Nessus was the lust filled centaur of Greek mythology who – drunk on wine – tried to rape Deianeira – the wife of Hercules. Hercules killed him with a poisoned arrow for his crime. After his death, Nessus became a ferryman in Hell. In fiction, Nessus is found in Circle 7 of Hell (Inferno) in Dante Alighieri’s Divine Comedy. Nessus urged by the poet Virgil – Dante’s guide through Hell – allowed Dante to ride on his back across the river of boiling blood where violent sinners were poached for eternity. But pretty Nesso is most famous for the 2,000 year old Ponte Roma– the Roman Bridge which spans the river created by the convergence of two torrents.The rushing Alpine waters of the Tuf and Nose have carved a stunning gorge and waterfall – Orrido di Nesso.