A bike tour deep in the nature and local food tasting

We arrived at Florence airport in the morning and were picked up by our friend Wolfango who brought us to the Legambiente environmental and educational center for responsible tourism and renewable energy in Rispescia near Grosseto. There, Romina and Fabio of Legambiente showed us a low energy house. Special tilts were used for building, and the walls are isolated with hemp fibre. The heating can be switched into an air conditioner, and there is also an underfloor heating.

Fabio then brought us to the agriturismo Il Duchesco in Alberese where we stayed for two nights in a beautiful room. In the afternoon, we walked through the farmlands, saw olive trees, grape vines and vegetables which are grown there, and saw the two windwheels which can produce twenty to fourty kilowatt-hours depending on the wind force. 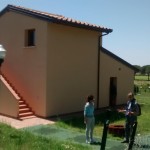 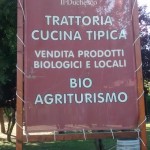 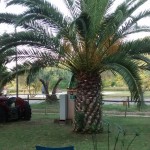 In the evening we met Fabio of Legambiente again, and then another Fabio, the head of Il Duchesco, and Fabricio from the bike rental, Claudia, our tour guide, and Giovanna, the secretary of the Maremma Park Info Center. We discussed the plan for our visit of the Maremma Park. We were invited to a great dinner with a variety of Tuscan food. We had, for instance, as first course a zucchini creme soup garnished with a potpourri of coloured blossoms, a big ravioli kind pasta dish called bubero, and a variety of cheeses. It is common here to eat them with a little jam, e.g. homemade red onion jam and orange marmelade. For main course, Peposo, a spicy dish from Maremma cow meat with grilled vegetables was served. Another meat dish we tasted had been cooked for two hours in a plum sauce as we were told. Very tasty! And, of course, we tasted the great wines that are produced in this Agriturismo.
For dessert, we had almond cookies with Vin Santo, a sweet wine. We were very impressed by the warm hospitality we met at Il Duchesco! 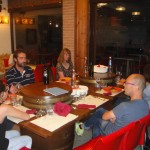 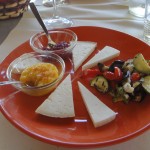 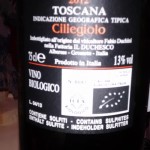 A taste of local wine

A day in Maremma Park

Fabio of Il Duchesco kindly took us by car to the Maremma Park Info Center in Alberese. Our tour guides Claudia and Fabio of Legambiente were already waiting for us there, and Fabrizio helped us to find the right bike for today’s trip to the Maremma Park. Finally, we headed for the hills in front of us. They were not as steep as we had feared… We entered the park on a comfortable biking path leading through a forest of magical beauty! The prevalent species is the holm oak, but also beech trees and juniper trees and many bushes are to be seen – all together is the Macchia which is hard to pervade, but in the park, we are supposed to stay on the paths, anyway. Fortunately, Claudia had a key for the numerous gates of the fences which are supposed to keep the animals inside the park.. In the middle of the forest, we stopped at a crossway named “Pratini”: Four hiking paths start here. 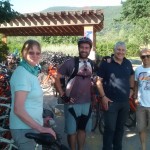 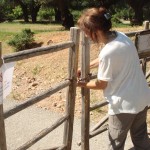 Opening secret gates into the Park!

Claudia showed us the tower of the former San Rabano Benedictine monastery high above on a hilltop. There are several towers like this one on the hills because in ancient times, the coast was not inhabited and it had to be watched frequently because of the potential risk of pirates trying to invade the country from the seaside. After this short excursion to the history of former times, we looked down again to our proximate surroundings: A beautiful large butterfly catched our eyes. It is called Macaone like Claudia told us, and I call him Leopard Butterfly because of his yellow and black painting!

Getting on our bikes again, we took a glimpse on a huge green and blue shimmering beetle that ran hastily across our path – and of course we had to pursue him with our cameras before he he hid beneath the grass… Claudia knew his name: Robber of crysalis.

We went on and came to a beautiful old olive grove. The trees are 300 to 400 years old. From the 1960’s on, the olives were collected and processed to oil. The old oil press is to be seen in the Alberese Info Center. Nowadays, the oil production has become unprofitable and the olives are left to themselves. The grass beneath the trees is held short by special gardeners: The cows that live in the park! 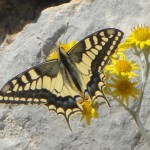 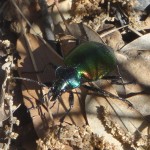 The beetle “Robber of crysalis” 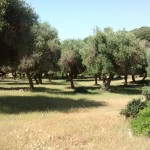 We came to see a flock of these Maremma cows soon after we came to a place from where we could look down to a meadow below us. The cows which are half wild live here how it is supposed to be – together with their whole family! The calves are not separated from their mothers as usual in captive breeding. The gray and white patterned, long-horned Maremma cow used to be the working animal for the Tuscan farmers, therefore it is strong and musculous. It is one of the biggest cow races in the world. As mentioned before, the cows inhabit large areas in the park and are – besides the horses – obviously the best known animals there. Wild cows in the Maremma Park

Claudia told us that in former times, the whole region beneath the hills was covered with swamps between the deltas of the rivers Umbrone and Bruna. These swamps were dehydrated by an ingeniously constructed system of canals, and meadows arose. Between the two world wars, families came here as farmers to cultivate the region. Behind the meadows, close to the coast, we see an impressive pine wood which has been planted long ago. The network of there near-surface roots keeps the soil together and protects it from destruction. By the way, people collect the pine nuts which ripen everey three years.
Between the trees, the drainage canals are to be seen.

Now Claudia suggested to climb up a footpath to the nearest hilltop. Therefore, we tied our bikes together and went ahead. On the way up we saw a fallow deer in the distance on a meadow, but was too far away to get a good photo…

Many wild animals live here in the park such as wild pigs, porcupines, hares, fox and brocks – but they are shy and hide themselves… Though, first of all Maremma Park is a bird paradise. High above in the sky, we discovered a raptor which might be a buzzard, and a pheasant walked over a meadow. 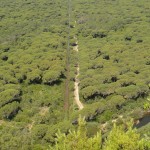 Drainage canals between the trees 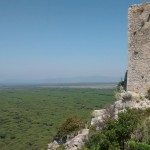 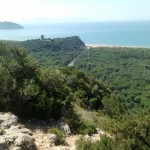 View from the hill to the sea

On the hilltop, next to the Castelmarino tower from the 12th century, the view over the Tyrrhenic Sea was breathtaking! In the misty distance, we could adumbrate the island of Giglio. In the north, we discovered the city of Castiglione. In the south, Monte Argentario dominated the scene. On the hill range behind us, several watch towers were to to be seen – you didn’t know where to look first!

On the walk back downwards, Claudia told us a lot about the plants here. First she adverts us to the wonderful fragrance in the forest which arises from a diversity of the evergreen bushes such as myrtle and rosemary. We found two sorts of juniper bushes. We learnt that the berries of one sort is edible for humans and animals and the other just for animals. Most of the trees and bushes here develop berries to feed them… Finally, we picked up our bikes again and took ahead for the beautiful beach which is only to be reached on foot or by bike. 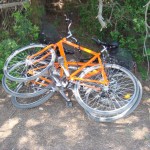 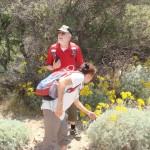 Wolfgang into the bushes 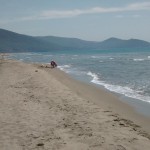 We locked our bikes again and climbed over the big dunes, admiring the wild rocks behind us. In former times, the pirates might have lived here, I suppose. We swam in the sea which we enjoyed very much; but Claudia told us that the Italians usually go swimming in July or August when it’s really warm. Anyway, we could not wait so long! After the swimming break, we went on sandy paths through the pine forest to have a lunch break. I had not expected such a nice little restaurant neatly hidden behind the trees. We enjoyed the meal with salad and toasted sandwiches and then continued our bike tour.

Coming out of the forest, the bike path became even more comfortable. We took a look over the wide march lands and had the opportunity to see the cow herds together with a huge impressive bull very near by (I was happy that they all were behind a solid fence!). Finally, we left this beautiful park and went back to Alberese on al little road. We gave back the bikes at the rental station and had an iced Espresso because it had become quite warm, meanwhile. Claudia took us back to our inn. She is a very nice and competent tour guide, and we enjoyed the day with her very much. 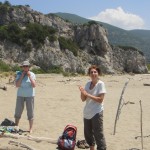 Gaby and Claudia on the beach 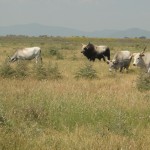 Cows and bull in the Park 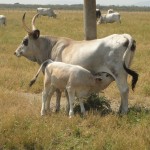 Wild cows in the Park

In the evening, we were again indulged with wonderful food: We had pasta with a tasty bolognese from Maremma cow meat, a crisp salad and some lucious chocolate cream for dessert. Our friendly waiter Rocco cared for us very attentively. After dinner, we still were sitting in the restaurant of Il Duchesco for quite a while with a glass of wine, and we let sink all the unique and noteworth impressions of this very special Maremma Day deeply in our minds. We will come back for sure!