Visit the impressive “Museo Campano” and its unique collection

The amphitheater of Capua looks like the Colosseum. This is the place where the insurgency of Spartaco began. We are in Capua. Here we can find the museum of Mater Matute. It’s a museum full of statues, most of them represent the fertility.

They were not this way, though. The tuff was coated, it was spackled and then painted. In this museum there are statues from the Etruscan period too. All of the statues in this museum represent a beautiful model that is not cool anymore, in fact the archeologists when they found these statues didn’t want to expose them. 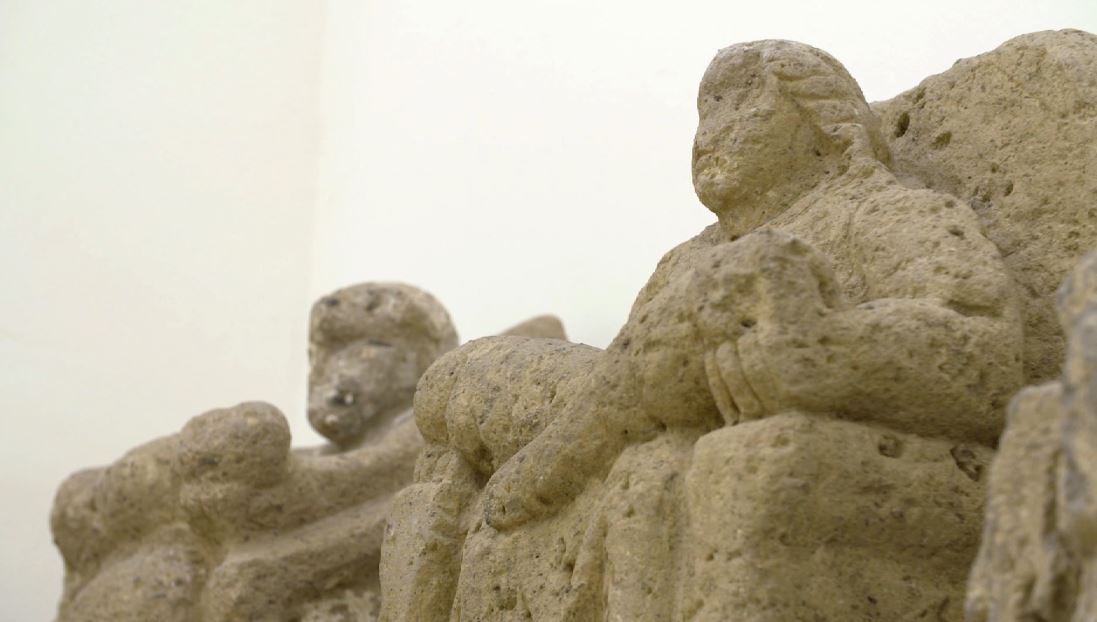 After having travelled around the whole world
it’s finally time to go on a journey with my daughter Zoe.
Tell you what we’ll do – I’ll take you on a tour of Italy, you film me and we’ll be together.
It’s a deal! Let’s go!

It looks just like the Coliseum, but in actual fact it’s the Amphitheatre of Capua.
Do you realise something? This is where the the rebellion of Spartacus began.
The Third Servile War, in 73 BC, was really important.
Spartacus moved to Lucania, then to Calabria and then Sicily.
But the first battle to try and win it back was right here, near Naples.
At a certain point the Consul Crassus took on these gladiators.
But in the end Spartacus died and from Capua, along the entire Appian Way and through to Rome
gladiators were crucified and placed along the roadside.
I know this story as well!

This is Capua Nuova (New Capua), but “new” only up to a point.
This is the Capua that was built after the Saracens had destroyed the Roman Capua.
The story goes back a lot further though.
There were the Osci, the peoples that founded Capua.
It was to become a very important place.
Here in Capua I want to show Zoe a really important and totally unique museum.
It houses ancient sculptures, works dating from as far back as the Osci period.
The museum of the Mater Matutas.
It’s incredible here. It’s beautiful.
The arrangement with the ladder.
Just to think that this could have been the cult statue, the most important,
undoubtedly the biggest.
The tyet, or knot of Isis, has in its hand a pomegranate and a dove.
Look at how wonderful the statues of the Mater Matuta are.
Isn’t that so Professor? What can you tell me?
They were the statues present in this Oscan temple.
A shrine, a huge sacred area, with a boundary wall.
They are probably the statues of the ex-votos that lined the wall.
It’s fertility, the maternal.
An attribute of Matuta is that of Morning Goddess.
The one that brings the dawn, that gives light and that gives to the light
From what period might they be?
Between the end of the 4th and start of the 3rd century BC, and they continue on until the late 1st century BC to the early 1st century AD.
So they are without doubt pre-Roman.
Capua has a really ancient history, and its people are probably the oldest Italic peoples.
Magnificent, it gives me the shivers!
Shall we go and see the statue?This is really beautiful though.
It is a fact that what we are looking at today are some statues that have no outer skin.
In ancient times this horrible local tufa stone full of inclusions was concealed.
It was filled with filler and on top of that there were colours as well.
It was coloured? Like the Etruscan statues!
There’s also an Etruscan period here, the period of greatest wealth for the city.
Which is the oldest and most significant statue?
It’s at the start of the collection exhibition.
And some of these mothers are also a puzzle for us, and we are unable to classify them or place them chronologically.
They have really distinctive characteristics.
This is the one with twelve children, so many!
What also emerges is the characteristic of the powerful woman!
An aesthetic model, something that’s no longer fashionable.
Too fat, never mind…
So much so, in fact, that when the archaeologists found them, why did they never put them on show?
They exhibited and treated them badly.
Early on they used to say: “Why did we buy them?” – “ Why do we have to exhibit them?”
They’re ugly and bloated like toads.
As a matter of fact the mother goddess is always depicted everywhere with large breasts and and a large tummy.
It is the exhibition of the treasure, the fertility of nature, the fertility of the fields.
Let’s not forget the myth of campania felix (happy countryside), the fertile countryside, right here.
What I fail to comprehend is who and what could have made these temples and placed these statues here?
I’d like to look them in the eye to say “well done”!
Well done too to you who have made this great museum.
A museum that’s well worth a visit.