(Read the first day and the second day)

Sunday had arrived. Only the 3rd day in Sicily and it seemed like I had been there for so much longer, both for the different things I’ve seen and done and for the amazing people I had met. It was raining, but despite the weather we were to venture ourselves into the wildlife of the Agrigento Coast and walk on a 11 km trekking trail, to Punta Bianca, a natural reservation under the custody of Legambiente Sicily. It is a beach that stretches out from the Empedocle Port to Licata, with crystaline water and white calcareous rocks that have taken beautiful odd shapes, due to the natural phenomenons. The type of rock is the same as the one building the Turkish Stairway, but this site is less known and popular, but more remote, intact and idyllic. 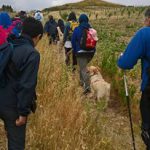 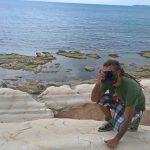 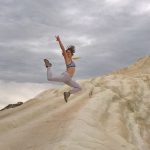 Pierfilippo came to pick me up in his Range Rover giant car, together with Giovanna and other 3 girls from San Biagio, a town near by that I was going to visit the day after. The trip was fun and we got to know each other and again, it seemed like I had known them for much longer. We stopped to have breakfast in a local pastry shop and I had my first Sicilian pistachio croissant and let me say: once you try such a pastry you can never go back to normal ones. It was beyond delicious. We got ourselves some lunch and there I met Totò Panzeca, a member of ANWI Italy and a coach of Nordic walking. Who knew they practised this type of sport in Sicily? I thought it was more a thing from the North. But can you imagine doing sports and at the same time being delighted by amazing panoramic views? One should definitely try it! I rode with Totò on the way to our meeting place with the whole group, where we would start our excursion. Totò told me the benefits of this new and revolutionary sport, and that it brings benefits both for the body and the mind because it is an outdoor sport and because it makes you build a self awareness over your body, the way you walk and how you move. The technique of Nordic walking re-teaches you how to walk and also posture. We reached our car destination and off we went. I met there other interesting people, among which an entire family from Palma with their daughters, others who were involved in environmental and cultural associations, and other who were there simply because they loved nature. I got a chance to talk to all of them and we made quite a TEAM!

We reached Punta Bianca in not too long and we stopped to admire the great view. It is a place where one would come to have a moment of solitude and reflection. The silence, the waves, the warm wind, the colours and the contrasts, left me speechless. We met there Tommy Lopez, who was taking some pictures of the landscape. I got a chance to talk a bit to him too. I heard of him through Pierfilippo, because Tommy, as Pierfilippo shares the same love and devotion for his “terra” and he likes making others know the beauties of his land. Together with the Lopez family, aka The Lopez Crew, who owns a beautiful sailing boat, Tommy organizes beautiful trips along the Agrigento Coast. There are half day trips that start from morning till after lunch, with different diving spots and beach moments at Punta Bianca or the Turkish Stairway, with lunch on board, cooked with fresh ingredients on the spot, or that start from after lunch to evening with dinner on board, when one can enjoy the breathtaking view of the sunset. And you know what they say: there is nohing like the Sicilian sunset! After the chat with Tommy, we continued our walk towards the castle, where the Mayor of Palma di Montechiaro would welcome us. We walked in line, along this tight path in the middle of the grain fields, mountains on the left, and sea to the right. We stopped several times to take pictures of the wild landscape and thereafter we went downhill on this remote, tiny but beautiful beach, to have lunch. A memorable picnic that was!

We continued walking towards the castle, that we could spot from afar, on top of a cliff. I had finished my water, but the girls didn’t hesitate to offer me everything they had: cold water, ice tea and snacks. One would never think to find this type of hospitality in people one has known for such a short time. I felt like home with these people and like I was part of something, of a mission that we were going to accomplish together. We finally got to the Castle of Palma di Montechiaro and although a bit worn out going up the hille, we completely forgot about all the fatigue when we reached the castle and looked behind us. The view was incomparable. I imagined for an instant what could have been like living in a place with such a view. I got carried away looking at the stretch of beach downhill, that I later found out was called the “mermaid beach”, pure splendour. 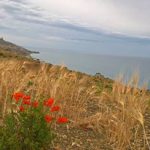 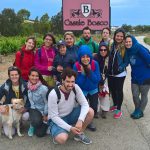 Part of the group at Casale Bosco

At the castle, we met Pasquale Amato, the mayor of Palma di Montechiaro, the town we could spot from the castle terrace. He was very friendly and welcoming and after telling us the story of the castle, which used to be a very important place for trade and commerce in the Medieval times, he told me a bit about his story. On the way back I rode in the car with the mayor, and he told me a bit about his “mission” in Palma and his battles against local criminality and how things have changed ever since he’s been around. Another person, another story, the same values. Everyone I met there was joined by the same love, devotion and passion for their own land. You might think it’s repetitive, but I myself find it quite rare. It is rare to find people that care so much about their home town and that are so hospital and welcoming. I will never stop appreciating this and I think if every single one of us would feel this way, we would be all living in a better place. View from the castle window

The day was over, I was physically tired, but mentally and emotionally full, of energy, of memories, of places and people that I knew I would not have forgotten in a long time. I went to bed, rewinding in my mind the magic of the places I had seen and slept like a baby.