Sicily is a great place for cycling holiday

In my mind Sicily is an exotic place because I went there for the first time as a child, during my very first journey with my parents. I remember I was astonished for the huge contrast with my homeland in the north of Italy: nature, climate, tastes and smells, everything was so different. By plane Sicily is just one hour and half far from my place and I feel good about it. In a little while I can reach such a fascinating region, where winter is not so hard.

Sicily maintains the Arabic and Norman aesthetic, cultural and historical influences. In the 17th century, the French cooks Monsù mixed their cuisine with the local one, obtaining a great result: Sicilian cuisine is both tasty and light, thanks to the great local natural ingredients. Thank God Sicily does exist!

I’ve seen most of Sicily, but it is never enough. I visited Palermo and the area of Agrigento whether for land and sea, then Trapani, Egadi islands, San Vito lo Capo, Cefalù, Enna. Then the Sicilian east side, that runs from Messina to Capo Passero. Some locals I met, let me see the amazing baroque features of Ragusa Ibla. I’ve also discovered the typical cheese of Ragusa and the chocolate of Modica, cooked the way the Native Americans did. 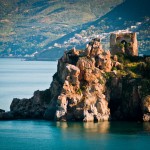 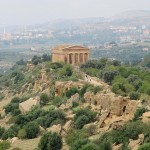 Agrigento, Valley of the temples, pic by Alain Muller 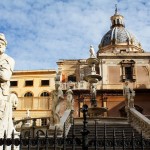 I must confess. I also acted the common tourist and I went on a tour looking for the set of the famous Italian book and TV series “Il Commissario Montalbano”: Montalbano’s house in the imagined village of Vigata. I would always come back there.

What about bike tourism?

Let’s do some ecotourism by bike! I love cycling holidays and Sicily is a perfect place to travel by bike. This land always leaves me open mouthed. Both for admiration and surprise about natural views and historical architecture, and for local cuisine! The mastery of Sicily in its cooking tradition and the taste of local products are peerless, as I said before.

Sometimes I open my mouth to shout against the aesthetic and environmental pollution of my beautiful Sicily: buildings growing everywhere, sheds, greenhouses built without skills, bleak suburbs… These kind of issues are spread almost all over Italy, but the decay of Sicily makes much more angry. These criticisms are more significant if you travel by bike: a slow tour makes you enjoy the beauty of the landscape, but it makes you notice all the ugly aspects at the same time.

Palermo has its own international airport connected to the city centre by a bus (rides every 30 minute, many stops in different part of the city, 6€). For transcontinental flights you have to stop in other airports (Rome, for example).

The best way to visit Palermo is on foot. About the public transports, in Palermo you can pick both bus and tram: single ticket 1,4€ for 90 minute ride.

Palermo is the capital city of the region Sicily, a big island in the South of Italy. The long history of the city and the succession of many different civilizations gave it a remarkable artistic and architectural heritage. Italian Capital of Culture in 2018, Palermo is the main seat of the UNESCO World Heritage Site Arab-Norman Palermo and the Cathedral Churches of Cefalù and Monreale. Most of the must-see monuments is located inside the city center; others are distributed throughout the territory of Palermo: historic villas, watch towers, rock paintings, ancient churches or noble palaces. You really should attend the St. Rosalia Festival on Semptember 4th and July 15th, it is a very good experience.

Choose carefully where to sleep. The best areas for tourists are the city centre, Kalsa and Mondello (on the seaside). We should recommend you to avoid some urban areas like Cuba, Zen, Brancaccio, Zisa, Falsomiele, Uditore and Cruillas.