You think you know, but you have no idea!

Travelling is like therapy to me, it is something I need beacuse I can’t do without. It becomes part of who I am, as I am the togetherness of the different memories and experiences I have so far lived in my life. It took me some time to figure out that I suffer from the traveller’s virus. It is important to understand the world we live in, and the only way we can accomplish that is by moving places and meeting locals. Discovering new landmarks, lifestyles, food, values, dialects and life rythms. No play it safe. But dare, try, meet, experience, challenge yourself. Diversity at the purest state.

Trips like this leave an important trace in your memory and most of all in your heart. Diversity then enriches you, opens your mind, makes you have less prejudice towards people or cultures that are simply different than yours. At the same time it makes you see similarities that can sometimes resuscitate in you feelings and memories long forgotten. Before I left for Sicily I didn’t go into a lot of research on the place I was going to see. It didn’t matter. I was open, like a white canvas in a painter’s hand. My mind was open to be filled with memories as my soul was to embrace new emotions. They say While in Rome do as Romans do. And so I did.

I got off in Trapani, and the first thing I did was that of getting myself a nice treat: a huge ricotta and chocolate pastry.  Then, I got on the bus to Agrigento. I let my mind get carried away by the natural landscapes flowing like the scenes of a movie in front of my eyes. The golden grain fields, the palm trees, the lemon trees, the view of the sea filled my heart with excitement. I passed by the town of Ribera, which is famous for its most delicious oranges and Sciacca, to then arrive at Agrigento, Pirandello’s home town.

I was ready for the unknown. I had no idea what my trip would be like and what I was going to see. Claudia, the president of Legambiente Sicily and Lulù a friend and a colleague of hers came to pick me up at the bus station. We went first to a bar to have some quick meals: delicious street food like fried calzone, panelle and arancini. I changed myself really quickly at the bar and then we drove towards the beach. We passed by Empedocle Port, which has a long history of strategic importance dating back to the 1400’s and it still is today the most important sea port in the SW of Sicily. Then, the most stunning view of contrast and immensity: Scala dei Turchi, the “Turkish Stairway”. Its name dates back to the Turkish invasions. The invaders used to climb their way up into the city on this natural stairway.  What they often didn’t consider was the fact that that was a strategic point also for locals, who could spot invaders from the same cliff. It is a cliff shaped by nature as an immense white stairway, that you can “climb” and from the top of which you can admire the great panoramic view. I dived in the blue crystal water and swam my way closer to the cliff. A sense of freedom took over me as I was climbing up the natural immaculate landmark. When I finally got on to the top, I looked down and then over towards the horizon. 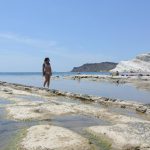 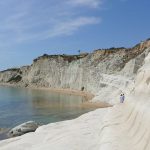 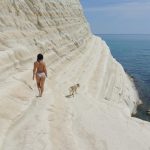 It was breathtaking, a feeling of infinity that only nature can offer you and that I had rarely felt in my life. It filled me up. I had to sit down for a moment and enjoy the silence, the wind caressing my hair and the warmth of the sun embracing my skin. It still gives me goosebumbs when I think of that moment and that unique view. Looking down, you could see contrasts of colour: the emerald green of the seaweed, the darker green rocks, and the saphire blue sea.

Thereafter we headed towards Sant’Angelo Muxaro, where I was to sleep for the following nights. The landscape was breathtaking: a combination of warm colour shades from light green to yellow, the silent hills, the fields of grain, and some houses here and there, peaceful landscapes that made me forget about the buzz of the city. Then, as we drove, we got closer and closer to this majestic view: the Necropolis of Sant’Angelo Muxaro on top of a tall hill. You could see the houses, the rich vegetation of olive and pistacchio trees at the bottom of the hill, and the ancient tombs of the long gone natives. The town has a very mysterious past and thanks to archeological expertise more is known today, but still it is all a bit undefined. There are many leggends and myths connected to the first settlers of this town, that date back to the XIII th century before Christ. The natives of the town are known as Sicani and Sant’Angelo Muxaro known as the ancient Camico, capital to the kingdom of this mysterious population. Many objects were found in the tombs and one of the most important is the “golden cup” or la patera aurea that can be seen today at the British Museum, and in a bigger version at the bottom of the hill when entering the town. You can admire and understand more about this fascinating settlement at the MUSAM, the archeological museum of the capital of Sikania. 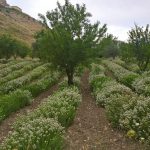 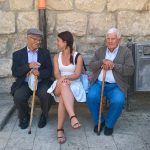 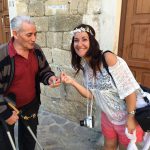 When we arrived in the town, it seemed like time has stopped somewhere in the past: the rythm of the village, people socializing in the main square, elderly sitting at the bar talking politics and daily matters. Their eyes turned towards us but I never once felt them scrutinizing me. Just a friendly look of someone who is curious to know more. We went in the backyard of this lovely building in the middle of the main square, and we went up the stairs. I opened the door and was impressed by the view of this wonderful apartment. My room was stunning and made me feel like a queen. This was a sign of huge hospitality. A feeling like that cannot be experienced when you enter a hotel room. This felt like a home and for the few days I was there it was my home. Maria Rita came to welcome me and also Carmela who immediately gave me the keys to her house as if we were old friends. This feeling of trust surprised me and made me give them in exchange the same trust. After having explored the whole house, we got a little hungry and we went to have pizza at a restaurant in town. There I met the most amazing Pierfilippo Spoto who was to guide me throughout the remaining days.

At the pizzeria I also met a group of young people, who told me about their cultural association called Giosuè II De Marinis and the activities they organize for their home town, despite the fact they live and study in bigger cities in Sicily like Palermo or Catania. What amazed me was their love and devotion to their home town, which is something rare nowadays, when due to socio-economical factors a lot of the youth decides to abandon the places they grew up in and move to bigger cities. These youful young people bring life to this ancient town, in an admiring effort to preserve ancient traditions and local culture. Despite the different obstacles they encounter, they never give up and their determination raised a sense of admiration in me.

Pierfilippo took us on a late night land rover tour around the necropolis which was illuminated by night and left me speechless. He told me about the reason behind the tomb disposition, and that the common people were burried at the bottom, while the nobility on higher levels. You could spot the “prince’s tomb” from afar because larger and more illuminated than the rest. Then something I couldn’t capture on camera but that I keep in my heart, was the view of the stars that made the sky sparkle like little pieces of diamonds. You never see this in the big city. I went to bed late that night, happy and full of emotions and the next morning at 7 I was ready to go…