The Tyrrhenian Sea between the regions Liguria, Tuscany, Sardinia and Lazio is one of the most beautiful places in the world, especially the islands if you have the chance to sailing across them and stop by.

Ponza is a couple of hours far from Formia by ferryboat, it takes less by hydrofoil. There are ferries leaving from Naples, Terracina or Anzio. Ventotene is connected to Formia, Naples and Terracina either, but not the whole year round, better to check the timetables to choose your suitable transfer. They are small islands, but it takes some days to visit them carefully: Ponza is big enough to deserve a full weekend, while Ventotene is just 1.5 squared km wide, but it is full of things to do and see. It is a matter of atmosphere, right? The atmosphere is due to people and to history. Let’s revise a bit: Ponza and Ventotene belong to the Pontine Archipelago together with Palmarola, Zannone and Santo Stefano islands. The first inhabitants came here by the 5.000 b.C., actually. Then the Phoenicians, the Greeks, the Etruscan, the Romans all passed by. It means that you can find in the Pontine islands a lot of archaeological sites and ruins, indeed! After the Romans, came the monks who tried to start some farming, but the drama of Saracen pirates started a long era of fighting and naval battles to conquer the area. The Turkish, the Duchy of Parma, the Austrians, the Popes. There is no peace in here, you know! 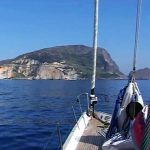 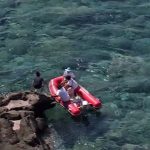 Ponza, coming by the sea 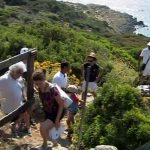 The Romans hit it hard around here, stuffing Ponza with many Villas, as golden exile places for guilty nobles. There are a lot of Roman ruins, of course: Villas, but also several ancient tanks and the tuff tunnel connecting the harbour area to the beach of Chiaia di Luna (one of the jewels of Mediterranean Sea, together with Cala Fonte and Cala Feola). Ponza is always crowded, but tourism doesn’t change it much: the shops, the fish market, the fishing vassels with fishermen fixing their nets, the cafès on the main stair. It is a real community, exploiting tourism without losing identity. Coming from the sea to Chiaia di Luna, hike up to Punta del Fieno and discover the amazing terraces vineyard. 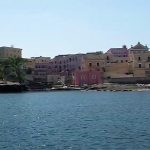 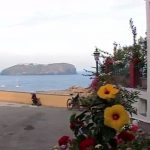 When in Ventotene don’t miss the Roman harbour, the ruins of the Roman Villa d’Augusto where Agrippina was exiled by Emperor Tiberio, Claudia by Emperor Nerone, Flavia by Emperor Domiziano. The monumental stair leading from the harbour up to the high town is made by the Bourbons, from the top enjoy a great view of St Stefano island. All around is a protected marine area where you can dive asking for a specific permission and guides. Ventotene is a small island, full of highlights: the little houses and the alleys, the museum inside a castle on the main square, the ornithological observatory. What I like the most is looking at the tourists walking by, while having some almond milk or a granita at the cafè.